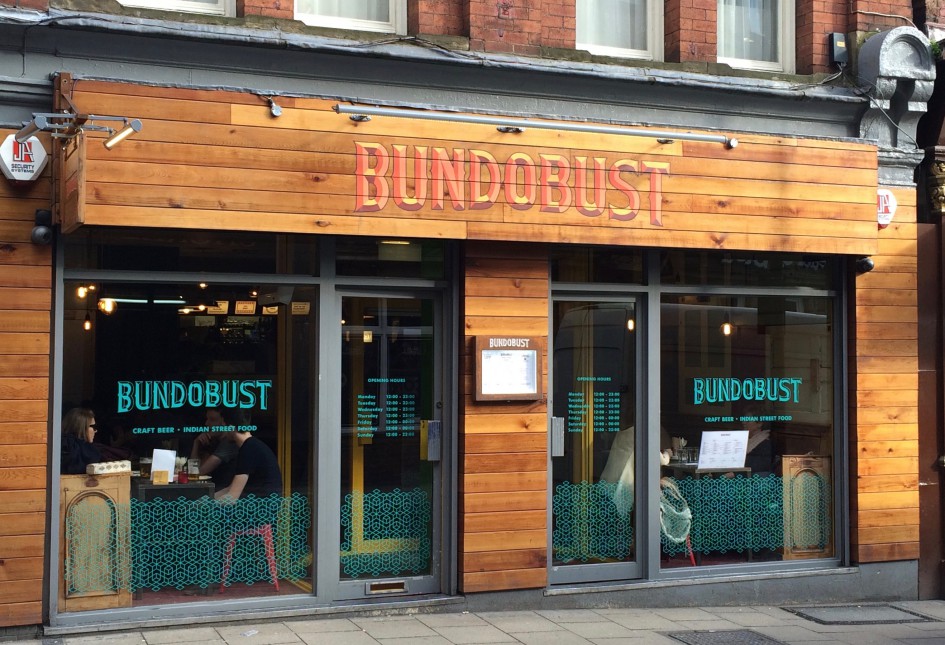 You may be surprised to hear that despite being raging carnivores (I like my meat to come with a side order of meat) one of mine and James’ favourite places to eat in Leeds is Bundobust – a craft beer bar selling vegetarian, Indian street food.

I actually first heard about Bundobust when I used to work for a PR agency and one of our clients, a local law firm, advised on the letting for Bundobust’s premises. Shortly after, I saw there was a Bundobust stall at a punk veggie festival (!) at Wharfchambers selling Bundo Chaats. The Bundo Chaat is a little pot of glee – it’s a cold dish made of samosa pastry, chickpeas, potato, tamarind chutney, yoghurt and turmeric noodles. It’s both creamy and crunchy, savoury and sweet, and it is delicious.

I went to Bundobust pretty much as soon as it opened on Mill Hill (a street you’d never normally bother with although is now becoming more popular due to the likes of Bundobust and the Head of Steam). Bundobust is a joint venture between the guys at The Prashad and The Sparrow Bier cafe. Although I’m not a beer fan, it doesn’t matter as I always think of Bundobust as a place to get a great lunch or go for post-work snacks, rather than just a bar. 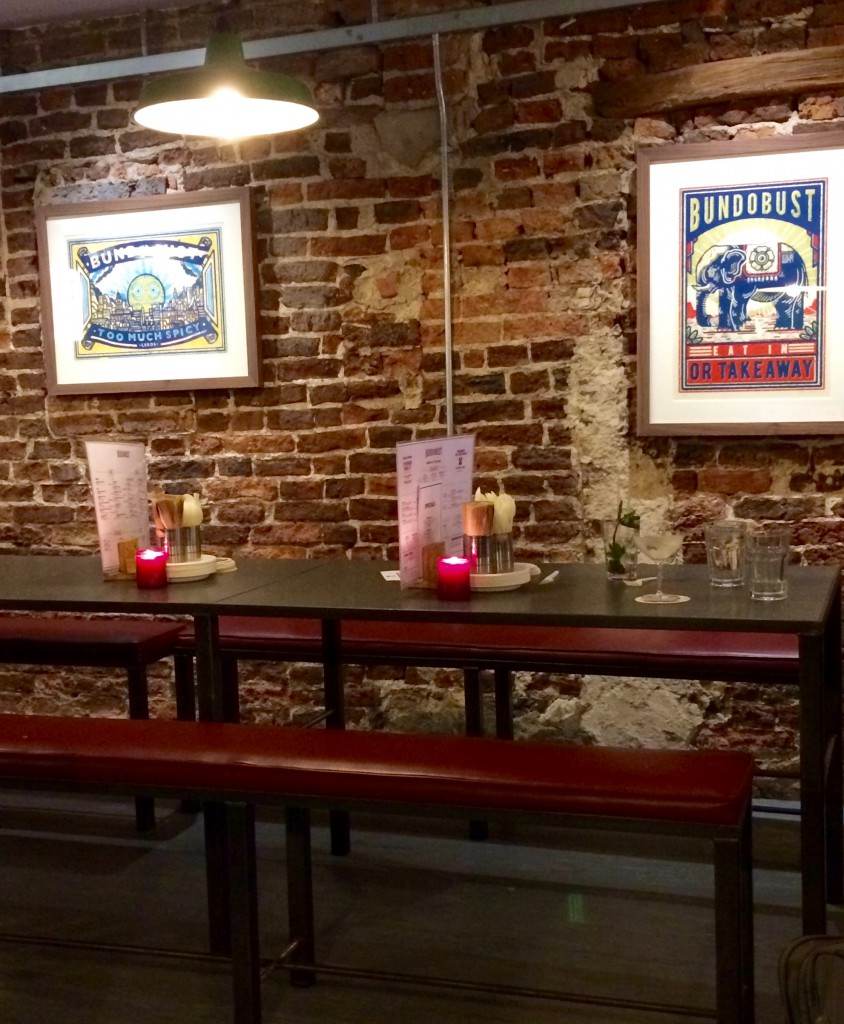 I definitely recommend the okra fries – we get them every time we go – and I wish cinemas sold them instead of popcorn. I’d happily munch through a bag of okra fries watching a film! Their onion bhajis are also amazing. I’m not normally that bothered by onion bhajis as I find them a bit greasy, but these are lovely and crisp. The amazing Bundo Chaat I’ve already mentioned – James and I tend to get a Chaat and okra fries to share and will then get a hot dish each. The Vada Pav – a mashed potato ball served in a brioche bun with chutney – is another of our favourites. You can’t really go wrong with any of the dishes though. 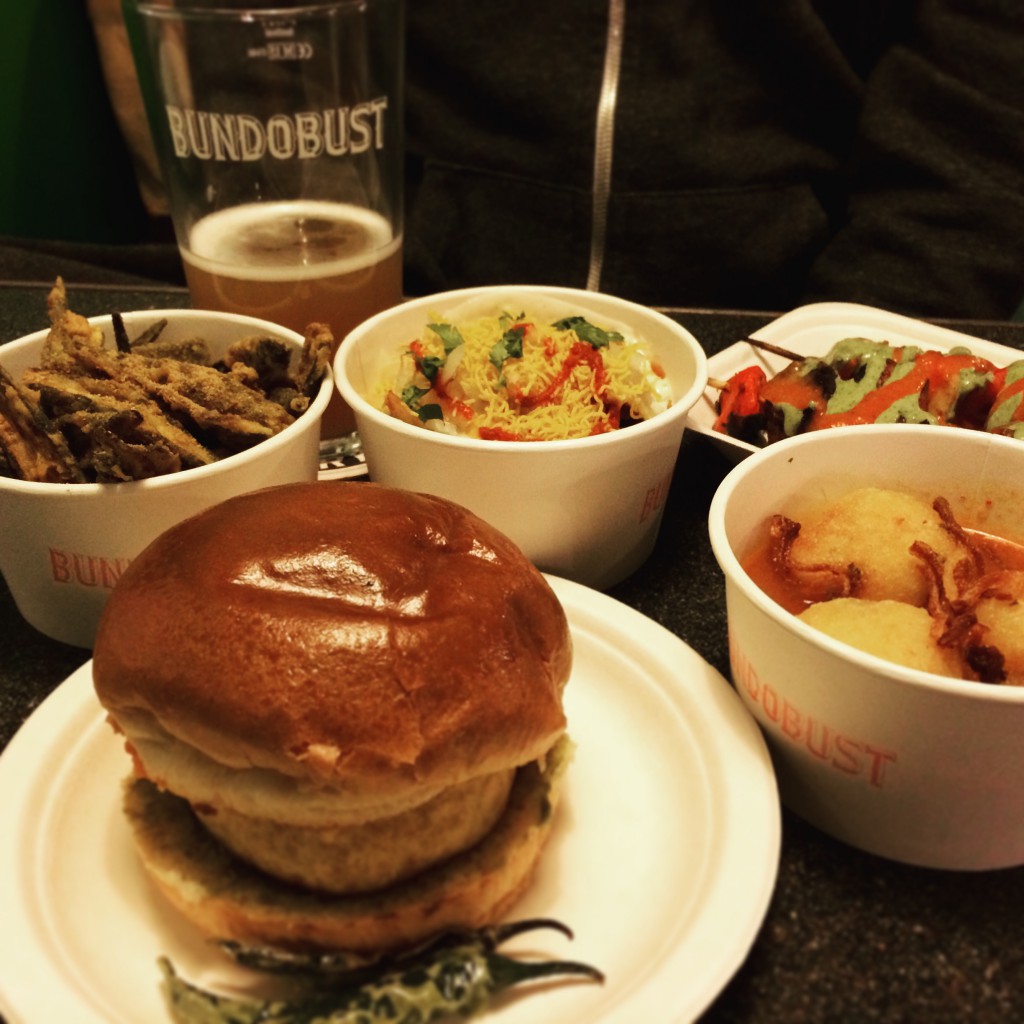 If you’re wanting quite a few pots to fill you up, it’s not cheap, particularly if you’re washing it down with some pale ale, but it’s worth it. You can of course just have a dish as a small snack – although I never have the self-discipline to do that – and not have to spend loads.

There are quite a few vegan and gluten free options on the menu, and despite it being a bar, we often see families with toddlers in there. The staff are friendly and it’s really close to the train station. It can get quite busy though so you’re not always guaranteed a table.

Bundobust is so good, you don’t even notice the lack of bacon – and that’s saying something.