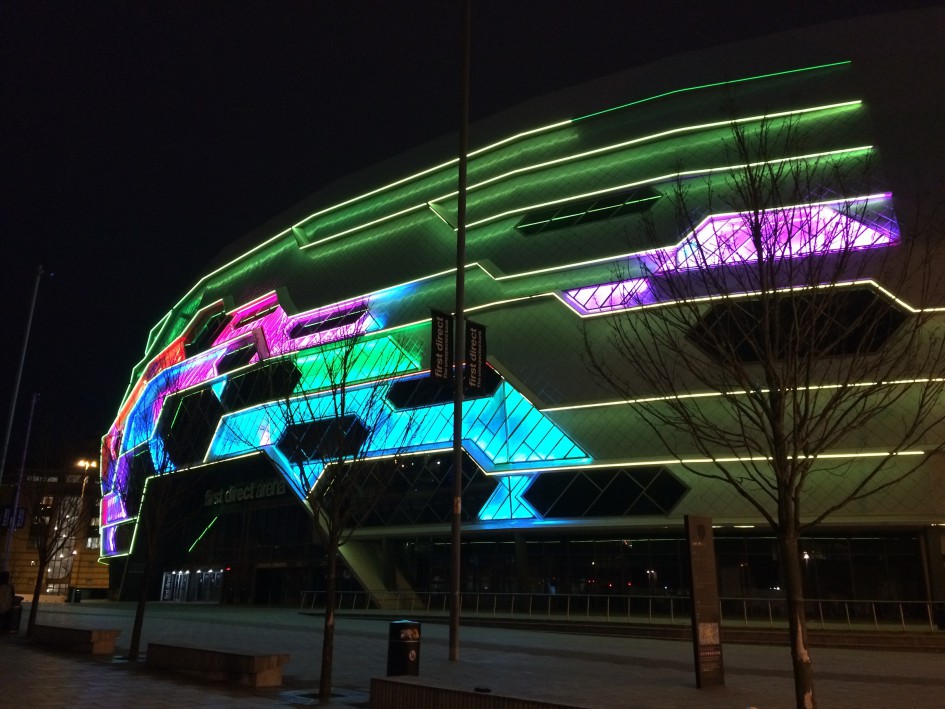 Okay, so my title for this blog post is a little misleading as we’ve actually had the First Direct Arena for a few years now, but after waiting for an arena in Leeds for ages, it still feels very new to me.

I’m amazed that I’ve hardly written about music venues on this blog so far. I used to go to a gig nearly every week in my teens, and am a little sad to think it’s such a rarity for me now. There are some lovely venues in Leeds, like the Brudenell Social Club and Howard Assembly Rooms, which I’ll hopefully get a chance to visit and blog about soon.

The First Direct Arena opened in autumn 2013. I remember writing a blog post in my first PR job about the arena and how Leeds residents were getting quite heated about who should be the first act to play – homeboys The Kaiser Chiefs, or international pop legend Elton John. It turned out to be neither as Bruce – The Boss – Springsteen got the honour of being the first artist to play there.

I have always loved Leeds, but its lack of arena used to frustrate me so much. For somewhere with such a vibrant arts and culture scene, and amazing musical talent, it was so disappointing that most big acts would miss Leeds and instead play at Sheffield or Manchester. When I was at university in Liverpool, the Echo arena was built, and although that was great when I was student there, it made me even more frustrated that Leeds still didn’t have its own large venue.

(As a side note, I went to watch the MTV Europe Music awards with my very awesome friend Nicole at the Echo arena. The producers were looking for people to be in the crowd, so we got free tickets after auditioning – yes, you read that right – to be in the audience. I had to cheer loudly and then bop along to The Ting Tings. Every time I hear That’s Not My Name it always reminds me of that very surreal moment where I was dancing in the auditorium with strangers just to show I could look enthusiastic. The awards night itself was amazing. We were in the closed off area behind the V shaped stage and were just feet away from artists like Kanye West, P!nk, Take That, Duffy, Katy Perry and The Killers. A few days before, we were also asked to go down and and be filmed being in the audience for a pop star’s video. I can’t even remember who it was, someone from the Ukraine perhaps, but it was such a laugh to just scream and shout and dance along.) 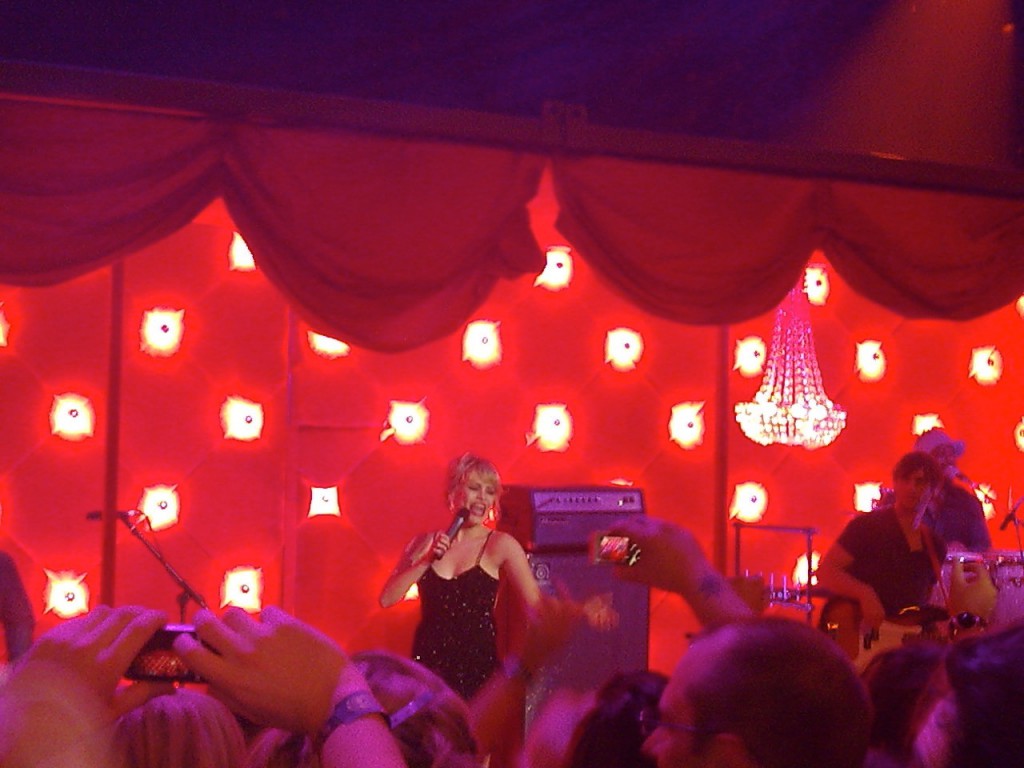 I didn’t see anything at First Direct Arena for a while. After my initial excitement of it opening, it seemed to cater for an older audience, with the likes of Il Divo and Wet, Wet, Wet. Now it has an incredible range of acts though, and it’s not just music. The arena hosted BBC Sports Personality of the Year shortly after opening and has also hosted Premier League Darts. Coming up, there are wrestling events, Disney on Ice, and plenty of well-known comedians.

The first event I went to at the arena was to see street dancers Diversity with our friends Sarah and Paul. (And we’re not ashamed of it!). I’d heard that the arena was so good because no matter where you were sat, you felt close to the stage, and this was true. The tiered seating is quite steep so you feel higher up rather than further away. The seating area is in a semi-circle facing the stage, so there are no bad side seats where you get a cricked neck from looking over your shoulder all evening.

I saw Stereophonics just before Christmas and we were sat right in the heavens as we’d been a bit slow to get tickets. Obviously it would have been better to be sat closer to the front, or to get standing tickets, but it didn’t feel like we were miles away and out of the action – unlike at Manchester or Sheffield arena. 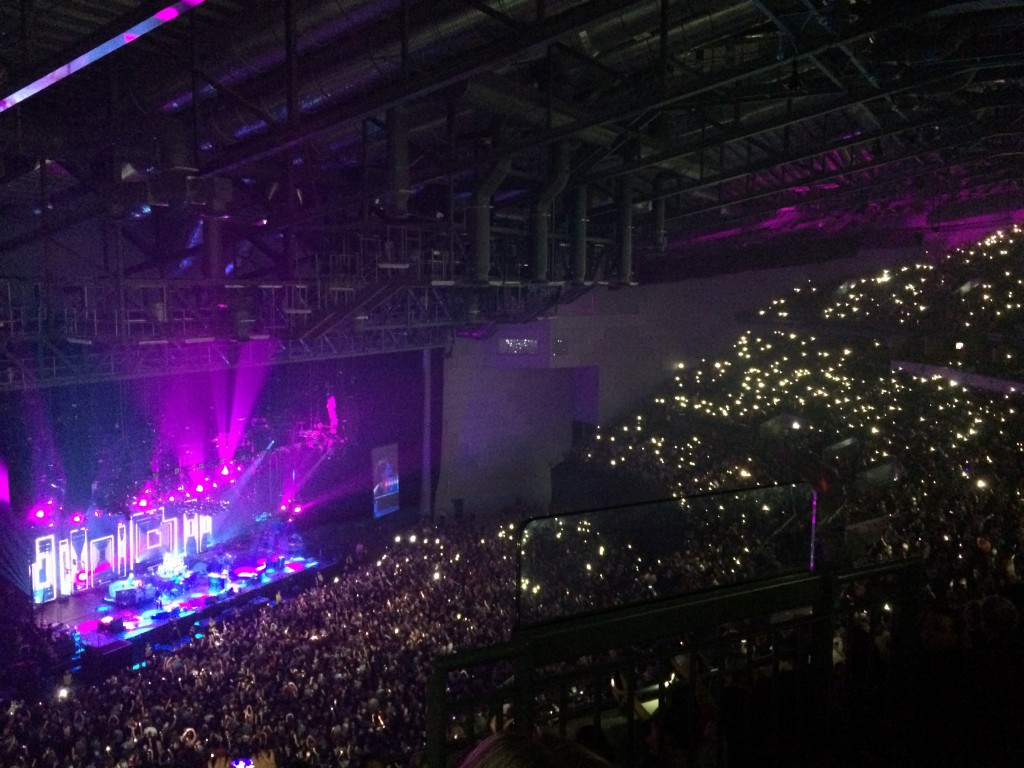 Phone screens lighting up the arena at Stereophonics

For my birthday in February, James and I went to the Carnival of Madness tour which featured American rock bands Blackstone Cherry, Shinedown, Halestorm and their support act Highly Suspect. This was the first time we had standing tickets and it was brilliant. I don’t do too well in large crowds and was a bit worried about getting a panic attack, so had decided beforehand to stand at the back. The standing area is so small though, you can still be at the back (or near an escape route!) and be close to the stage. Apparently Leeds arena almost has the capacity to rival Manchester arena, but it definitely doesn’t feel so large.

Both Stereophonics and the Carnival of Madness bands were amazing. I vividly remember first hearing Stereophonics when I was about 10, after they were on a compilation CD that came free in a box of cereal. I learnt all the words to A Thousand Trees and I still HAVE to sing along to it every time I hear it even now.

All the Carnival of Madness acts were brilliant as well. Highly Suspect did a great job of warming up the crowd for the three headline acts. I’m a fan of Lzzy Hale, the lead singer and guitarist of Halestorm – the voice on that woman! – but was actually blown away by the band’s drummer. He had so much energy! I’ve never seen someone jump about (literally) on a drum kit that much before. Shinedown did a brilliant job of getting the crowd dancing and singing along – even those in the seating area. It sounds cliché, but you could really feel the electricity in the room when he started getting the audience involved. And then Black Stone Cherry finished the night off with pure, raw talent. Again, the lead singer’s voice is just amazing. I’d definitely recommend seeing any of them next time they tour.

The whole night itself was just really enjoyable. Rather than having to drive to Sheffield or Manchester, we just had a 5 minute train journey. We had tea at Bundobust and 2-4-1 cocktails in Rum and Raisin, then just walked in to the arena without having to queue and joined our friends for cocktails in Blind Tyger afterwards.

The First Direct Arena has had a good effect on the nearby area, particularly the Merrion Centre, and there are now some great places to eat and drink within the vicinity. I’d recommend going for tea at Smoke BBQ beforehand and then some drinks at the Belgrave or The Social afterwards.