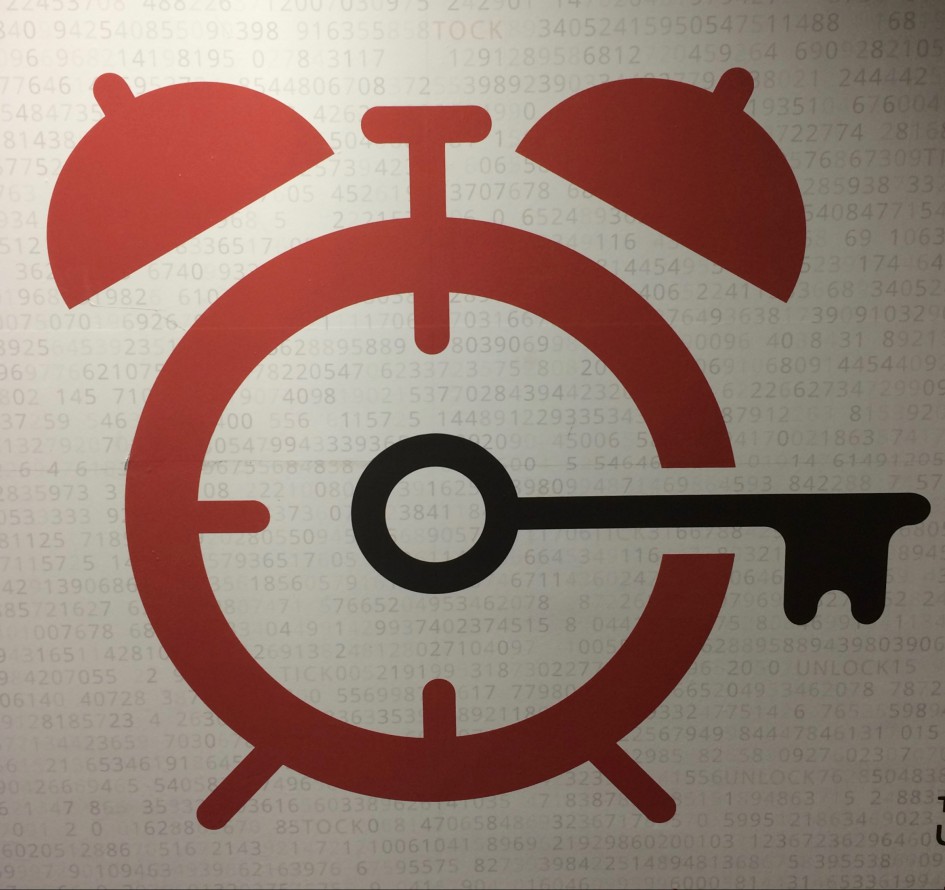 Instead of getting each other tangible presents, my friend Lorraine and I buy each other experiences for our birthdays. This year she’d booked us and the James’s in for a game of Tick Tock Unlock – “a simple and exciting real life escape game…”

Escape games seem to have become a popular trend over the last few months and I was looking forward to giving it a go. At Tick Tock Unlock you have to “escape from the room in 60 minutes by solving a series of puzzles, unravelling clues, and working together as a team…”

This is one of my shorter blog posts as I don’t want to give anything away and spoil the fun, but I will say that the four of us had a really good time.

You don’t need any kind of general knowledge to be able to solve the problems (thank goodness) and the hour passes by really quickly. You can have three to six in a group, but I reckon four is probably the perfect number. There are no physical challenges (other than looking around) and it’s suitable for kids (minimum age nine with an adult or 15 unaccompanied.) There are two of the same rooms, so you can have teams compete against each other as well. 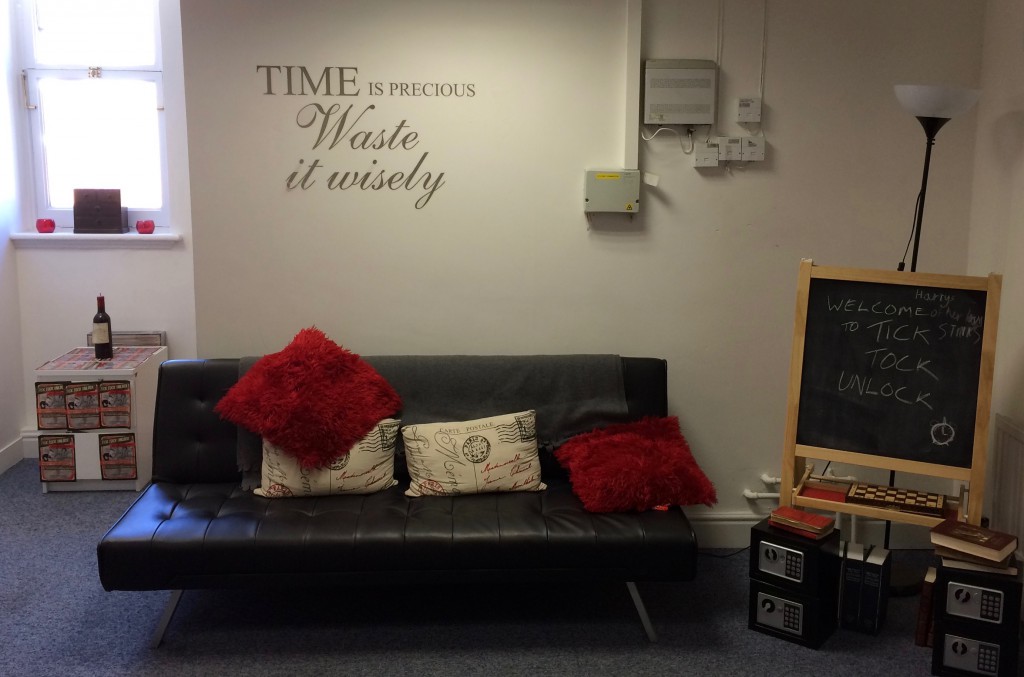 Someone from the company gives an introduction, explaining what you have to do once you get in the room and how to work the different locks. The member of staff watches from a different room as you try and solve the puzzles, so if you’re really struggling, hints will be provided. This was really good as we thought we might get generic, pre-programmed tips, but instead we received tailored – albeit cryptic – clues.

After the game you’ll kick yourself for the things you wasted time on yet also feel very smug about the puzzles you solved quickly. The lady who gave us tips during the game spent some time afterwards going through what we tripped up on and what we did well which was good, and meant we didn’t feel rushed out of the building after we’d finished.

The only thing I would say is be careful who you go with! Our group of four worked really well – no fall outs or bossing around and we all have different skill sets, but I can imagine certain groups (*ahem* dad and Dan *ahem*) getting quite irate with each other.

It was great to do something different on a Sunday afternoon and I can imagine Tick Tock Unlock being really popular for birthday parties and hen/stag groups.

We can’t wait for some new rooms to try and escape from! 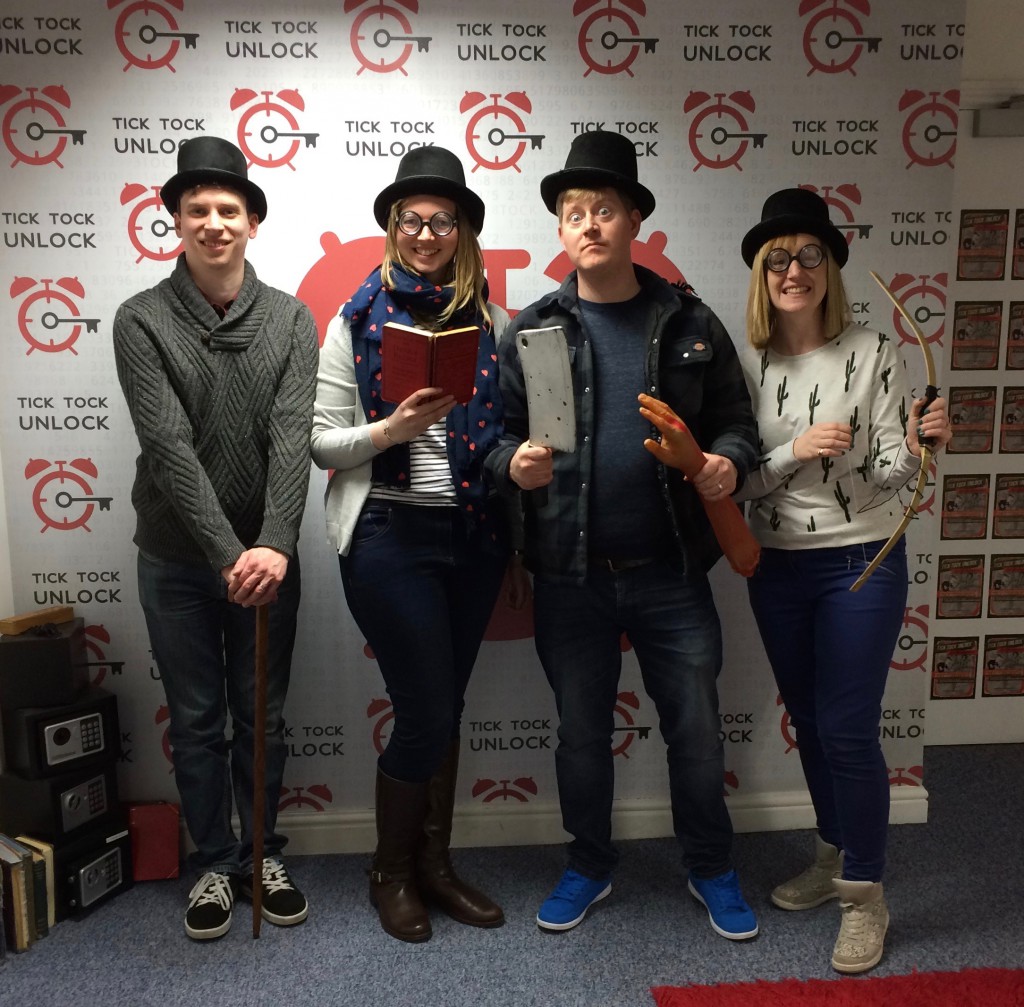 The props have nothing to do with the game, but were fun to pose with afterwards

UPDATE: The four of us returned to Tick Tock Unlock six months later and managed to escape from their new Alice in Wonderland themed rooms. This was as much fun as the first challenge, and we enjoyed it even more as we actually managed to get out of the room with 5 minutes to spare this time! We even beat a record on one of the puzzles.

It’s a great concept if you’re an Alice in Wonderland fan, but you don’t have to know the book or films to solve the puzzles. (Just to warn you – this is on a different site to the other Tick Tock Unlock rooms and there are no toilets.)

Doing the other room first definitely made this easier as we knew how to approach the clues, but it was still satisfyingly tricky. We’ll be back to try and escape from more rooms soon! 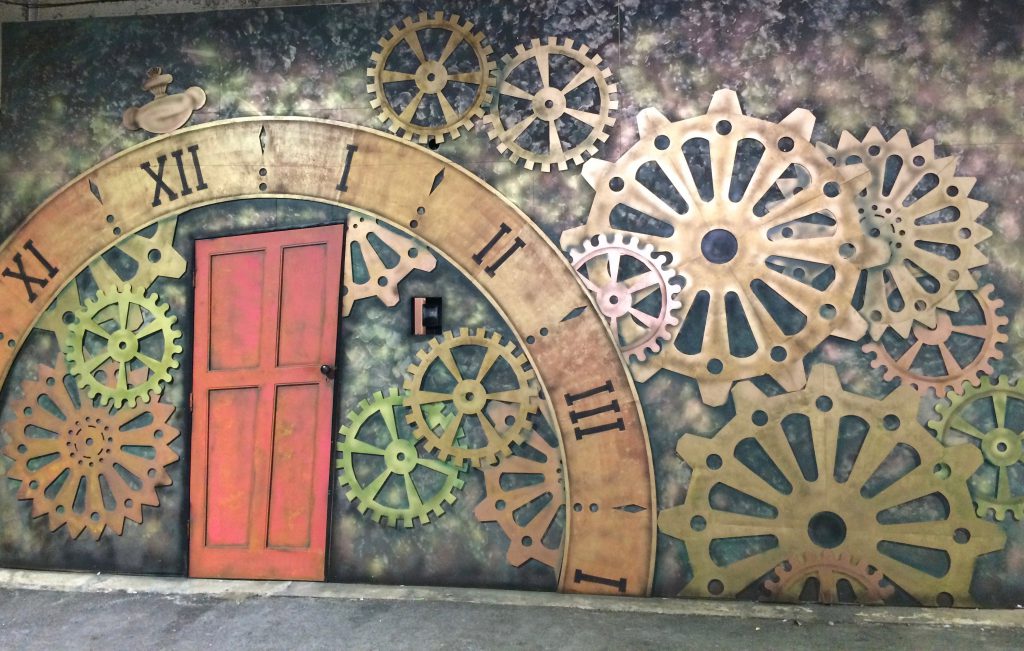 Down the rabbit hole we go…