Sipping cocktails at the Botanist 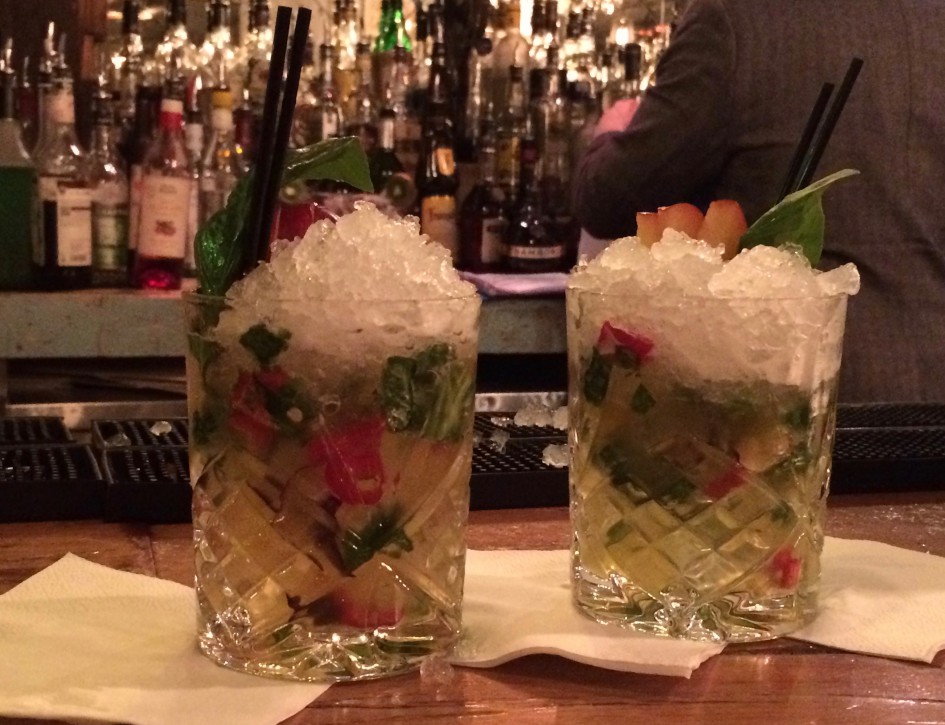 I was lucky enough to be invited to try out the new cocktail menu at The Botanist on Thursday.

The Botanist is a bar and restaurant located at the bottom of Trinity Shopping Centre. As the name suggests, there is a bit of a greenhouse theme to it and the area has been kitted out to feel as though you’re in someone’s really posh garden shed.

I didn’t actually go to the Botanist that often when it first opened as it was always so busy, but have been a few times since on quieter evenings and always have a great time there. It’s one of the few places that still puts on free, live music to listen to when you’re enjoying your drink (as opposed to purposefully going to a gig.) In fact, my brother and sister-in-law actually got to hear their wedding band play here (as an acoustic duo) before hiring them for the big day.

We were treated to a bit of a cocktail making class and got to try a number of new cocktails at Thursday’s event. The first was a Blackberry Mint Julep, made with bourbon. It’s bloomin’ gorgeous. It tastes like a proper summer drink and was sweeter than most whiskey based cocktails. 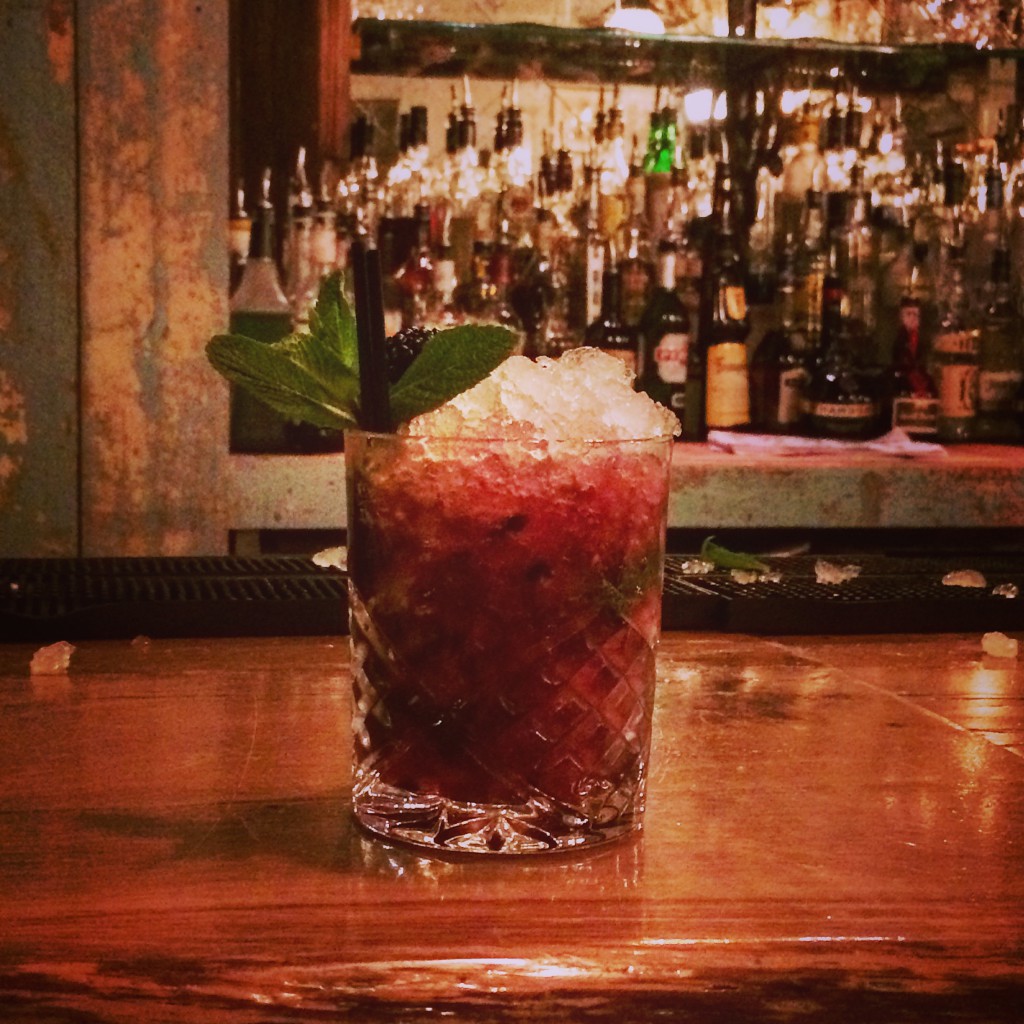 Next up we tried a Kiwi and Sage Martini. It looked good, but admittedly I wasn’t really looking forward to trying this one as I’m not that keen on kiwis, and sage in a drink sounded odd, but it tasted really good. There’s a froth on it (like you get with Amaretto Sours) which I’m a fan of. The sage gives it a savoury flavour, and like with the Blackberry Mint Julep, tastes really summery. 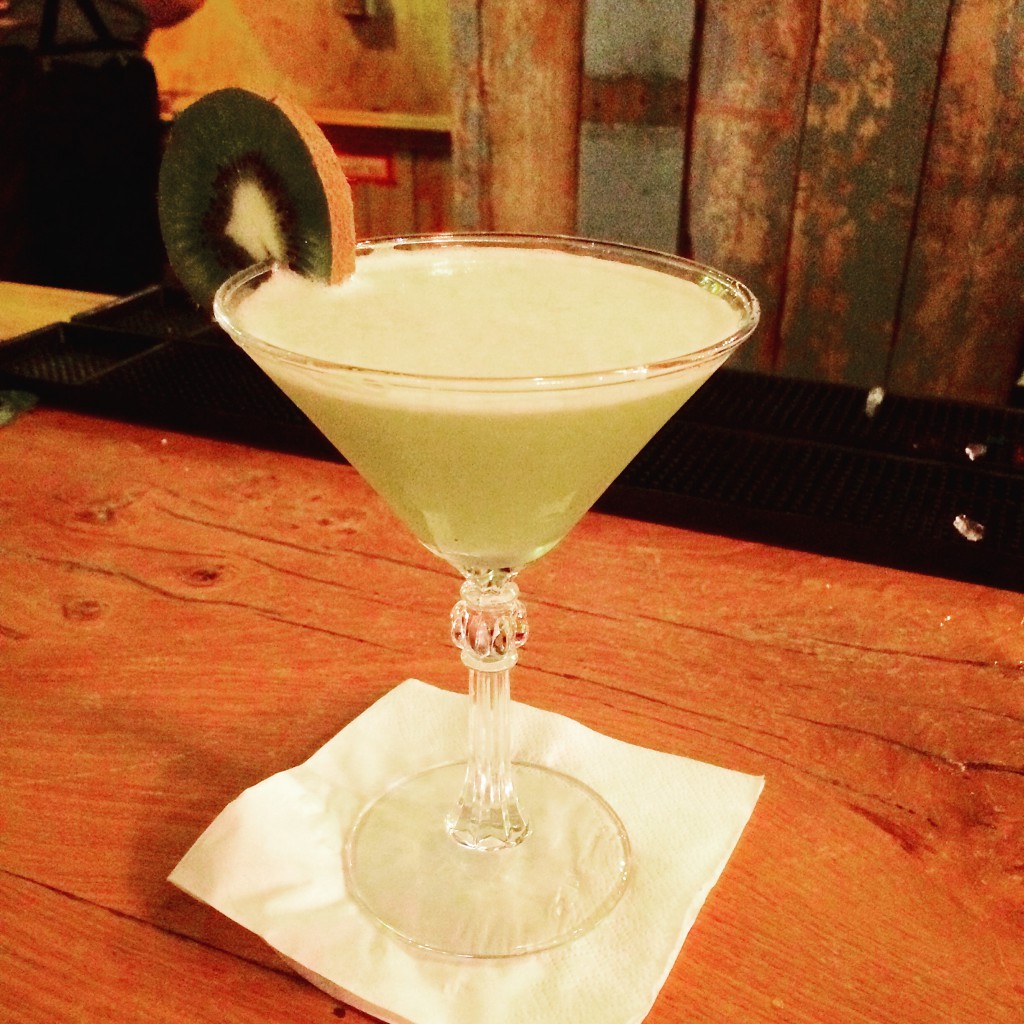 Our bartender for the evening, Elliott (a bit of a Rob Stark look-alike) then made us a Plum and Chilli Caipirinha which contains sagatiba pura cachaca, a Brazilian rum. You get a kick from the chilli but a bit of sweetness from the plum. 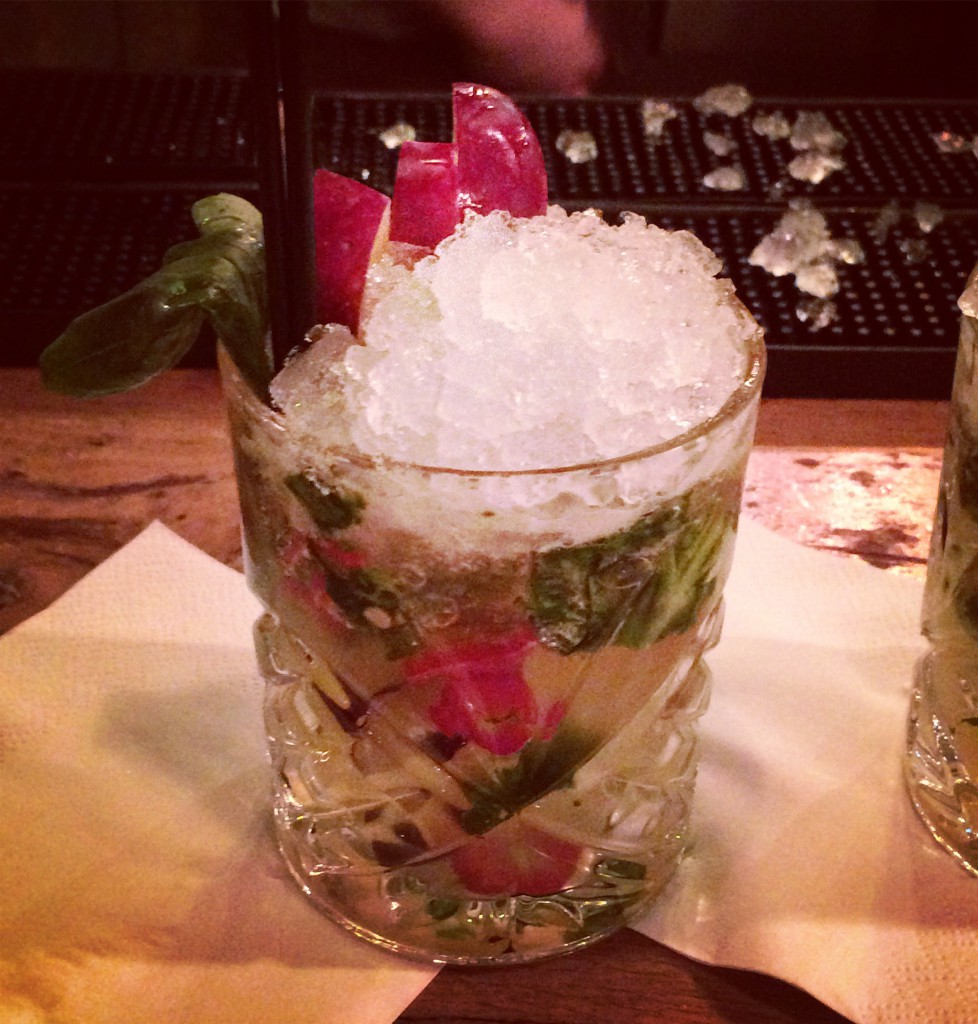 I got to go up and make a Thai Basil Crush next. I’ve never smelt Thai basil before – it’s really strong and smells like liquorice. This cocktail also uses chilli – Elliott explained to us that whenever a new ingredient is added to the menu, it has to be used in at least three cocktails to make it worthwhile – hence why you might see a few drinks with chilli in on the new menu. This is a gin based cocktail, and I’m not really a fan of gin, but this tasted lovely – very refreshing. 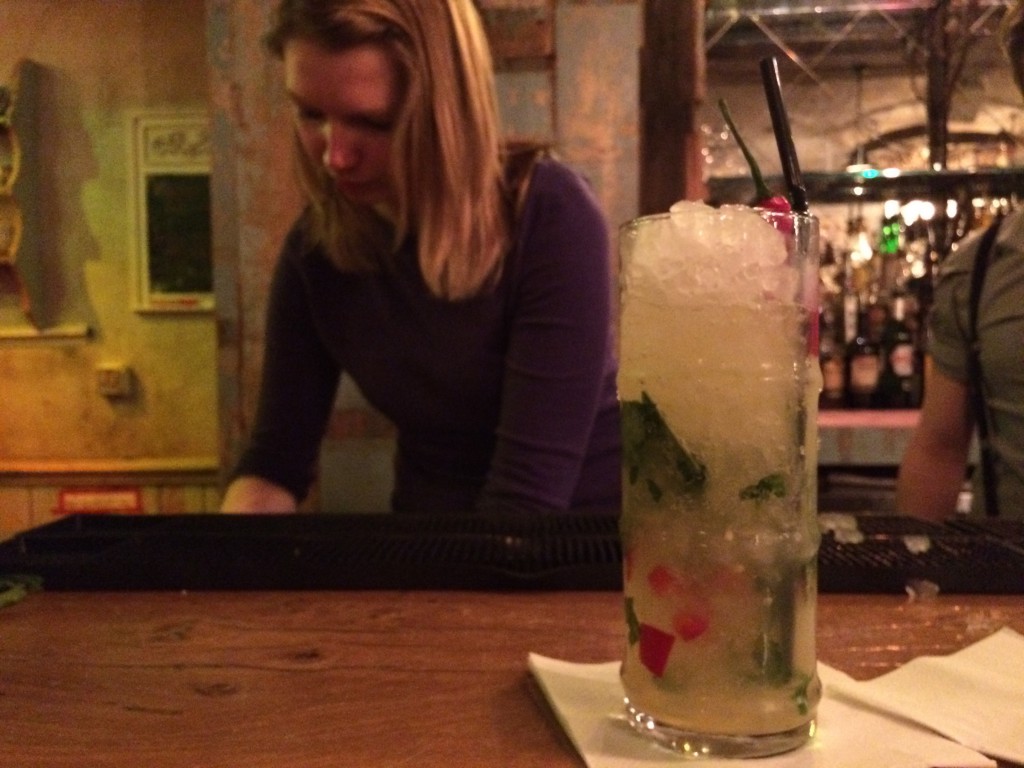 Me behind the bar making a Thai Basil Crush

We finished the evening off with The Botanist – a belvedere vodka and rum cocktail that won this year’s Cocktails in the City award for best cocktail. 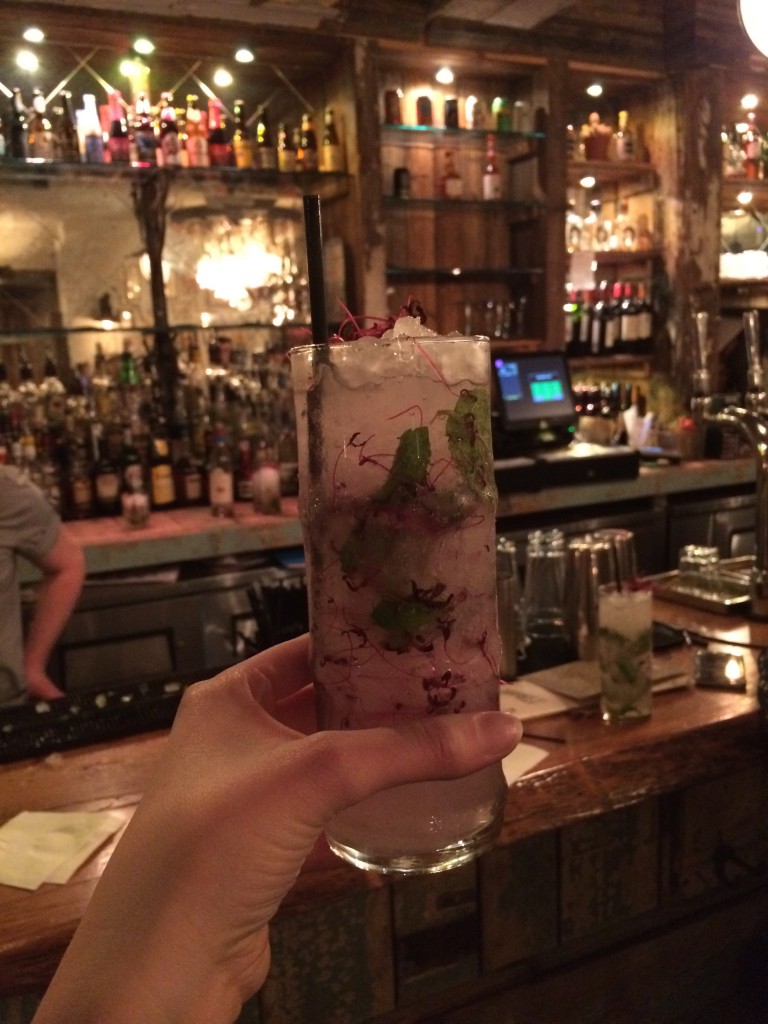 They were all delicious, but my favourite is definitely the Blackberry Mint Julep – I’ll be ordering one of those next time I visit!

One of the major changes with the new cocktail menu (which launches on Tuesday) is that the Botanist now uses fresh ingredients, as opposed to purees made with sweeteners. You can tell all the bar staff know their stuff – not having to look at menus to remember what’s in each cocktail and using counts rather than measures to pour the liquids.

The prices range from £6.95 to £9.95, so standard Leeds cocktail prices. You can get cheaper cocktails in Leeds, particularly on 2 for 1 deals, but they’re often not as nice and you tend to taste nothing but sugar in them. I don’t mind paying £8 for a cocktail when I know fresh ingredients are being used, they look as beautiful as they taste, and a bit of theatre’s gone in to the making of it (like at Smokestack and Blind Tyger as well.)

The Botanist also offers cocktail making classes for £25. We had a little insight into this and it was great fun. I knew that they offered food as well, but it’s never occurred to me before to go there for a meal. After trying a few nibbles on Thursday though and getting a smell of the dishes served in the restaurant area, I’ll definitely be back for food.

The Botanist is a great bar to sip some tasty and unusual cocktails. Being so close to the train station, it’s a good place to start or end your evening. The staff have always been friendly whenever I’ve been in, and I like a place that has a good atmosphere behind the bar as well as in the customer area (you’ll often hear shouts along the line for more ingredients from the bar staff.)

Thanks to Sophie at Golley Slater and the team at the Botanist for inviting me to try their new cocktail menu.