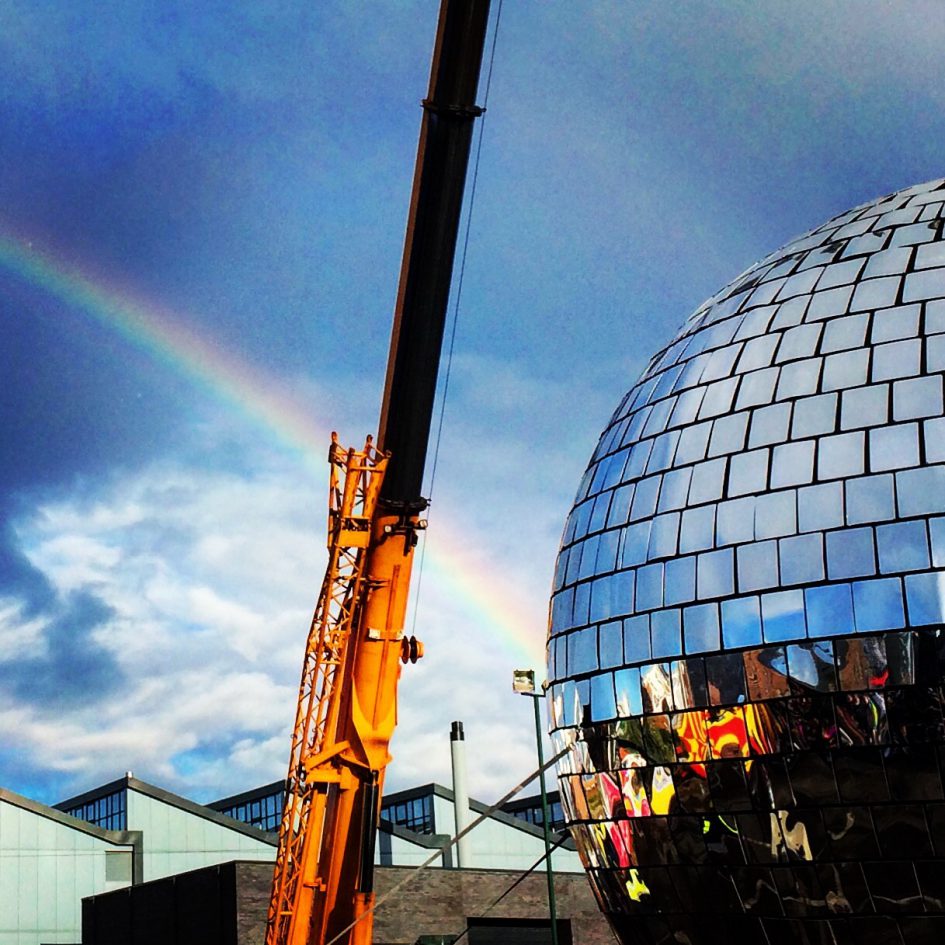 I spent Friday evening in a car park dancing next to a giant disco ball, and it was awesome.

As part of Yorkshire Festival, Duke Studios organised a massive disco in the car park by the Tetley, and encouraged people to host mini discos throughout Yorkshire.

I’d seen the Big Disco promoted for a while and thought it sounded like a fantastic idea. I’ve loved their cheeky advertising campaign and the fact that they’ve had a guy decked out in gold sequins go in to local schools and businesses to promote the event and get people dancing. 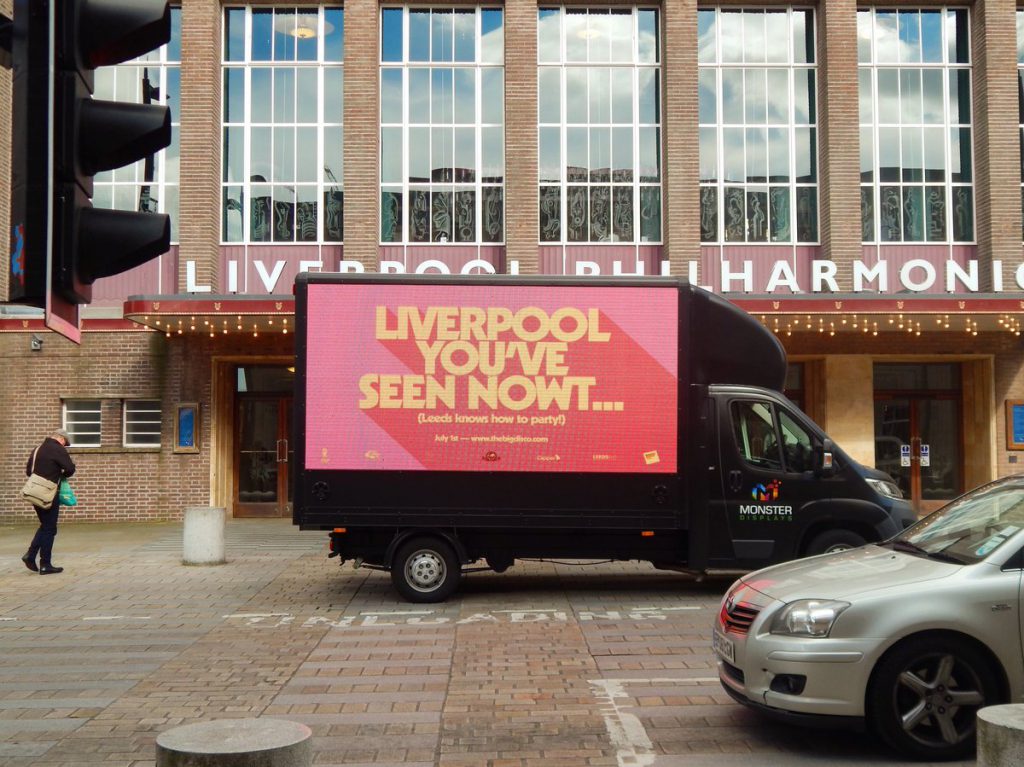 James and I went to the Big Disco straight after work on Friday and made a beeline for the street-food stalls. There was a dance-off stage, sponsor stalls, bar area and even a place to get your face decorated in glitter. The disco ball itself was cornered off near the main stage. Designed by Newsubstance, the ball was two and a half times the size of a double decker bus. Pretty impressive! 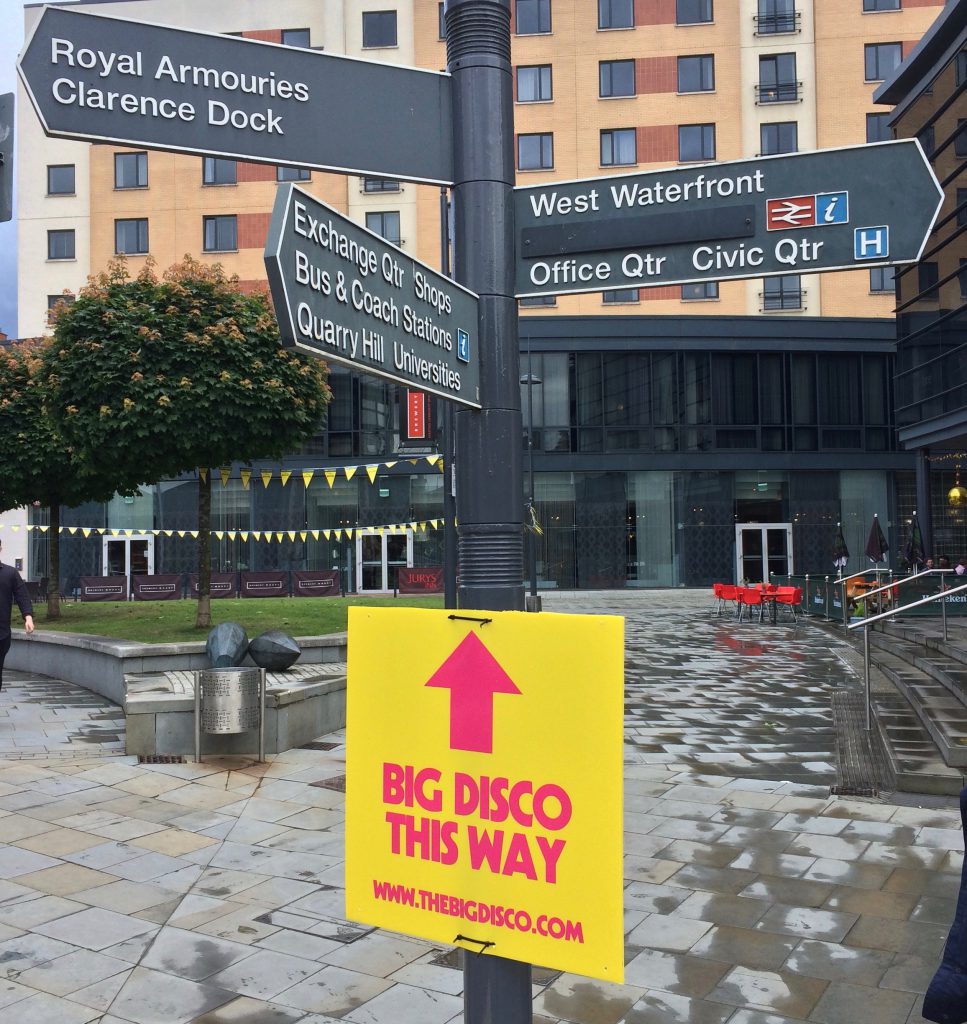 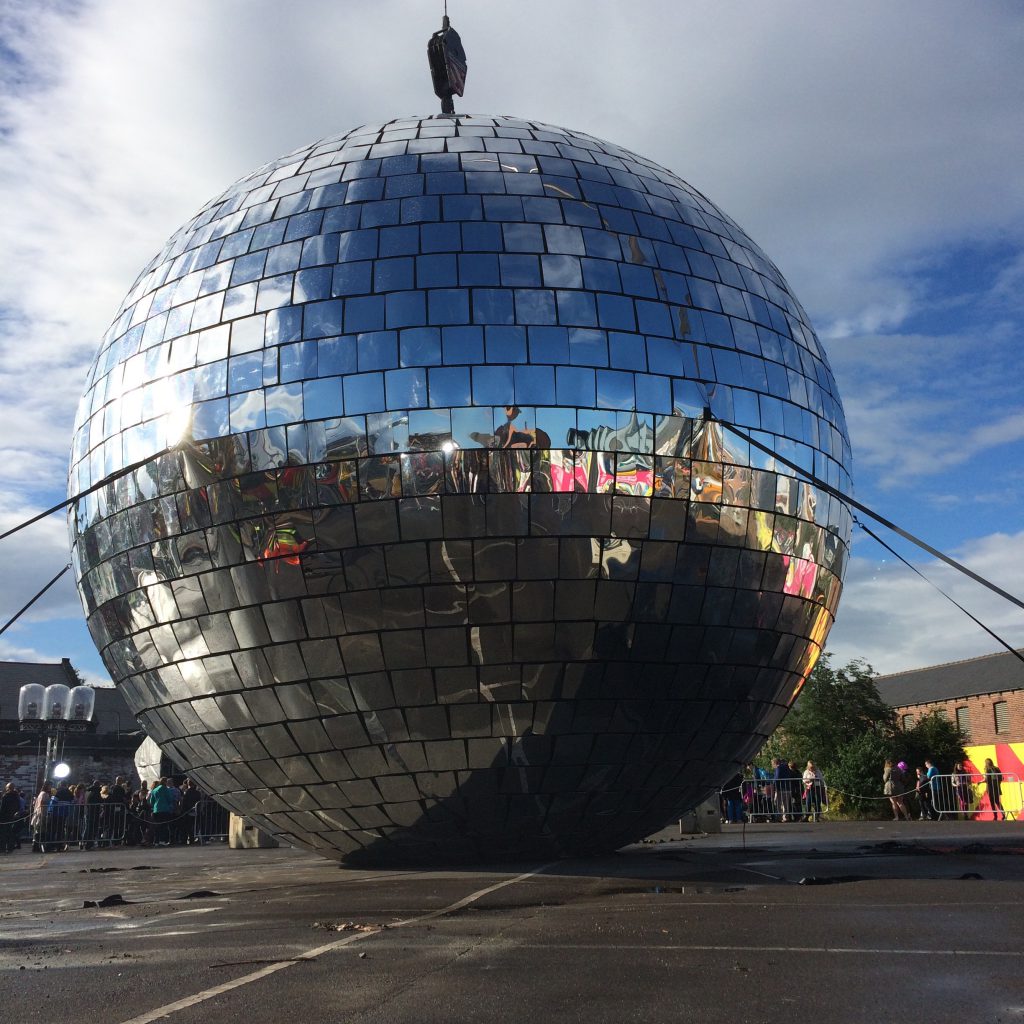 Unfortunately Craig Charles had had an accident so was unable to perform, which was a big shame, but DJ Yoda stepped in. We were dancing away to funky disco mixes before being joined by our friends Emma and Jake.

As part of the main event, we were told that a chosen song was going to play at 7.20pm. Those who were holding ‘little discos’ across Yorkshire would also play The Song at the same time, in an effort to get hundreds of people across the region all dancing to the same tune. You could vote online in the run up to the event, and although my preferred song (Daft Punk – Get Lucky) wasn’t chosen, I was pretty happy with the winning result – Donna Summers – I Feel Love – and from the reaction of the crowd, you could tell everyone else thought it was a worthy winner too.

It looked like the disco ball might not get lifted off the ground due to the wind, but as the track came to an end, the massive mirror ball was hoisted into the air.

Video of the disco ball being lifted into the air.

There were even people decked out in disco ball attire whose job it was to continuously walk around the mirror ball with ropes, making it spin round – it was the weirdest Maypole dance I’ve ever seen.

One of the things I loved most about the evening was that no one just walked any where; instead they ‘grooved’ from one place to another. There was lots of shoulder bopping and hip swaying as people moved around.

The atmosphere was great all evening. There were plenty of kids around, and some people had gone to amazing effort to get decked up in disco glam. I was annoyed at myself for not wearing any sequins or glitter! As well as the DJ sets, there were also dancers on stage and then a carnival parade underneath the disco ball which was great fun to watch. 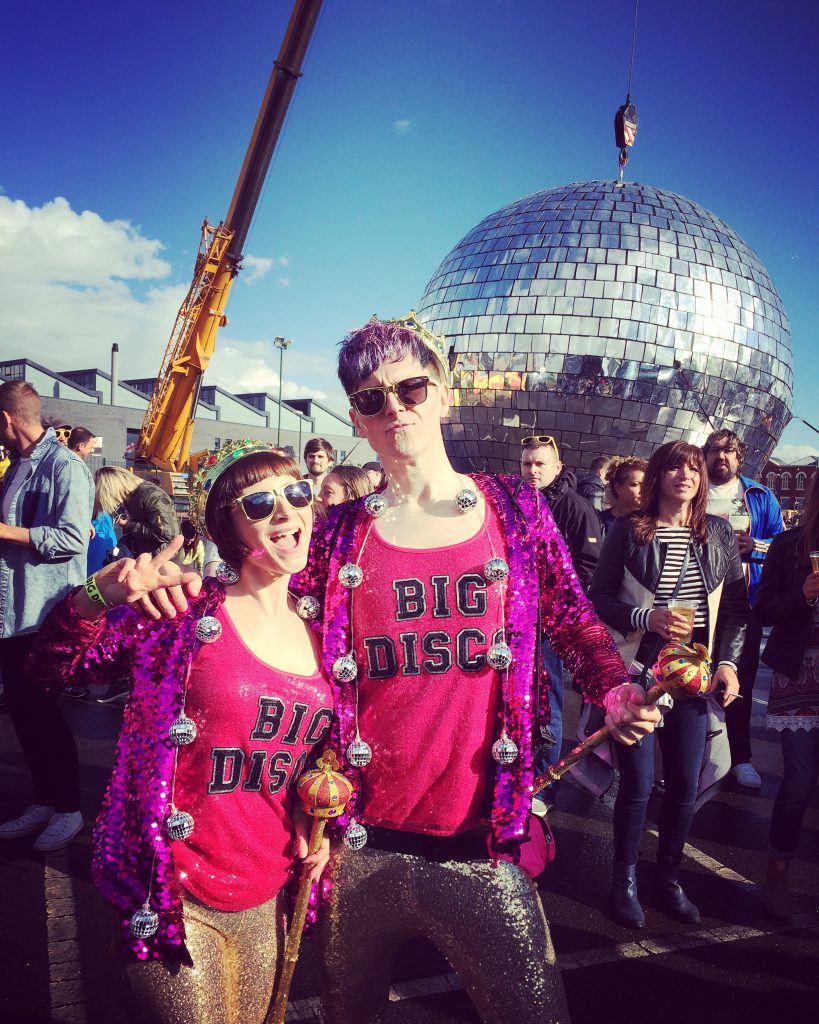 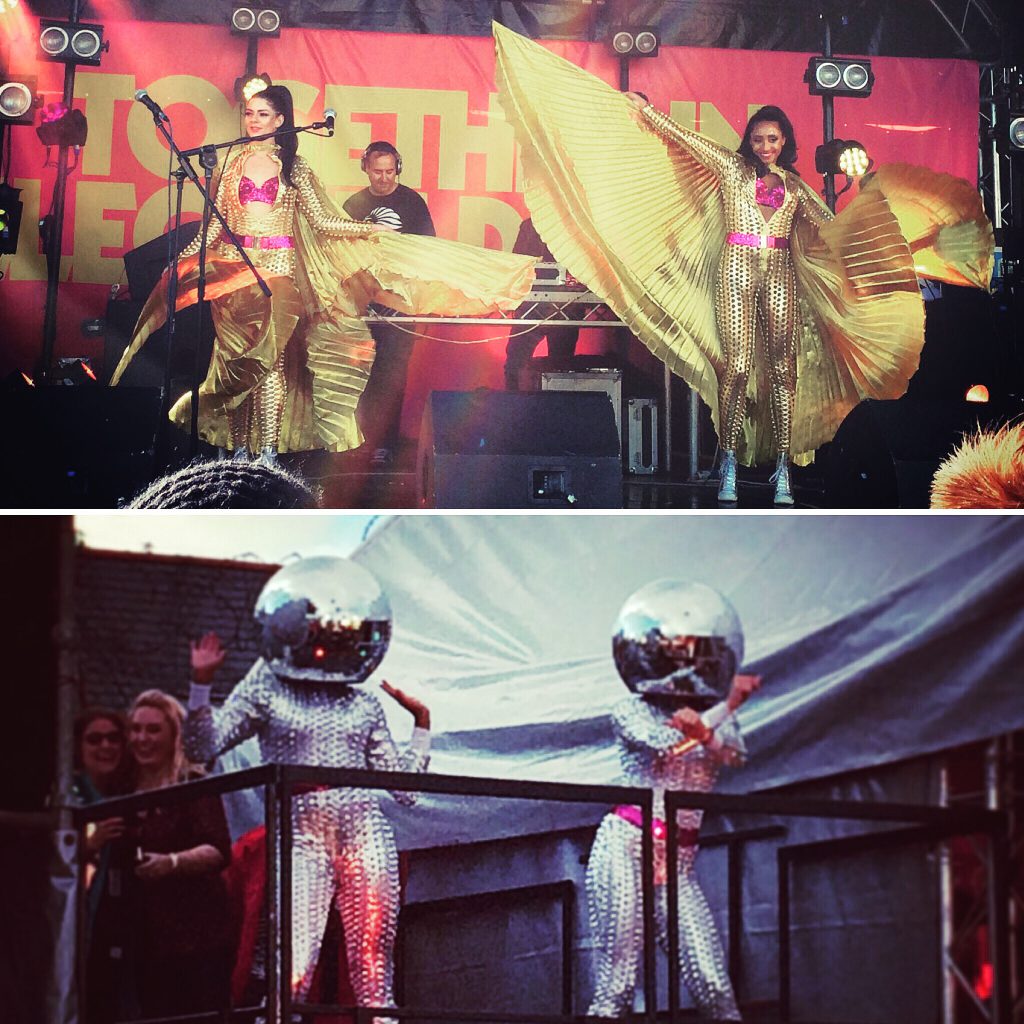 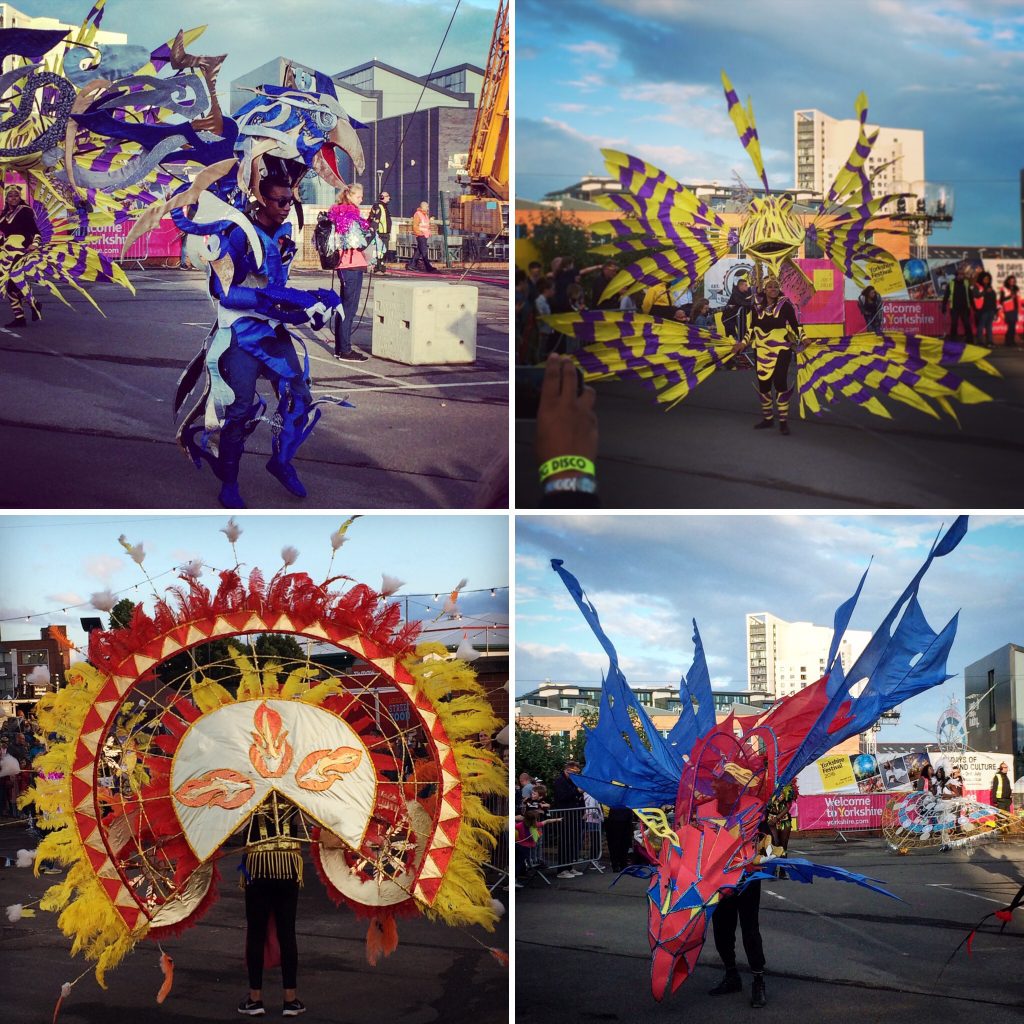 We had all sorts of weather throughout the evening – it chucked it down for five minutes, and then we had glorious sunshine, before the clouds came back, and then the sun came out for a bit… It just shows that a bit of rain isn’t enough to put Yorkshire folk off having a good time. We’ve come to accept that summer doesn’t necessarily mean sunshine, so are prepared to dance in our platform, sequinned shoes in the downpour! At least we got a lovely rainbow out of it. 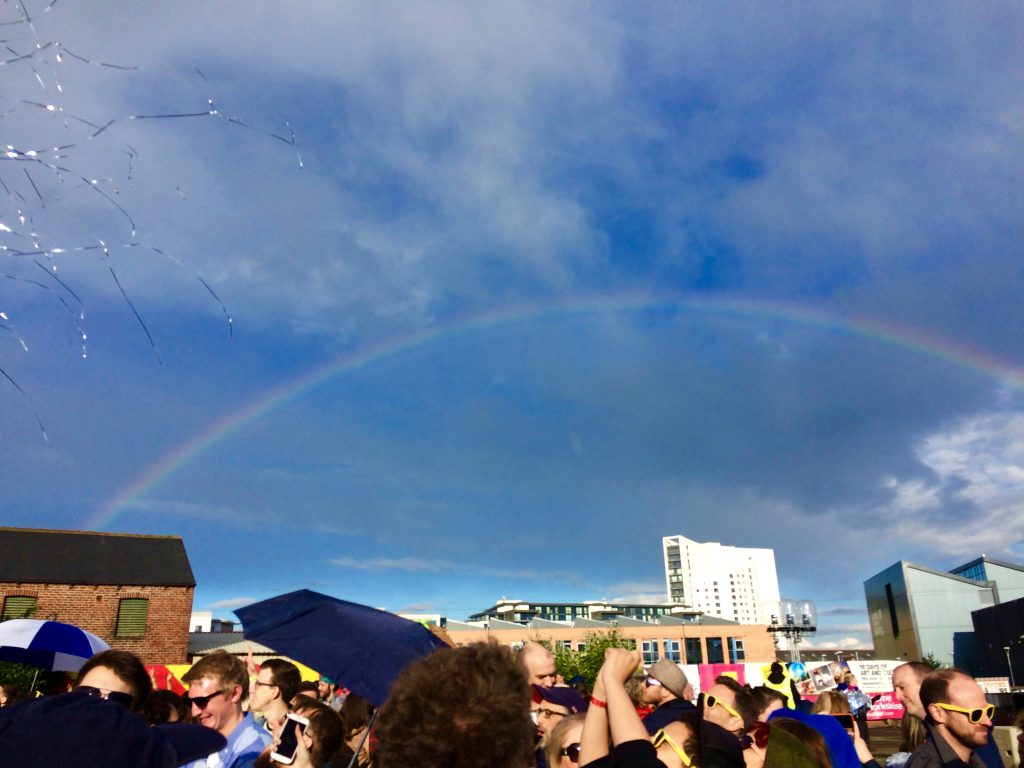 James and I went home at 9pm but from some of the comments I’ve read online, it sounds like the party lasted a long time!

The Big Disco is an excellent example of why I love Leeds. A group of people worked together to put on a creative event that was suitable for all ages, bringing a community together to celebrate and have a good time, dancing in a car park. Loved it. 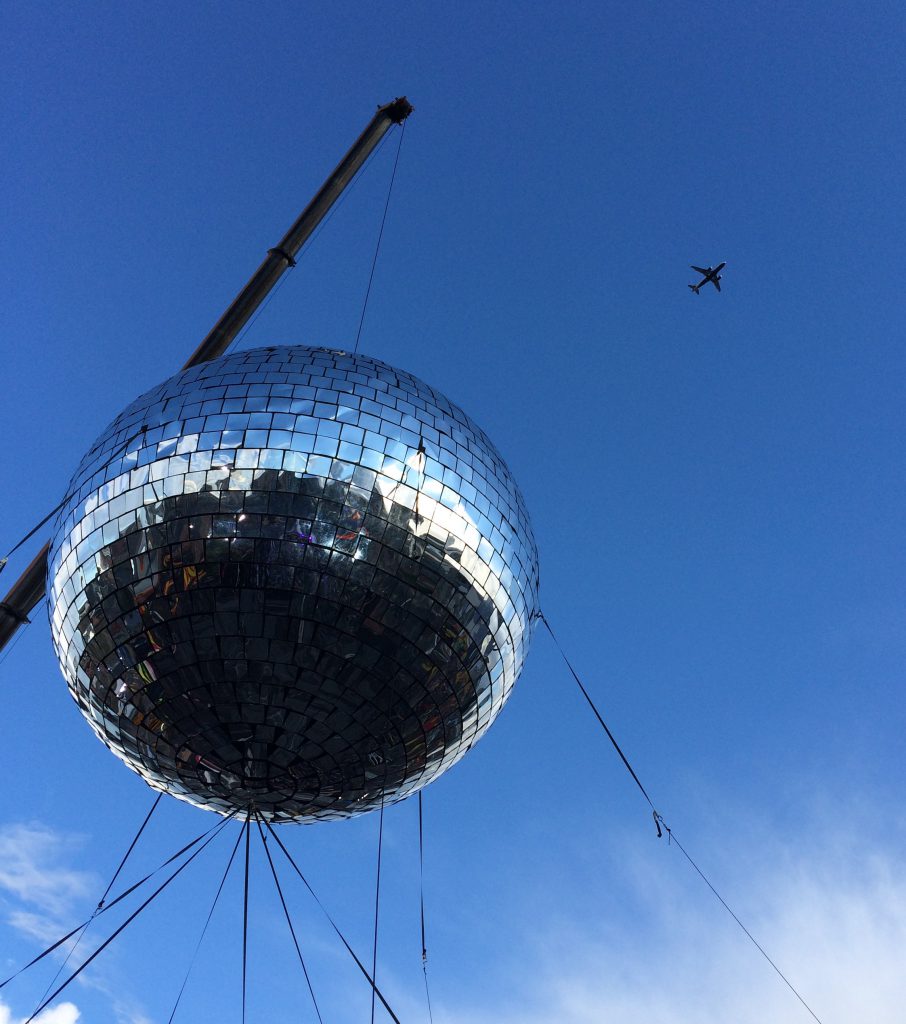