Pizza and pool with dad 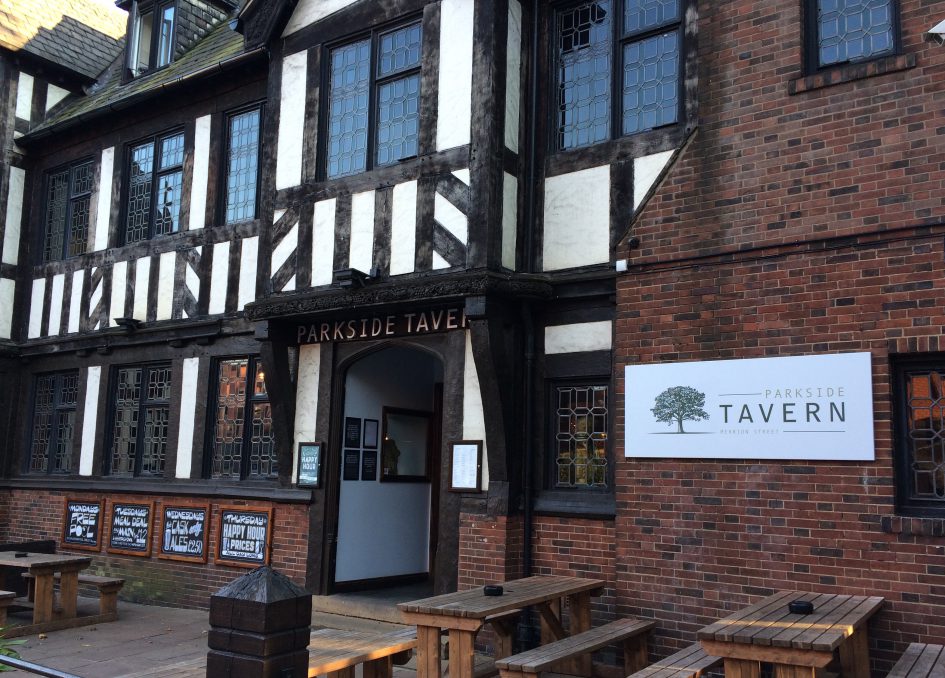 Whenever my mum goes away on holiday, I use it as an excuse to go out for tea with my dad.

They tend to be evenings of over-eating and drinking. We went to Smoke BBQ last time, and Reds before that. This time, whilst mum was sunning it up in the south of France earlier this week, dad and I decided to have a few games of pool (that counts as exercise right?) as well as eating.

We always meet at The Brewery Tap first. This is also where Dad goes for a drink “with the lads” before visiting the nearest curry house. It’s half a minute’s walk from the train station if you turn right by M&S, just next to Laynes (which serves the most amazing chocolate and banana cake.) 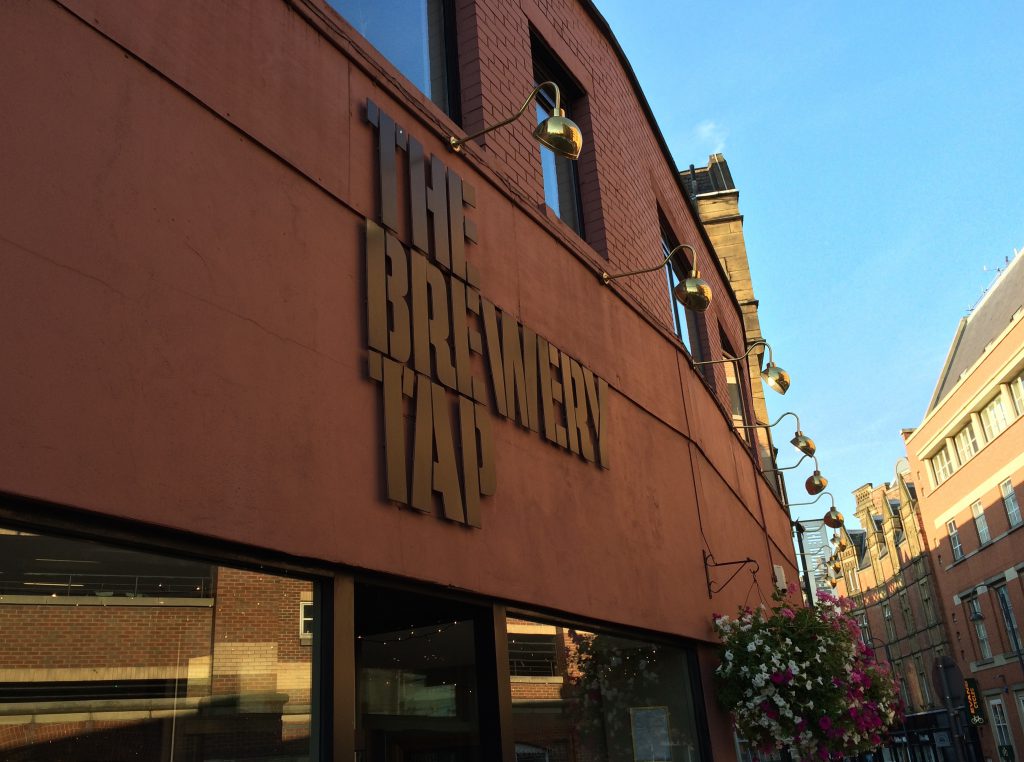 I asked dad why he liked The Brewery Tap, and these were his reasons: 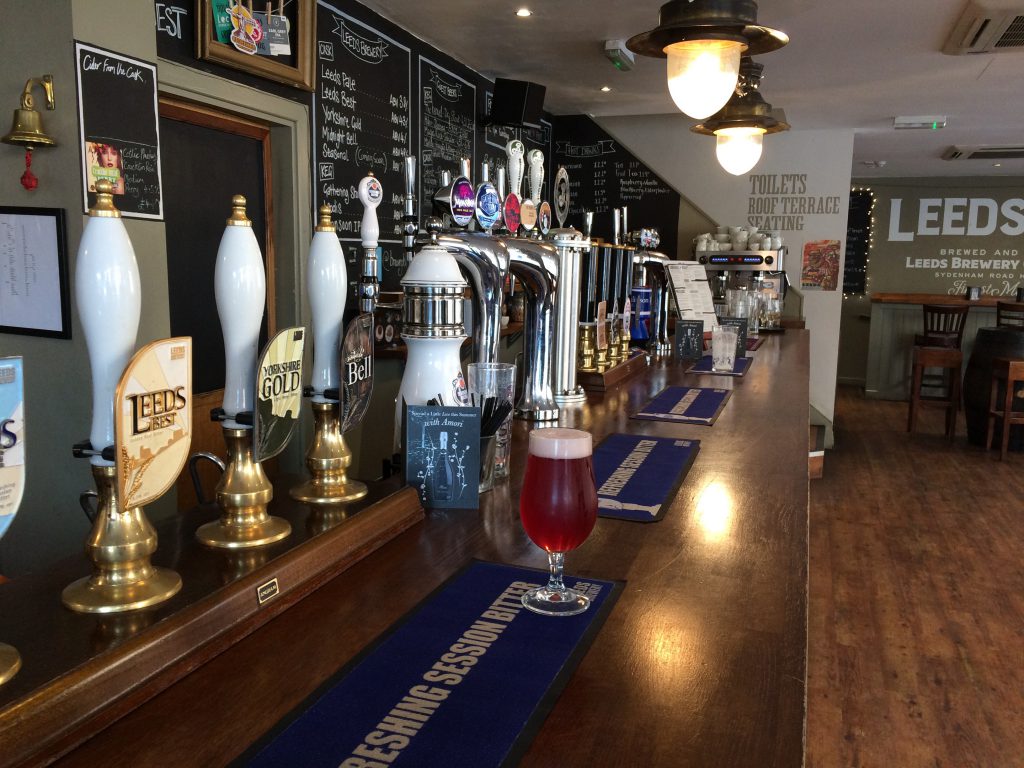 The Brewery Tap also does food, but I’ve never eaten there. (Let me know if you have and think it’s any good.)

We then made our way up to Parkside Tavern on Merrion Street which, until very recently, used to be called Slate NQ.

The first time I went to Slate NQ was at the launch party last summer on a Thursday evening. It should have been a pleasant, quiet evening of complimentary drinks and pizza, but seeing as I was out with Kirsty (who is definitely a bad influence) it ended up being a very late night, with many more bars visited after Slate, and us finally getting in at around 2am. It felt fun at the time, but not so much when we had to get up for work just a few hours later…

Luckily I’ve had a few more ‘restrained’ nights at Slate NQ/Parkside Tavern since then. One of the reasons I suggested it to my dad was that there are four pool tables there, so it’s a good bar choice if you want to do something other than drink. In the spirit of giving an honest review, I should probably include here that James was the pool champion of the evening, beating both dad and me (although it was close!). 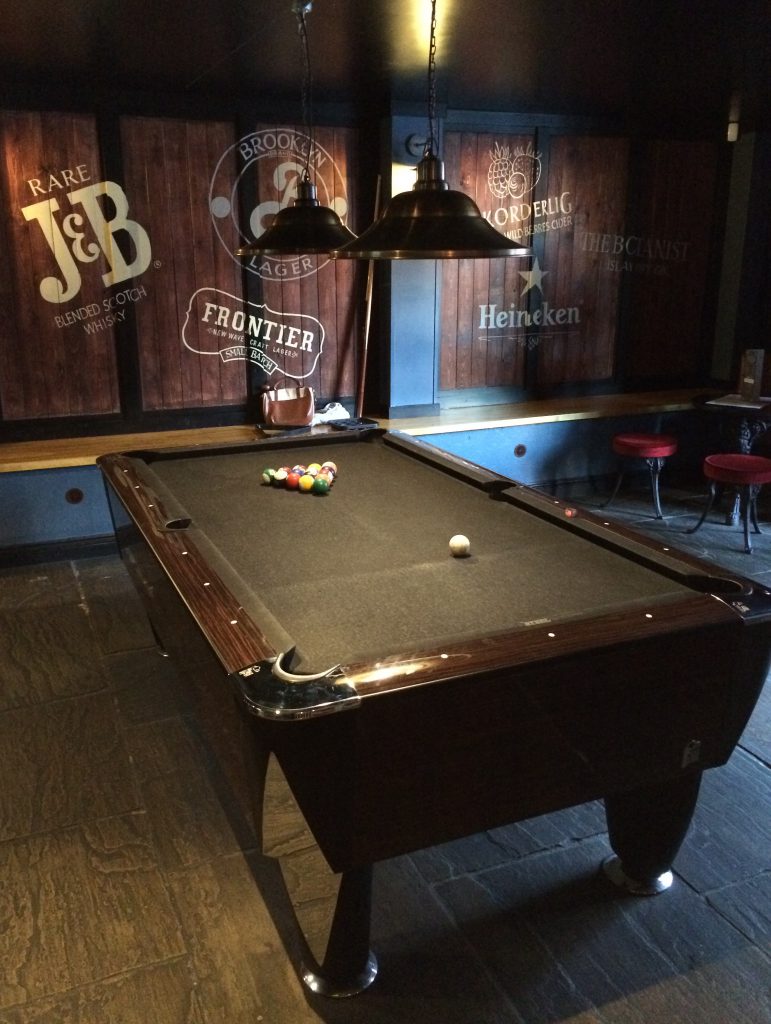 If you want a game of pool, it’s £4 for half an hour during off-peak times and £5 during peak times (and free on Mondays!) You need to leave your card behind the bar and I’d suggest setting an alarm on your phone so you don’t get carried away and not realise that three hours have passed when you thought it had only been 45 minutes.

There are also various deals on food and drink such as happy hour all evening on Thursdays.

I like Parkside Tavern for many reasons other than the pool tables – it’s nice and spacious, there are plenty of outdoor areas, and the staff are nice. My main reason for liking it however is because of the music they play. It’s mainly 90s and 00s indie rock/punk pop rock (or has been whenever I’ve gone at least) so it feels like they’ve got one of my playlists on. Blink 182, Jimmy Eat World, The Black Keys, Oasis… with a few AC/DC songs thrown in for good measure. 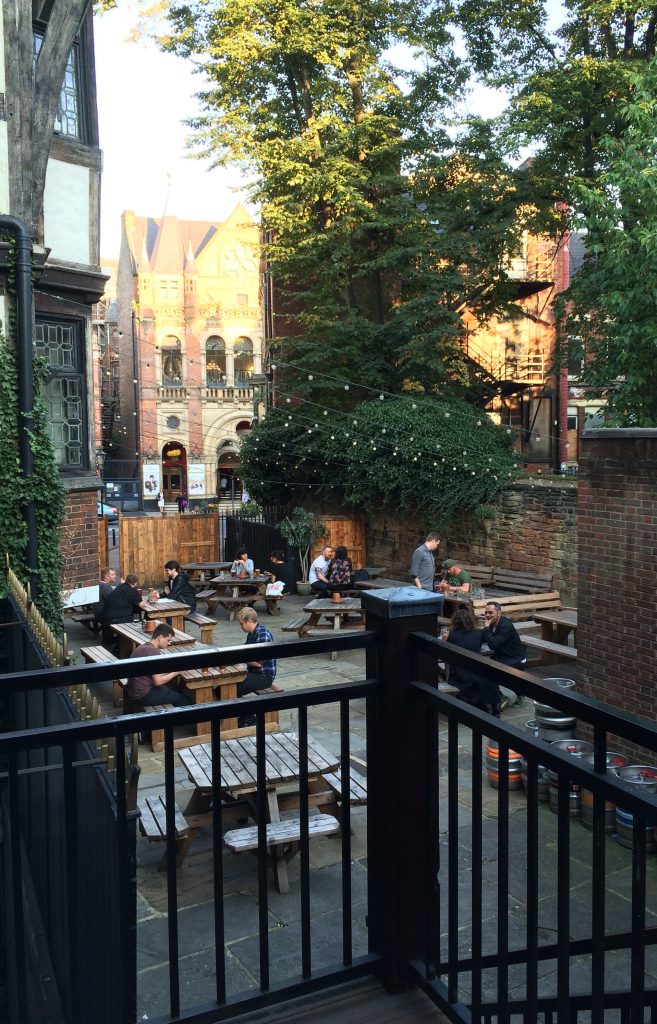 Last time a group of us were there, we ordered some pizza to have whilst we were playing, but this time we actually sat down at one of the tables to eat. There are other things to choose from on the menu, such as burgers and flatbreads, but I had it in my mind that we had to have pizza (I don’t know why – maybe because “pizza and pool” just sounds better.)

In typical Preston/Jones style, we chose the three meatiest options available: cheese steak, shredded pork and meat feast. I’d like to tell you that the shredded pork tasted really good, but dad wouldn’t share. He ate it all, so I assume that’s a good sign! 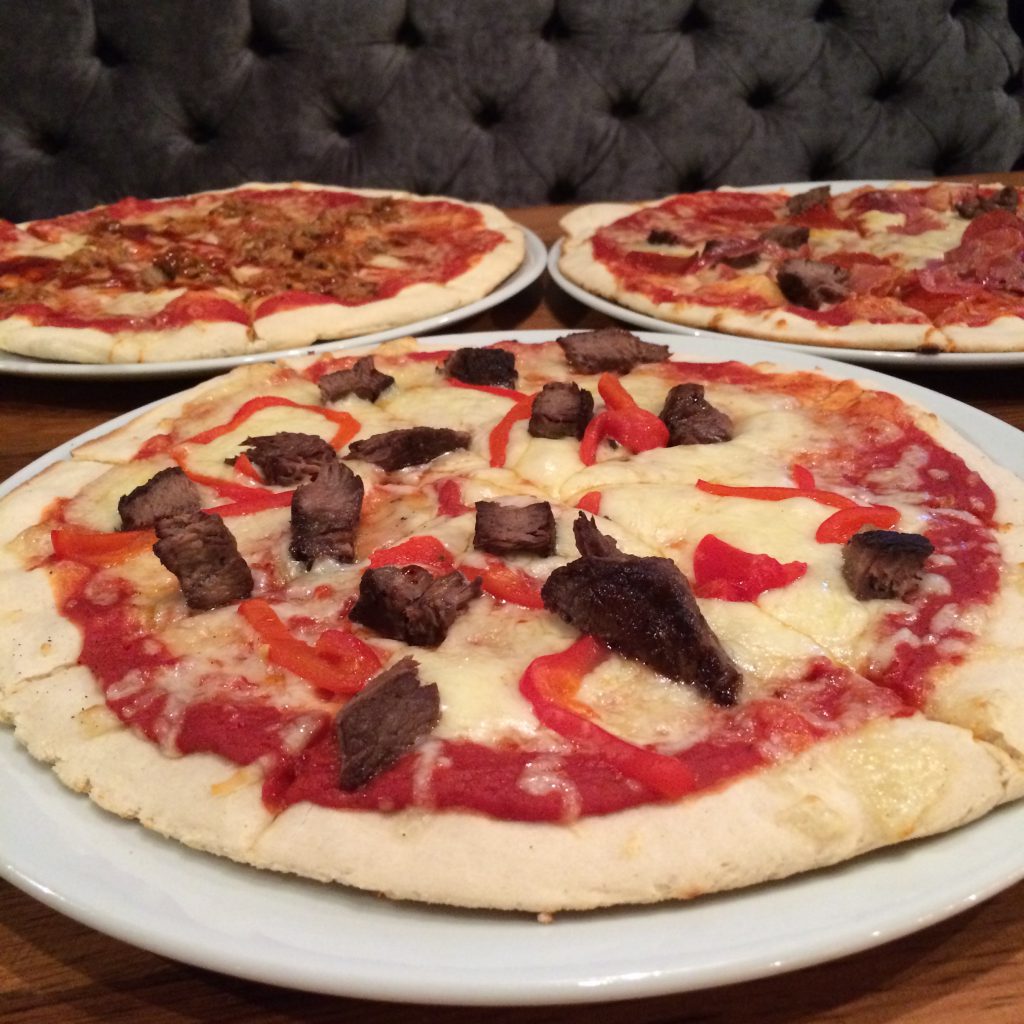 We were full from the pizzas, but dad and I thought we best order pudding too – just so we could give a proper report of the food. We were only thinking of you dear readers! Dad had the cookies and cream ice-cream and I went for the Belgian chocolate waffle – both were incredibly sickly and delicious. 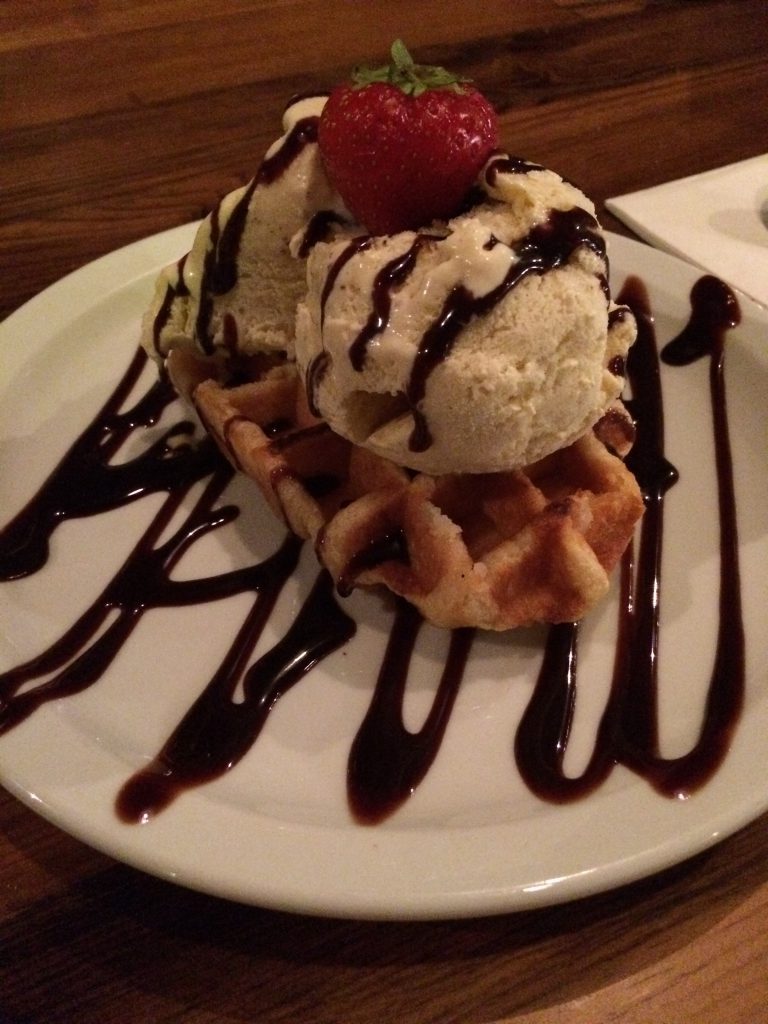 The good thing about being at that end of town is that the walk back to the train station was on a slight decline so luckily it wasn’t too much effort to catch our trains after eating all that food!