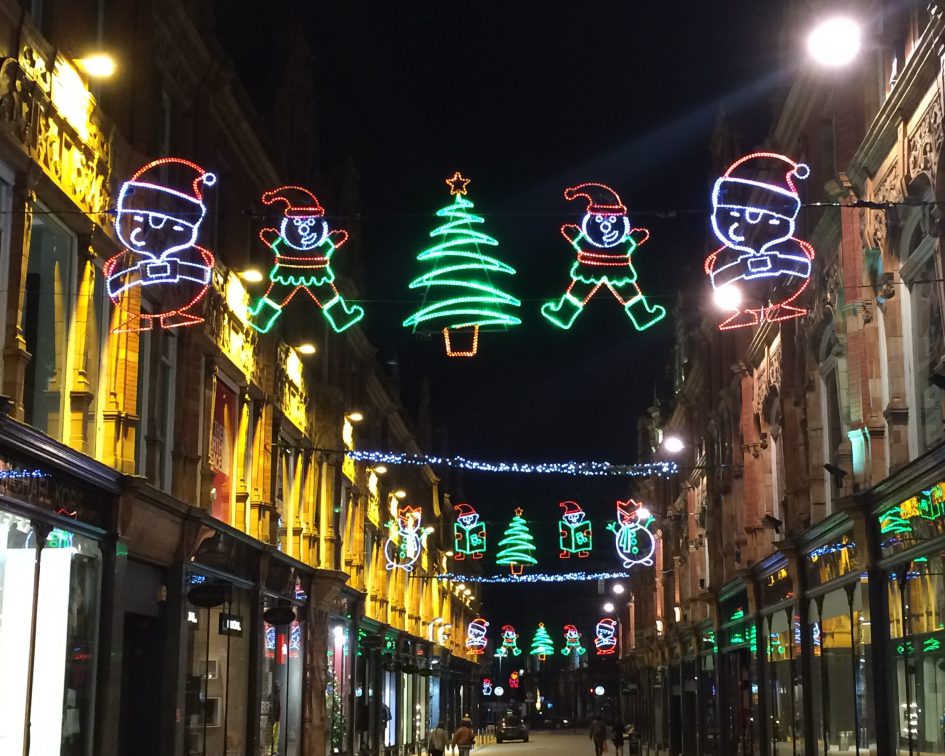 Okay, so I know it’s only just October, but there are so many ace things to do in Leeds over Christmas, and for a lot of them you need to book tickets in advance, so I wanted to give you plenty of notice. There’s actually so much I’d recommend, that I’ve split this blog into two – so here’s part one.

Over the last couple of years I have mastered the art of fitting as many festive activities into December as possible. I’ll be blogging about some of them in a bit more detail over the coming months, but for now, here’s a list to get you started:

For the last two years, mum and I have gone to the City Varieties to see their famous Rock’n’Roll pantos. Last year was Robin Hood and the Babes in the Wood and the year before that we saw Dick Whitington.

The City Varieties is a lovely venue – a proper traditional theatre – and the Christmas shows are absolutely brilliant. The cast don’t only act, but they also sing, dance and are in the live band on stage. Each time we’ve been we’ve been amazed at the talent of all the performers.

The panto is perfect for children, but there’s plenty of subtle (and not quite so subtle!) adult humour as well. If you’re a fan of pantomimes, there’s all the traditional audience participation (“oh no there’s not!”) and innuendo (particularly in Dick Whittington…) from the panto dame. Even if you’re not a fan of the traditional panto (which neither my mum or I am really) there’s still so much to enjoy. There are loads of feel good songs throughout the show – proper classics that make you want to get out of your seat and have a dance.

I really recommend this if you’re looking for something light-hearted, funny and love live music.

Sleeping Beauty is on from Sunday 27 November to Sunday 8 January.

The Witches at the West Yorkshire Playhouse

Every year the West Yorkshire Playhouse puts on a fantastic, family-friendly performance. Last year was James and the Giant Peach and it was fabulous. It’s amazing what a small cast and some very creative set designers and prop makers can do. I went with a group of grown-ups and we enjoyed it as much as the kids there. I also saw Wind in the Willows, probably almost a decade ago, and it was an absolutely amazing production.

This year, the Playhouse will be putting on The Witches which I’m incredibly excited about. There are so many bits I’m not sure how they’ll do, but I remember thinking the same about James and the Giant Peach. I just hope it’s not as scary as the book and the film!

(For those with younger children, there’s also always a show aimed at under 10s on every year. This year they’re doing Rudolph.)

The Witches is on from Friday 2 December to Saturday 21 January.

As well as shows for the kids, the West Yorkshire Playhouse also has a big musical on every year over Christmas. Last year was Irving Berlin’s White Christmas. There are so many songs in that musical that I’d heard of but never knew that’s where they were from! It was a brilliant production, but I think I would have enjoyed it even more if we’d seen it closer to Christmas. As the tickets get more expensive around Christmas time, Chloe and I saw it in the last weekend of November and it felt a bit odd to watch something so Christmassy when you weren’t quite in the Christmas mood.

This year they’re doing Strictly Ballroom The Musical which is excellent timing as I saw the film for the first time in years only a few months ago. There are some great songs in this so I’m hoping for some good things! As it’s not Christmas themed, I might wait until the New Year to see it so I have something to look forward to in January.

Strictly Ballroom is on From Wednesday 30 November to Saturday 21 January.

Live music
Town Hall: There are plenty of festive concerts at the Town Hall. If you can take an hour on your lunch break, there’s a brass band Christmas concert on Tuesday 13 December which will be a carol sing-along. Best of all, it’s free to attend! Brass bands sound great any time of the year (maybe I just think that because I’m from Yorkshire?) but they sound particularly wonderful in winter, playing Christmas songs.
Arena: Although not Christmas themed, there are some great gigs on at the First Direct arena if you want some December treats. I’ve got tickets to see Placebo and Biffy Clyro with Brand New, so I’m pretty excited about that!
Other gig venues: There are plenty of other great gigs on in December as well at other venues in Leeds. I’ve already got tickets to see Larkin Poe at The Wardrobe and might go see Lissie at Brudenell Social Club – both lovely venues for intimate gigs. There’s also the 02 Academy, Leeds College of Music and plenty of local bars with regular gigs such as Oporto and Sela Bar.

Look out for part two of this blog for some more Christmas activity suggestions!