Drinks with a view 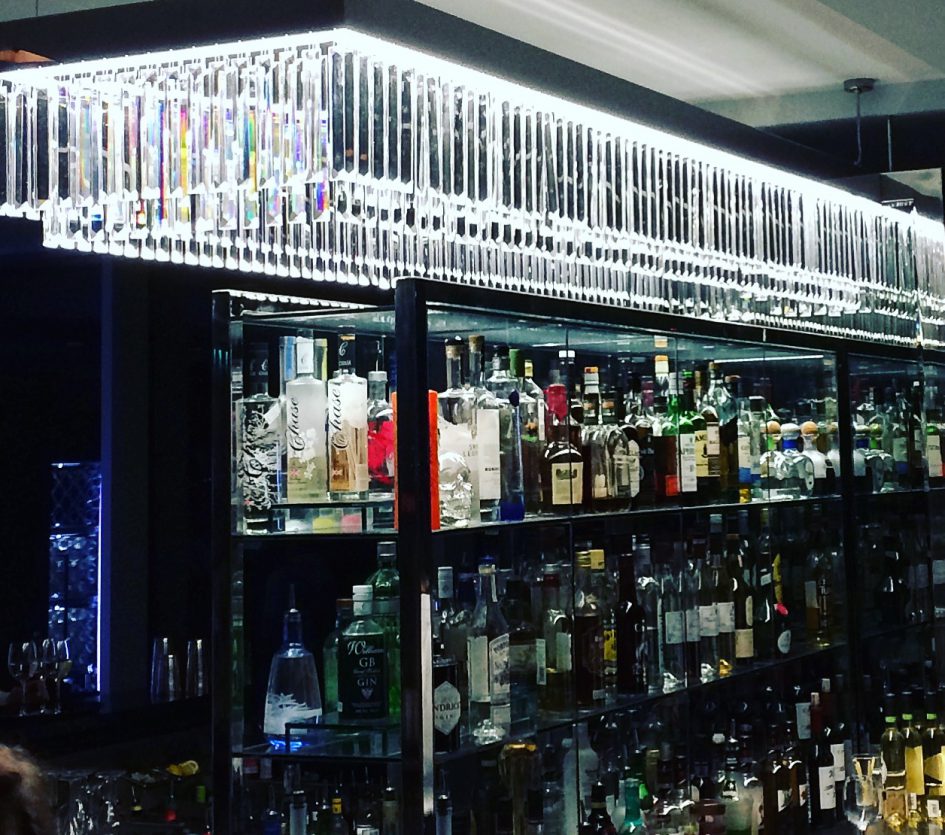 I have two reasons for creating and maintaining the Loving Leeds Blog. The first is that I love writing. The second, and perhaps more important reason, is that I genuinely think Leeds is an amazing city. There is so much to do and there really is something for everyone. I always have friends asking me where to go or what to do, so I thought I might as well put all my recommendations down in one place.

My blog is a labour of love. However, sometimes I get invited to fantastic events as a result of the blog, and that makes the hours spent writing and editing posts and sorting through photos very worthwhile.

This happened to me last week. I received an invitation to the relaunch of the Sky Lounge in the DoubleTree by Hilton Hotel. I’ve only been to Sky Lounge a few times, but I love it. I mentioned it recently in my blog post on the best bars to go for cocktails in Leeds and it made me want to go back. I attempted to take Mum there last month, but when we got to the very top and the doors of the lift opened, the whole floor was blocked off. I hadn’t realised it was closed for refurbishment (and managed to miss all the signs stating that fact on the ground floor!)

That’s why I was particularly excited to be invited to the bar’s relaunch.

Sky Lounge is in the Hilton Hotel on Granary Wharf and is managed by Valor Hospitality Europe. It’s on the very top floor and is actually the highest rooftop bar in Leeds. The bar and lounge area is very stylish and classy. (I like the giant crystal/mirror balls hanging from the ceiling!) 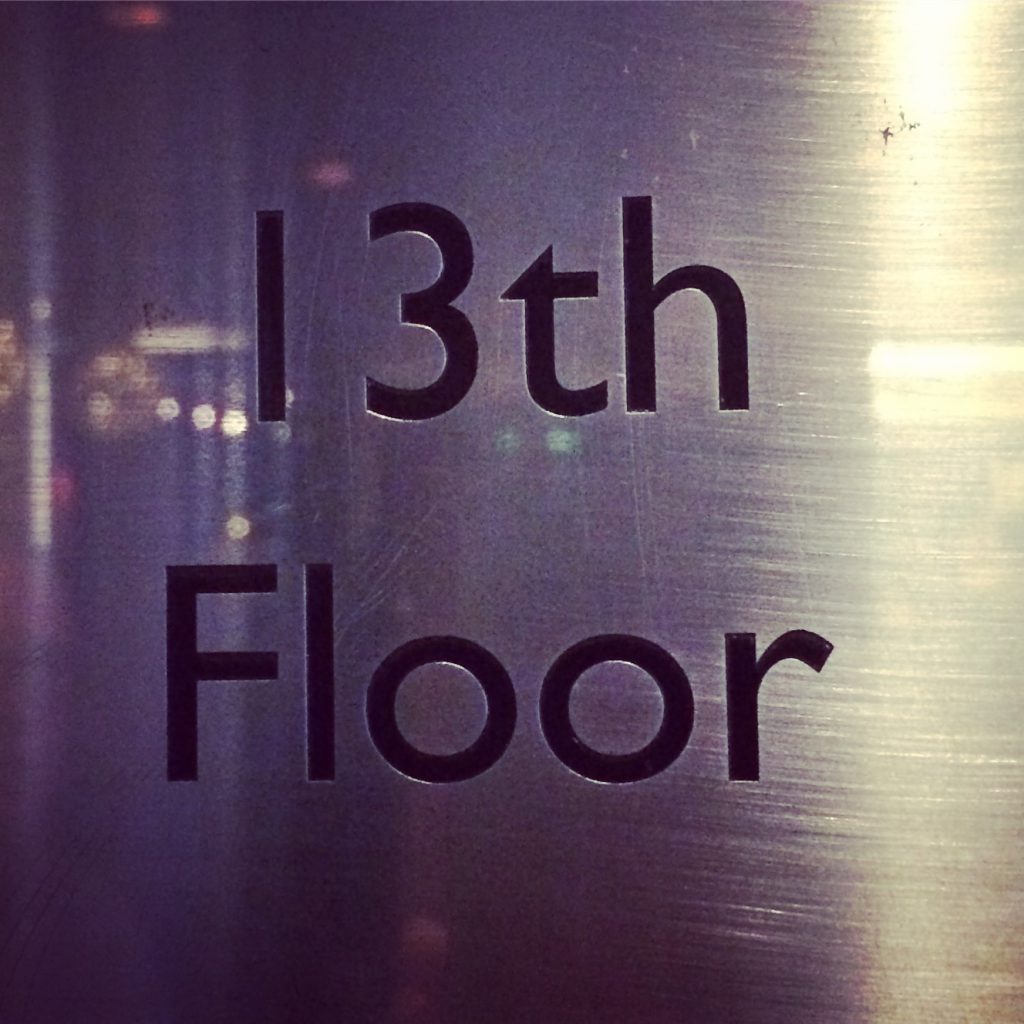 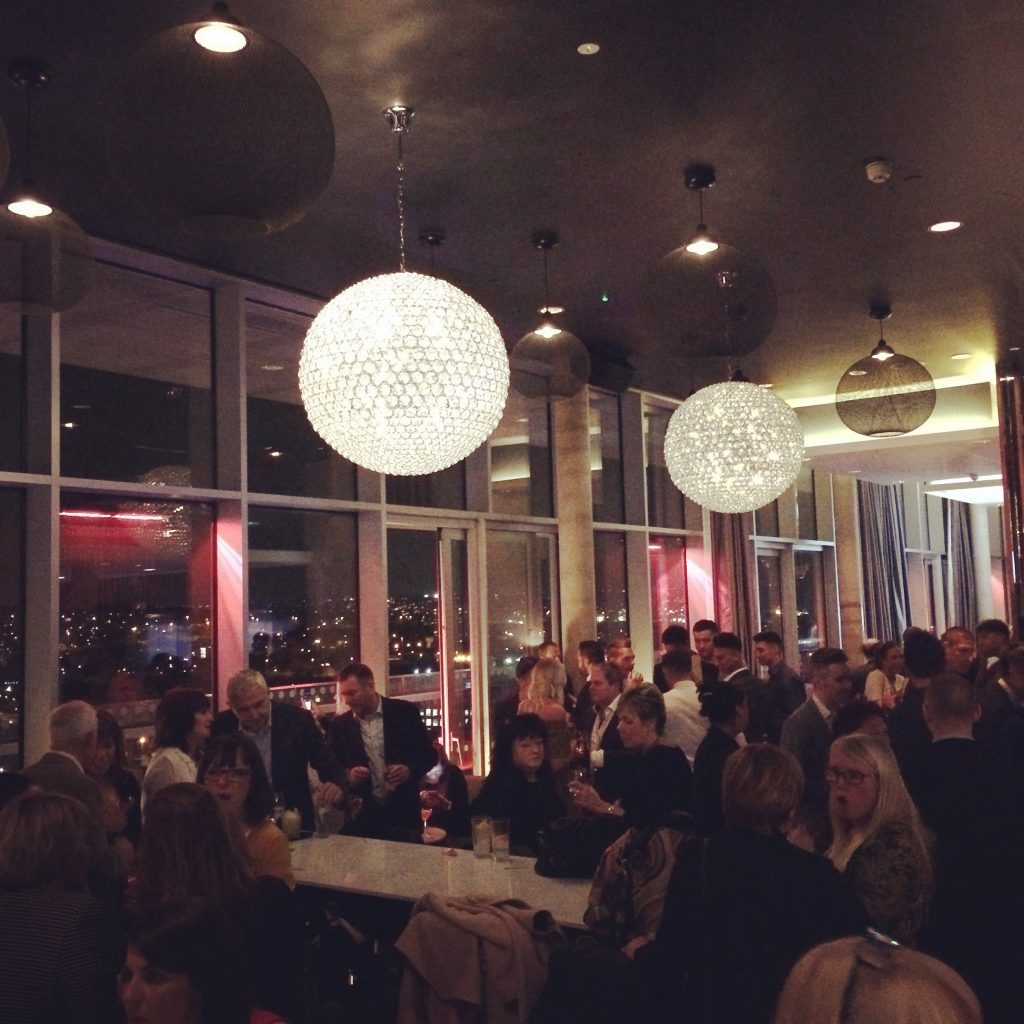 The bar is in the middle of the room and there’s plenty of seating and standing area. As opulent as the decor is inside, it’s outside that makes Sky Lounge special, with its impressive views of the city. Remembering that we are in Britain and it’s cold for 49 weeks of the year, you’ll be reassured to know there are heaters outside! 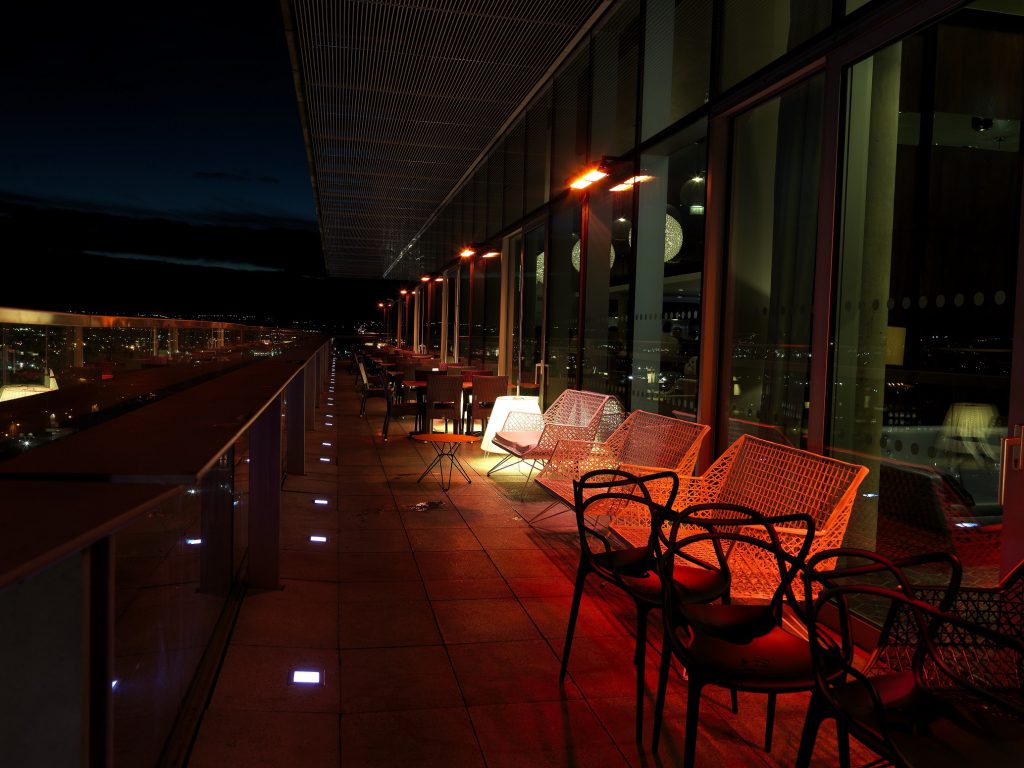 We’d been told that one of the aims of the relaunch night was for the bar staff to show off their cocktail making skills. Rather than having menus out, people were requesting whatever drink they fancied. Most were asking for standard drinks like martinis or daiquiris, but I didn’t have anything specific in mind so just asked for a drink that tasted like a pudding. (You may have gathered from my previous blog posts that I have a bit of a sweet tooth!)

The bartender thought about it for a couple of seconds and then made me a delicious cocktail that tasted like toffee apple. We also had raspberry mojitos and I had a cocktail with rum and ginger beer (it was different to the usual Dark and Stormy.) There were also trays of wine and prossecco going round, so we sampled them too. (All in the name of research of course!) 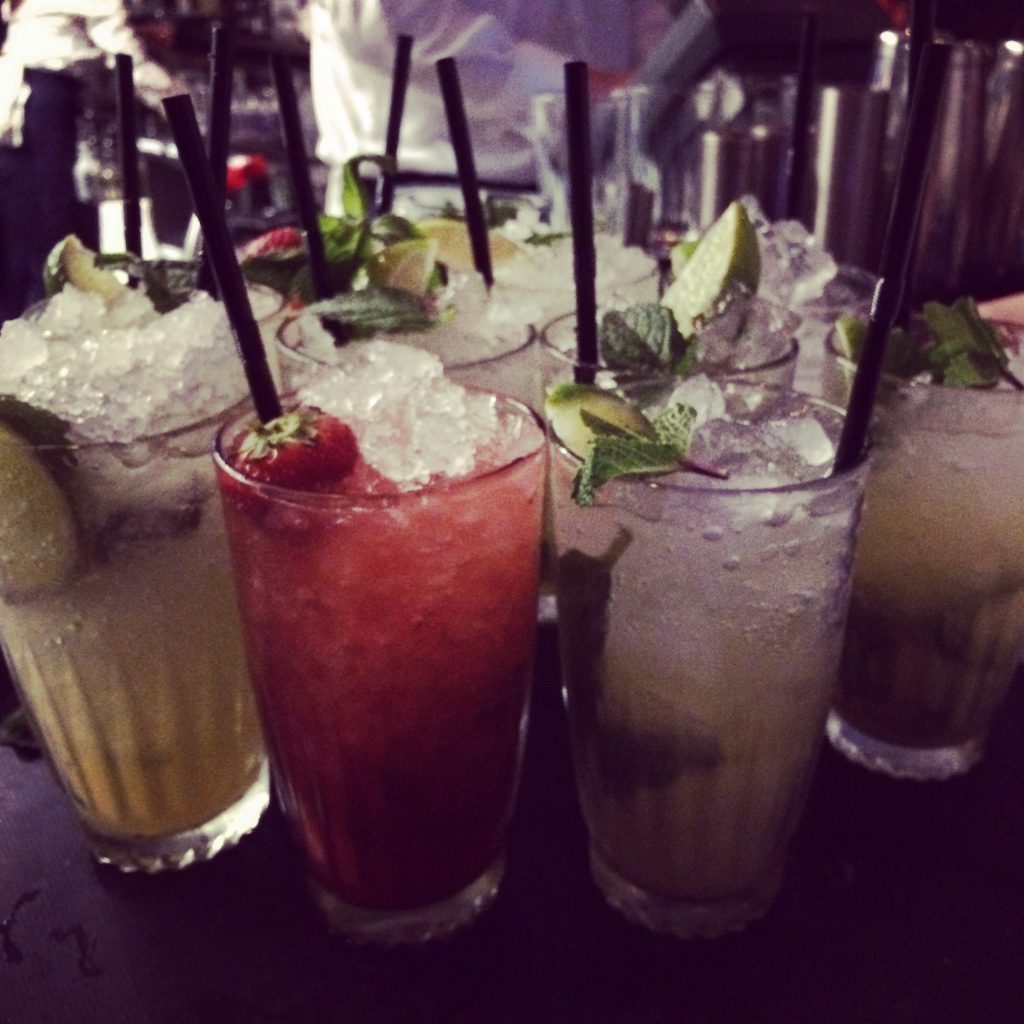 My favourite cocktail however was the Raspberry Ripple. As the name suggests, it tastes just like raspberry ripple ice-cream. Nom nom nom!

As well as a place to go on an evening out, Sky Lounge is also being pushed as a venue for business meetings. It definitely does have a bit of a corporate entertainment feel to it. (I’d quite like work meetings to take place in a bar – can someone make that happen for me please?!) 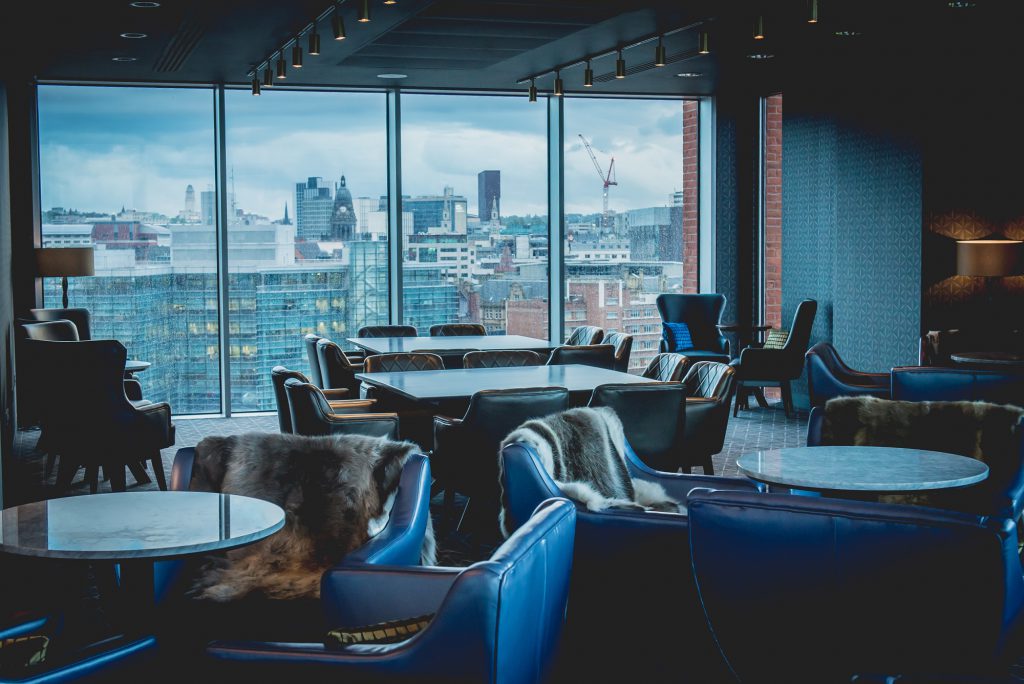 Sky Lounge also now offers brunch and afternoon tea – both of which look very tempting. We tried a little bit of food on the relaunch night – not just small canapés but pork chops too! – and it all tasted great. Hopefully they can deliver the same high standard normally as I have plans to go back soon for something to eat (leaving some room for a Raspberry Ripple cocktail for dessert!)