Staycation in Leeds – Day 1: The German market and our annual day of drinking 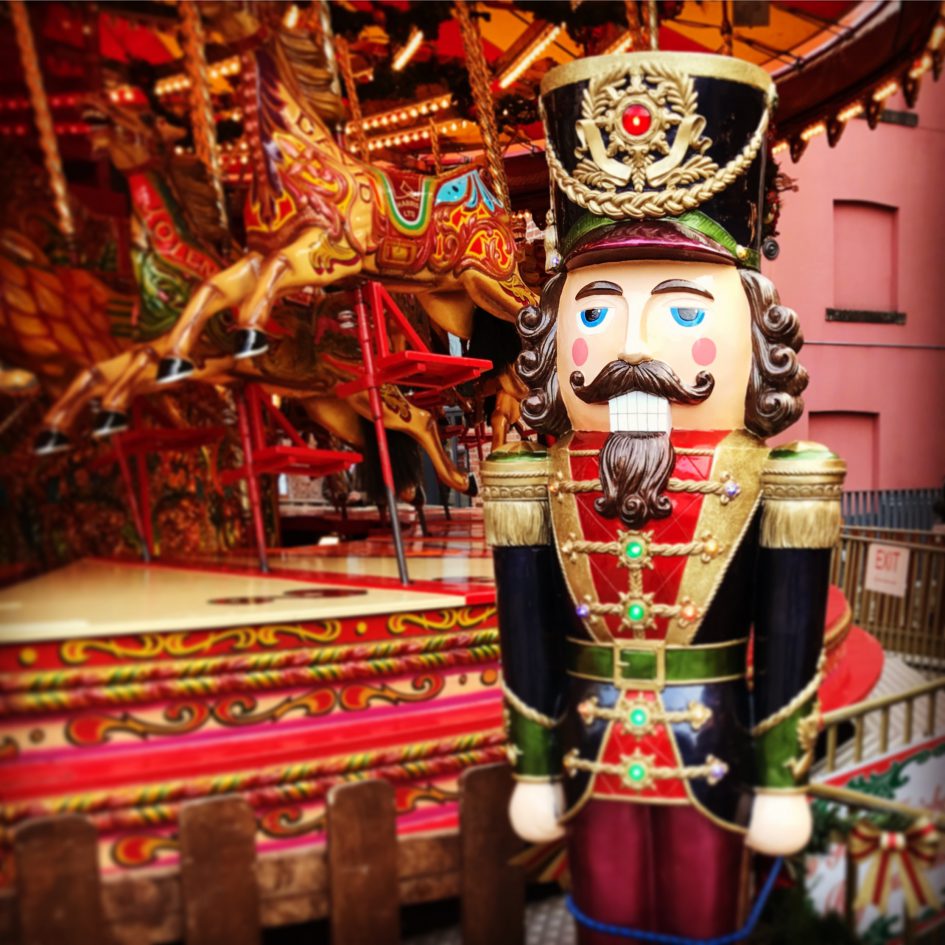 Nutcracker at the Christmas Market

For the last few years, James and I have taken a week off work around his birthday to have a “staycation” here in Yorkshire. We eat and drink ridiculous amounts of food, without any guilt, and try go to places we haven’t been to before as well as visiting some of our favourite haunts.

As part of this week off, we always have a day of drinking with our friends who are also celebrating birthdays and anniversaries. We normally spend a few hours in the German beer tent, but as that isn’t part of the Christmas market anymore, we did things a little differently this year.

It still started in the same way – a walk around Millennium Square enjoying the smells of sausages, sweets and sugared nuts. I admit that Leeds’ German Market doesn’t quite compare to the bigger markets, like Manchester, but if you’re in the area, it’s still a fun way to spend a couple of hours soaking up the Christmas atmosphere.

I enjoyed my first Gluhwein of the season as we waited for our friends Nick and Grace. We then had the obligatory bratwurst (which was ridiculously long!) and some more beer (for them) and gluwein (for me.) 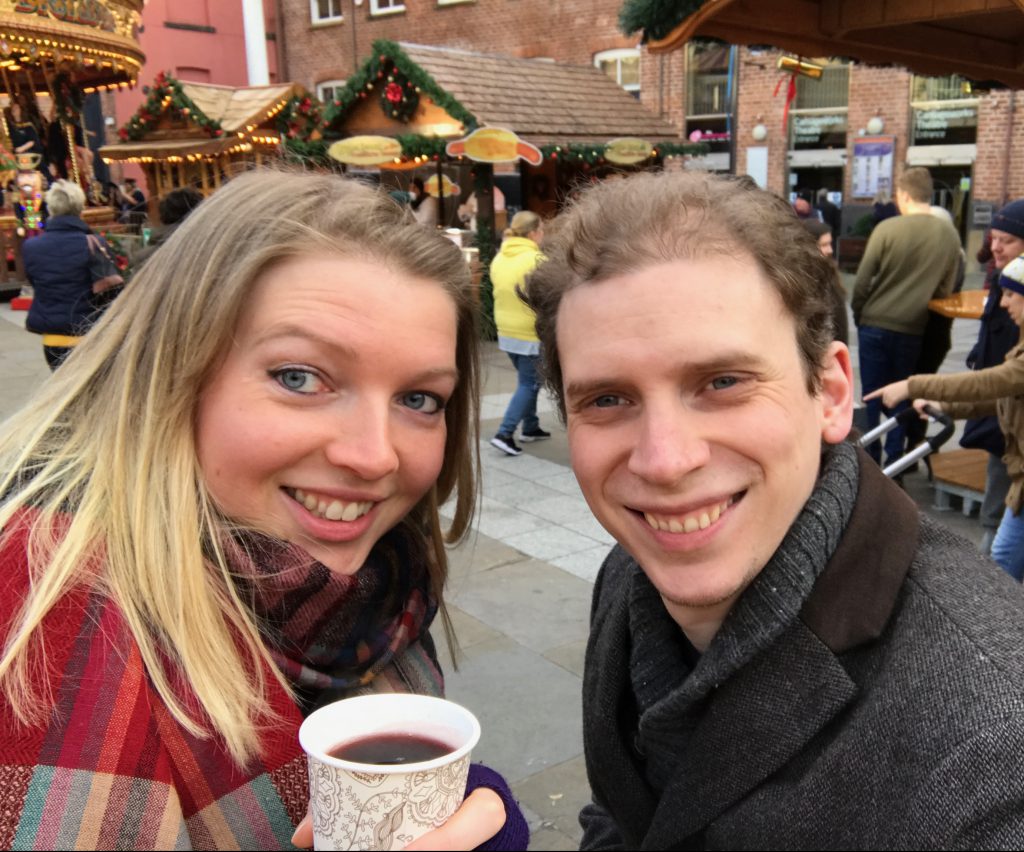 Enjoying my Gluhwein with the birthday boy

We next went to Thor’s Tipi – a new (temporary) addition to Leeds based in front of the art gallery. I’d been looking forward to trying this and wasn’t disappointed. There were benches to sit on draped in rugs and a big fire in the middle of the tent (you’ll have to be first in the queue when it opens to bag a spot near the fire though!). I took a break from the mulled wine and had a boozey hot chocolate instead. I pride myself on making an excellent Baileys hot chocolate, but must admit that this one tasted pretty great.

We were stood around for a bit before making a strategic swoop for seats as soon as we saw a group about to leave. As it’s quite a small tent, I can imagine it would feel quite claustrophobic with too many people in, but luckily they have door staff controlling the numbers. 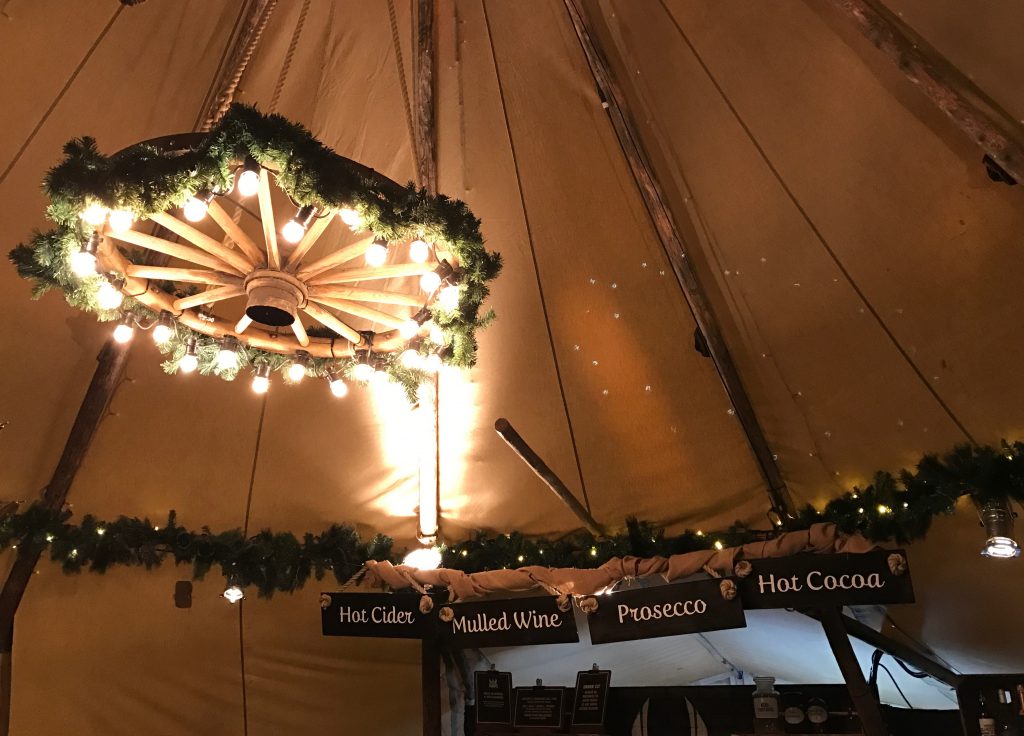 We just so happened to be out on the launch night of Stark’s Tavern – the pop-up Game of Thrones themed bar – so went to The Light to give it a visit. Our timing was perfect – we arrived just a couple of minutes before the bar opened which gave us time to coo over the “direwolves” (so, so cute!) and see the Jon Snow look-alike in the (washing up liquid?) “snow”. 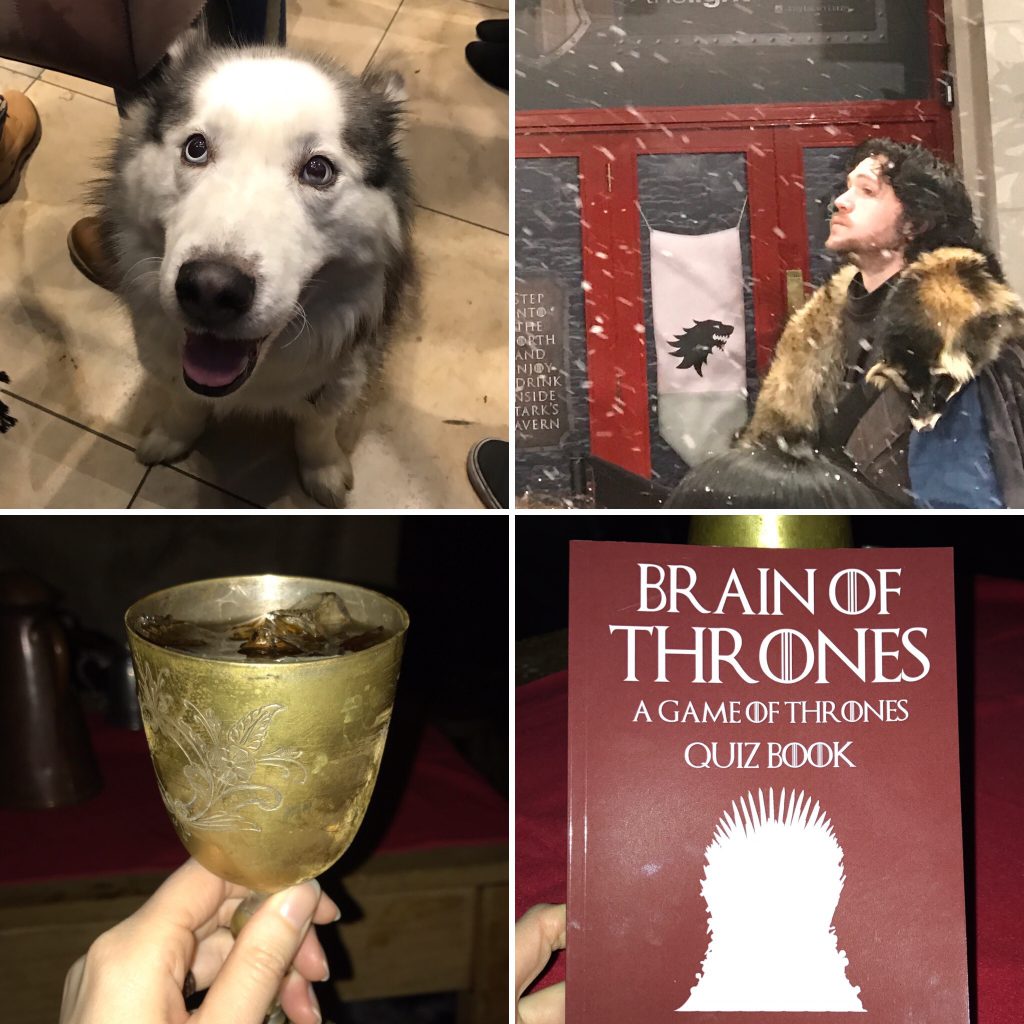 Drinks are served in tankards and chalices, and there was a table full of pies and bread that we could help ourselves to. With more lookalikes (there was a Dothraki enjoying interacting with punters) and an iron throne to pose on (new Facebook profile pics for everyone) it’s a “must visit” for any Thrones fan. If you’re not really into the GoT phenomenon, I wouldn’t bother visiting; it’s quite pricey, they don’t accept cards and the music wasn’t great. It was a brilliant stop-off for us though, as die-hard fans of the show, and getting to cuddle such lovely dogs is going to enhance any night out!

Next stop on our bar tour was The Turk’s Head, hidden in Turk’s Head Yard in between Trinity and Briggate. James loves it here because they serve Whittaker’s gin with juniper berries and thyme – his new favourite drink. 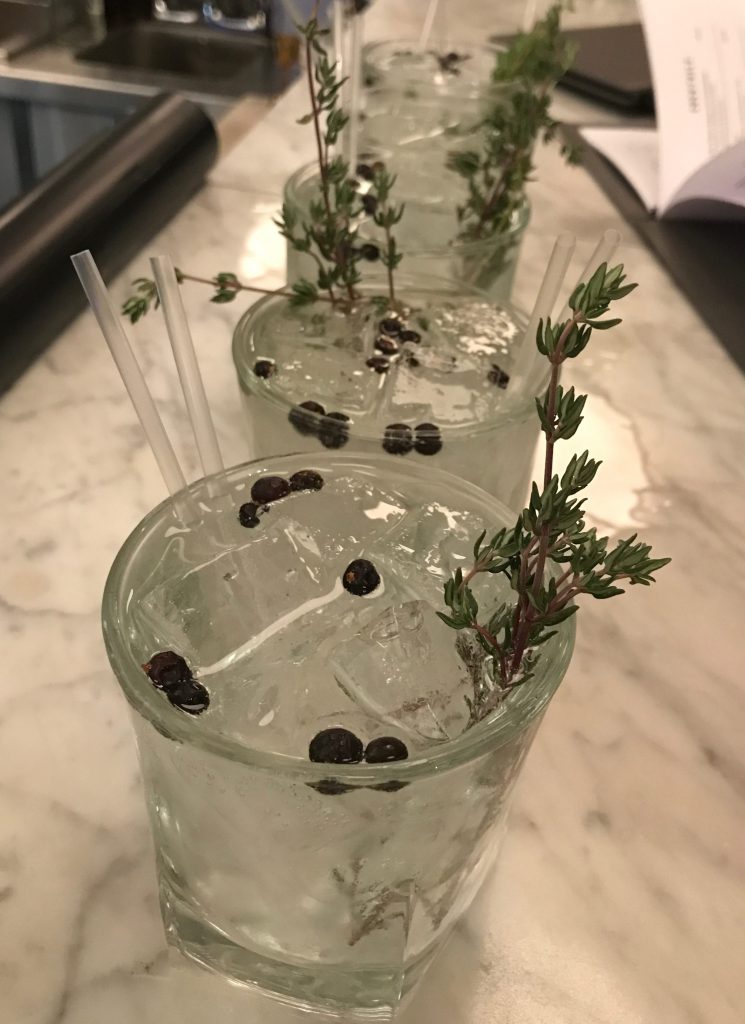 Continuing the gin theme (for any friends this and wanting to buy me gifts *ahem* – please note I am a rum drinker and one of the few people who doesn’t seem to be caught up in this gin craze!), we next went to Pintura, the Basque restaurant in Trinity opposite Clark’s. This is quite a small bar but has a good selection of cocktails and gin drinks. It’s got quite a good “date night” vibe.

By this time we’d worked up quite an appetite (despite the enormous bratwurst from earlier) and so ended up in Cielo Blanco, a Mexican restaurant at the top of Trinity. I’d not been before but will definitely be going back again. We ordered a ridiculous amount of food for five people, but managed to eat nearly all of it! Pulled pork, chicken, rice, wraps, sweet potato fries… so much food.

James and I parted with the group at this point and decided to call in at the Hedonist Project for a night-cap. The theme of the Hedonist Project at the moment is “The Mountain Lodge” – very après-ski. We supped at a honey, port and brandy drink before finally deciding it was time to go home. 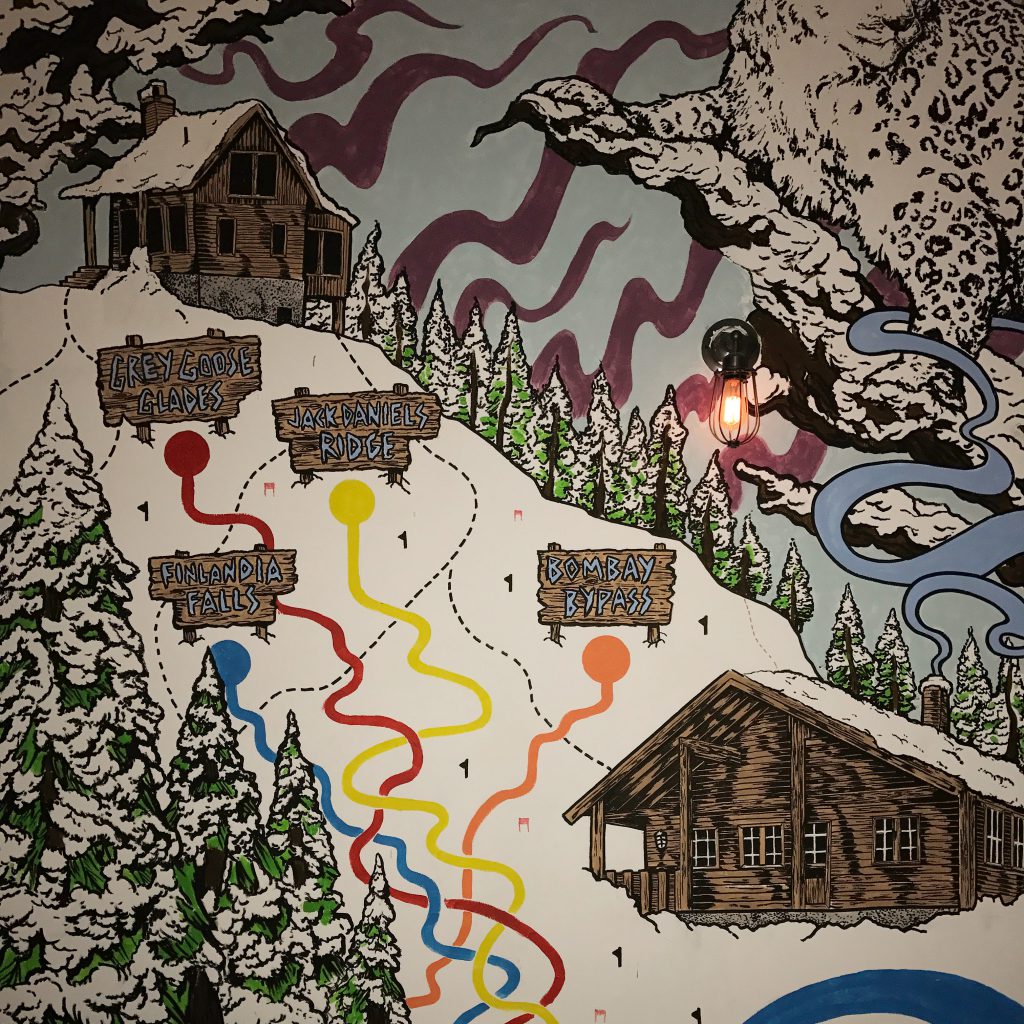 Wall art at the Hedonist Project

Amazingly, we were both fine the next morning. We really look forward to our annual day-off, drinking and eating with friends in Leeds, so I’m really glad that this year didn’t disappoint.