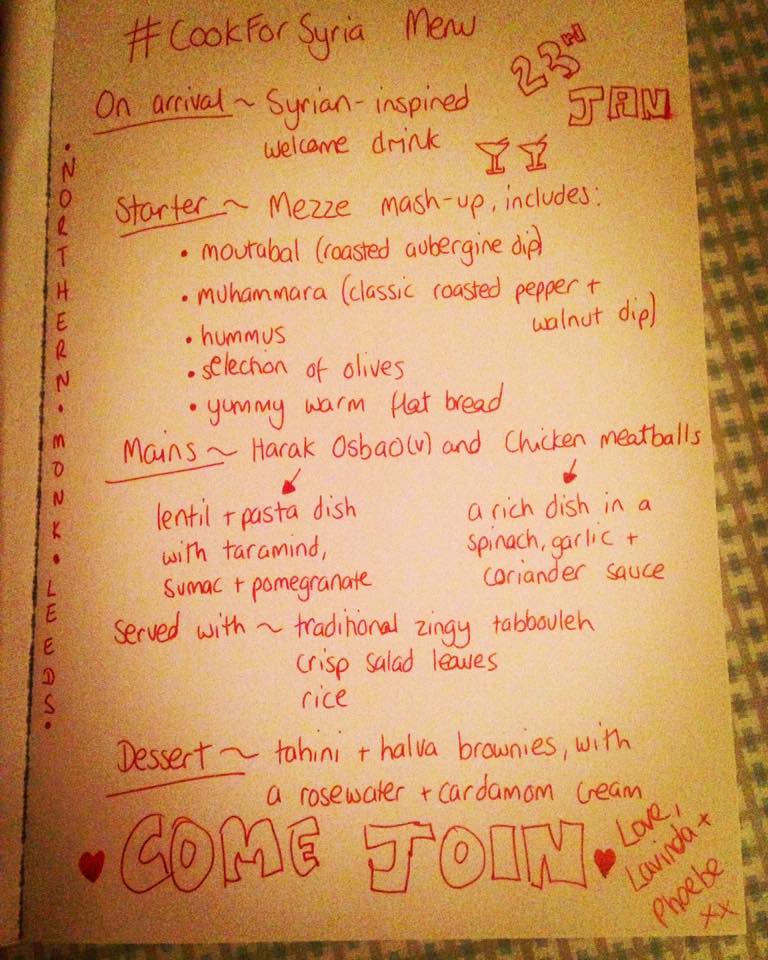 On Monday I will be going to a Syrian feast at the Northern Monk Refectory.

It’s part of the “#CookForSyria” charity campaign – “A celebration of Syrian cuisine in aid of the largest humanitarian crisis of our time.” This Leeds event has been inspired by the month-long campaign which took place in London towards the end of last year.

According to the campaign’s website: “The ongoing conflict in Syria has caused the largest humanitarian crisis since World War II, with the lives of more than 8 million children in danger. Many have lost family, friends and schools and have been forced to flee their homes. 50% of all Syrian refugees are children and boys as young as 7 are being recruited to fight. The risk of losing a generation grows with every day that the current situation deteriorates.”

I normally write about events after they’ve happened so I know whether I think they’re good or not and can pass on my recommendation, but as this event is just for one evening, I wanted to give people a heads-up so you can experience it yourself as it sounds like it’s going to be a really good night.

The Syrian supper is being organised and hosted by Phoebe Findley and Lavinda Kaur. Phoebe is a trained chef and a regular volunteer at Jamie’s Ministry of Food over at Leeds market. She also teaches students part-time at a school in York. Lavinda is a Communications Manager with experience in private and public sector companies. She’s passionate about charity work, particularly how we can support refugees affected by the conflict in Syria. She’s keen to harness an active interest and build a community in Yorkshire to help make a difference.

I spoke to Lavinda to find out more about the event and what had inspired the two of them to organise the feast. Here’s what she said:

What made you decide to host the Syrian supper?

“It was a no-brainer for us. I came across the #CookForSyria campaign on Instagram and thought that’s something we could easily do in Leeds, for a very worthy cause. We see the coverage on the news on a regular basis, and this is our small way of raising money and awareness for a very important topic. Also, it helps that Phoebe knows her way around a kitchen!”

Do you normally cook different cuisines?

“Phoebe can cook anything – she’s a machine. But it’s also about learning more about other cultures – in this instance Syrian culture – and a great way to do that is through food.”

How did you decide on the menu?

“Through lots of research. The #CookForSyria website was really useful and the cook book they’ve released on the back of the initiative has also been a great source for us. It was important that we went for a menu where the food can be shared and served easily in a relaxed family style manner.”

Have you been to other events as part of this campaign?

“No, this campaign kicked off in November last year and we only discovered the hashtag on Instagram a couple of weeks ago. We’ve been in touch with the organisers though and they’re supportive that the initiative is being taken nationwide. We’d really encourage others to get involved and host their own supper clubs in support of this campaign if they’re interested – we’re more than happy to help out and share our experience with others.”

Phoebe and Lavinda will be serving up typical Syrian fare in an informal, family style atmosphere. Here’s the menu they’ve planned for the evening:

On arrival: a Syrian-inspired welcome drink.

Dessert: Tahini and halva brownies served with a rosewater and cardamom cream.

The Cook for Syria supper in Leeds is taking place on Monday 23 January at The Northern Monk at 6pm. Proceeds go to UNICEF’s Syria fund. Tickets cost £21.83 p/p and can be bought from here. You can also join the Facebook page or follow them on Instagram @cookforsyria_leeds. If you’re unable to go to the supper but would still like to donate, you can do so via their JustGiving page.

It sounds like a great event – I’m looking forward to trying some new dishes with friends and family, knowing that the proceeds are going to a very worthy cause. 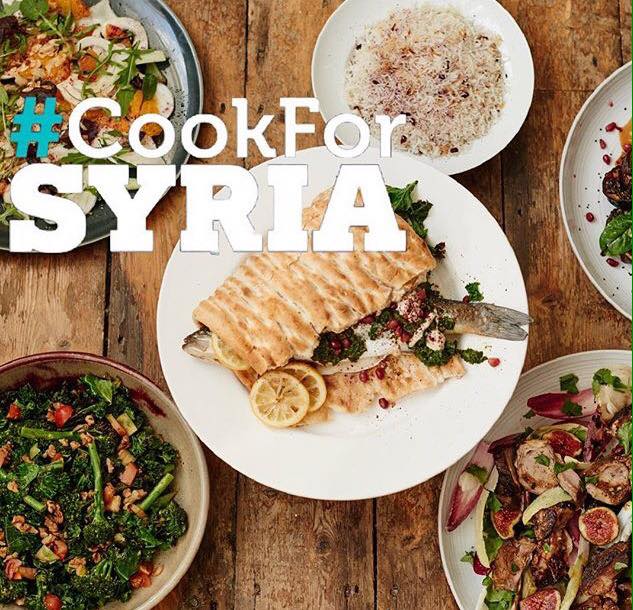