Quizzing and eating – my new Wednesdays 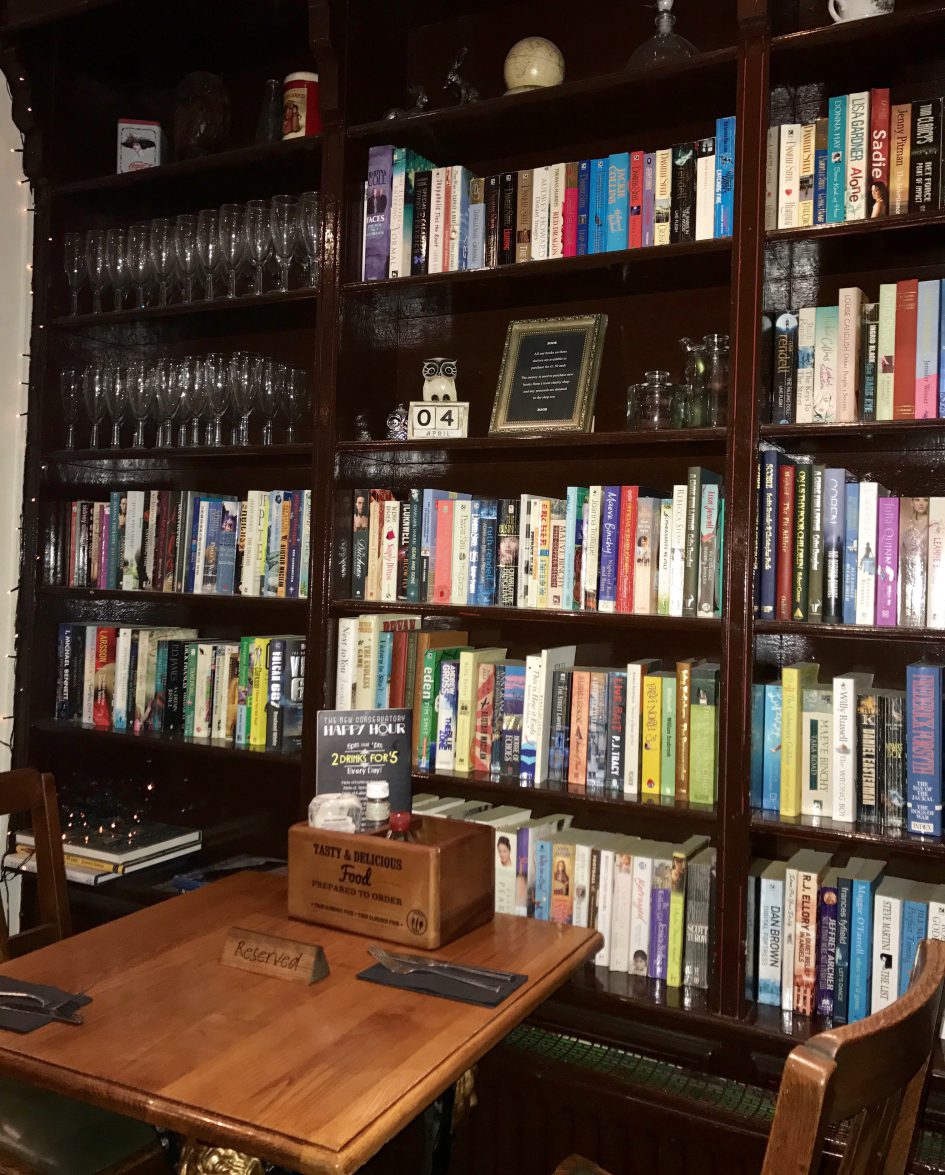 Don’t ask me to do something on the first Wednesday of the month, because I have plans.

As of last month, it is now tradition for me to go with a group of friends to the Waterstones book quiz and then go out for some food afterwards.

The Leeds Waterstones book quiz started in March and is going to be a regular event. Teaming up with Kirsty, Cat and Liam (friends, but more importantly, avid readers and quiz aficionados) I went to last month’s quiz. It started at 6pm and lasted an hour and a half (although from next month onwards I believe it’s going to finish earlier). It’s upstairs on the first floor in the coffee area so you can grab a drink and a bite to eat. The quiz is free and you can have teams of up to four. Just pop in to the store or give them a ring to register your team’s place.

Last month we came second (it’s only the winning score that was announced, but we’re extremely competitive and went to ask the quiz master how we did). This month however, WE WON! We were (still are to be honest) genuinely very proud of this achievement. I think all the other teams were there to have fun – but not us, we were there to win goddammit! 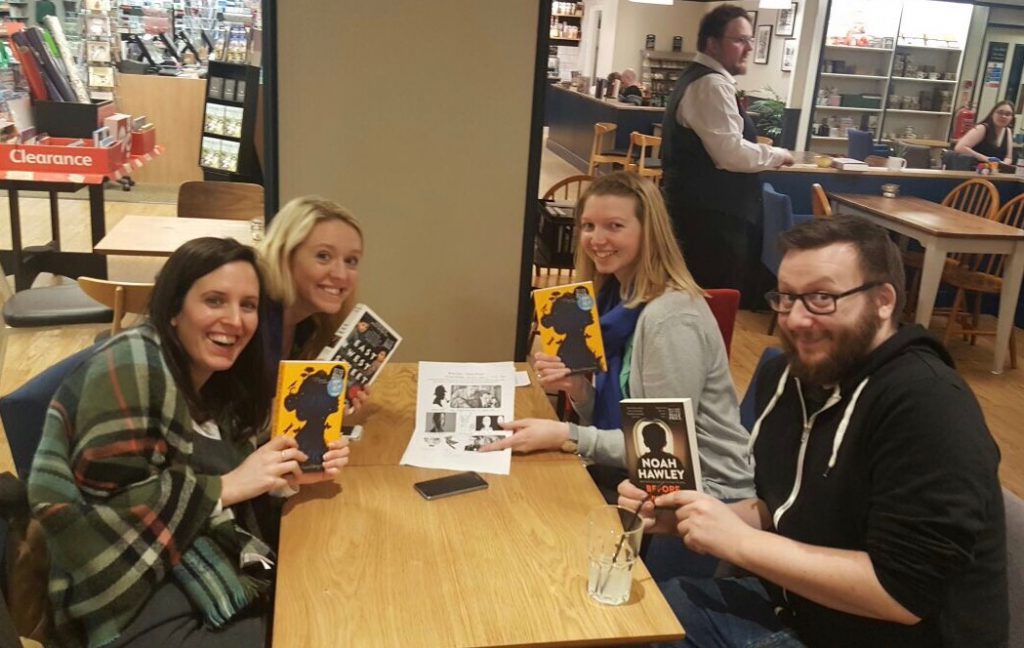 Using Kirsty’s strategy of “If you don’t know the answer, just guess anything” helped quite a bit – I got an image question right where the answer was Falstaff (“He’s fat and looks a bit Elizabethan”). I’m also immensely proud that I got an answer right about Winston Churchill, but feel a bit guilty that I know it from watching TV (everyone should watch The Crown – it’s amazing) rather than reading a book.

There are different rounds to keep things interesting, and each month one of the rounds is themed. Last month it was fantasy, this month it was romance. Surprisingly, we did as well on the romance questions as the fantasy (although it still really bugs me that I couldn’t remember who wrote Phantom of the Opera*.)

The winners (i.e. us this month; have I mentioned that yet?) got to choose a book from a selection of four. Winning a book at a book quiz is obviously an excellent prize! I went for The Girl of Ink & Stars – winner of the Waterstones Children’s Book Prize; Kirsty chose East West Street – a non-fiction about genocide, perhaps not light reading!; and Liam went for Before the Fall – a thriller.

I’m writing about the quiz because a) it’s another great thing to do in Leeds but mainly b) because I want to brag about it. But on the other hand, I really don’t want to publicise it too much in case it becomes more popular and we get more competition! I fear that our win might have been a one-off… (I’ll keep bringing it up in conversation for ages though.)

After the quiz, we joined our other halves (who are lovely but don’t know their books and therefore are of no use or interest to use between the hours of 6 and 7.30pm on the first Wednesday of each month) and went for some food. Last month we ended up at Trinity Kitchen which I’ve blogged about before. Trinity Kitchen is a great option if you a) want to try something new b) want food quickly and/or c) all want to eat different things.

This time we went to The New Conservatory as they’re running a 50% off your food bill offer from Sundays to Fridays in April. I’m on the Pink Gorilla Promotions mailing list so am always on the lookout for anywhere with a deal on. 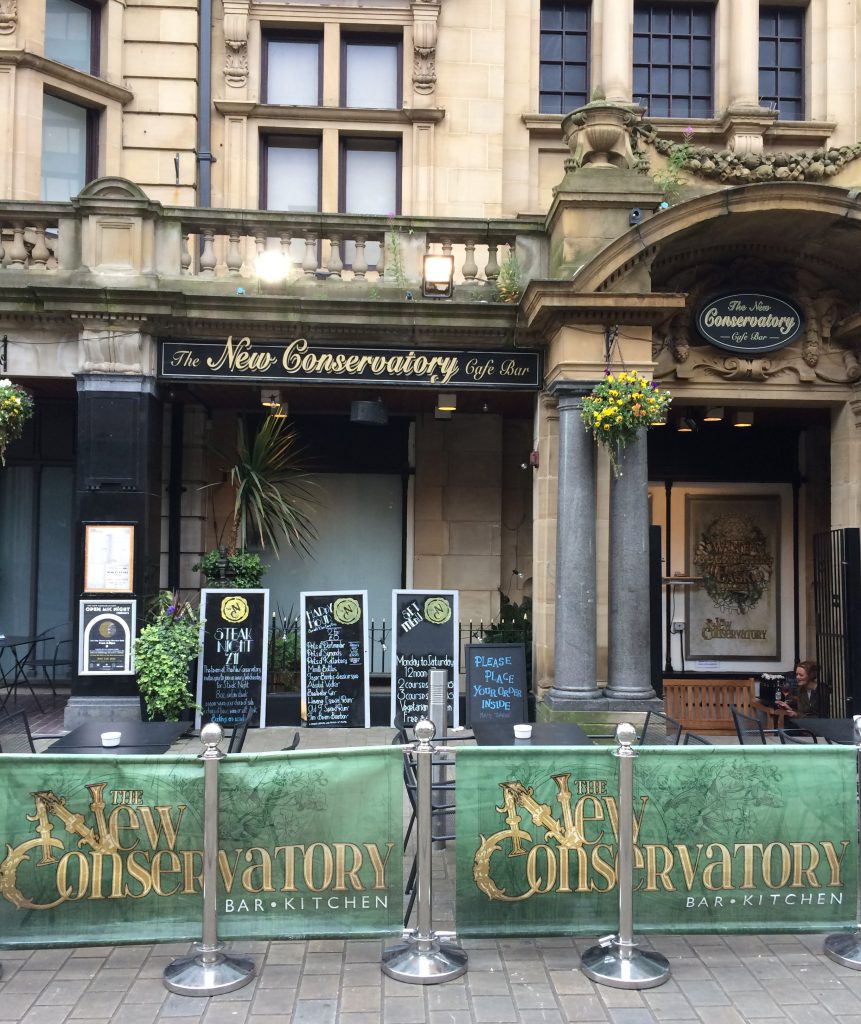 The New Conservatory is on Albion Place, next to the little Sainsbury’s, and looks like quite a swish bar from the outside. Inside, however, it has much more of a cosy pub feel to it, complete with rows of books, fairy lights, a pool table and a piano. 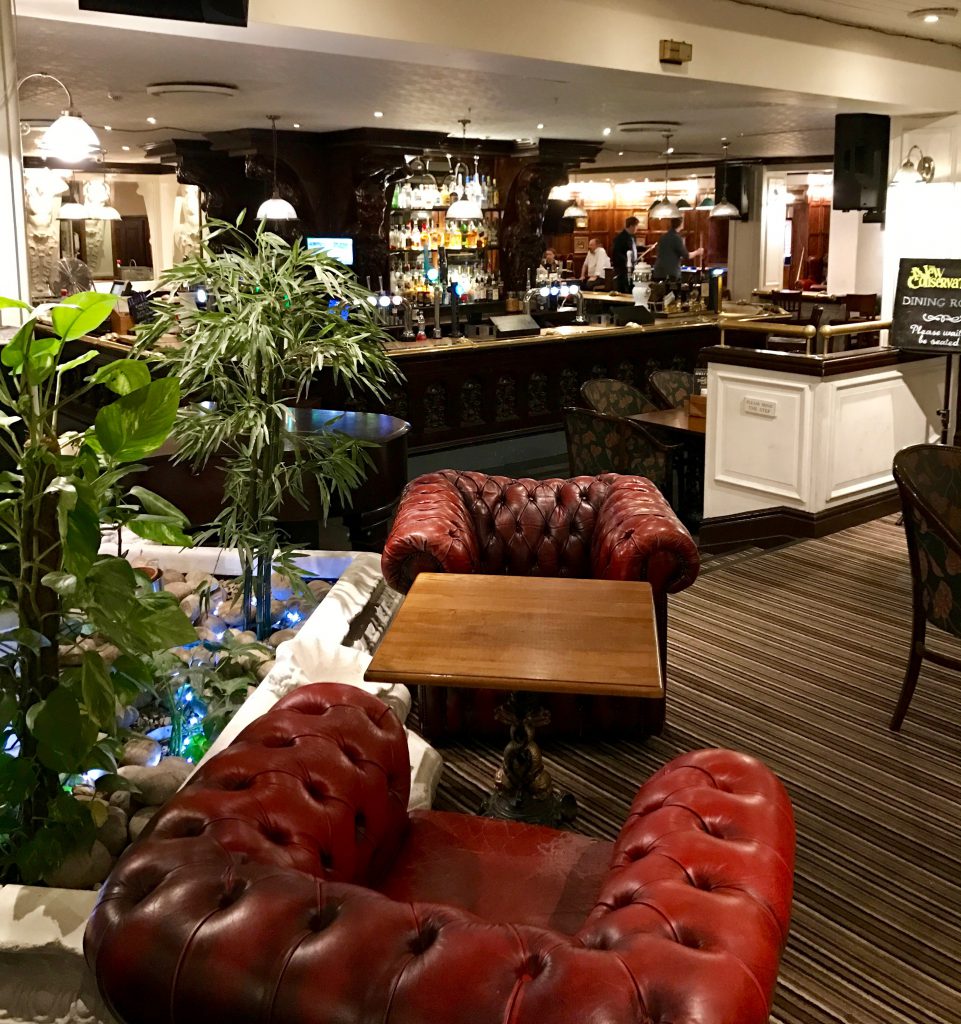 The food was really good. Between us we had: a massive portion of tasty chicken and chorizo risotto; wild boar and chorizo burger (with the cheddar swapped for goats cheese which apparently was a wise decision); halloumi burger; steak and chips – the group preferred the skinny chips to the big ones – with side orders of mac and cheese and also creamy garlic mushrooms. 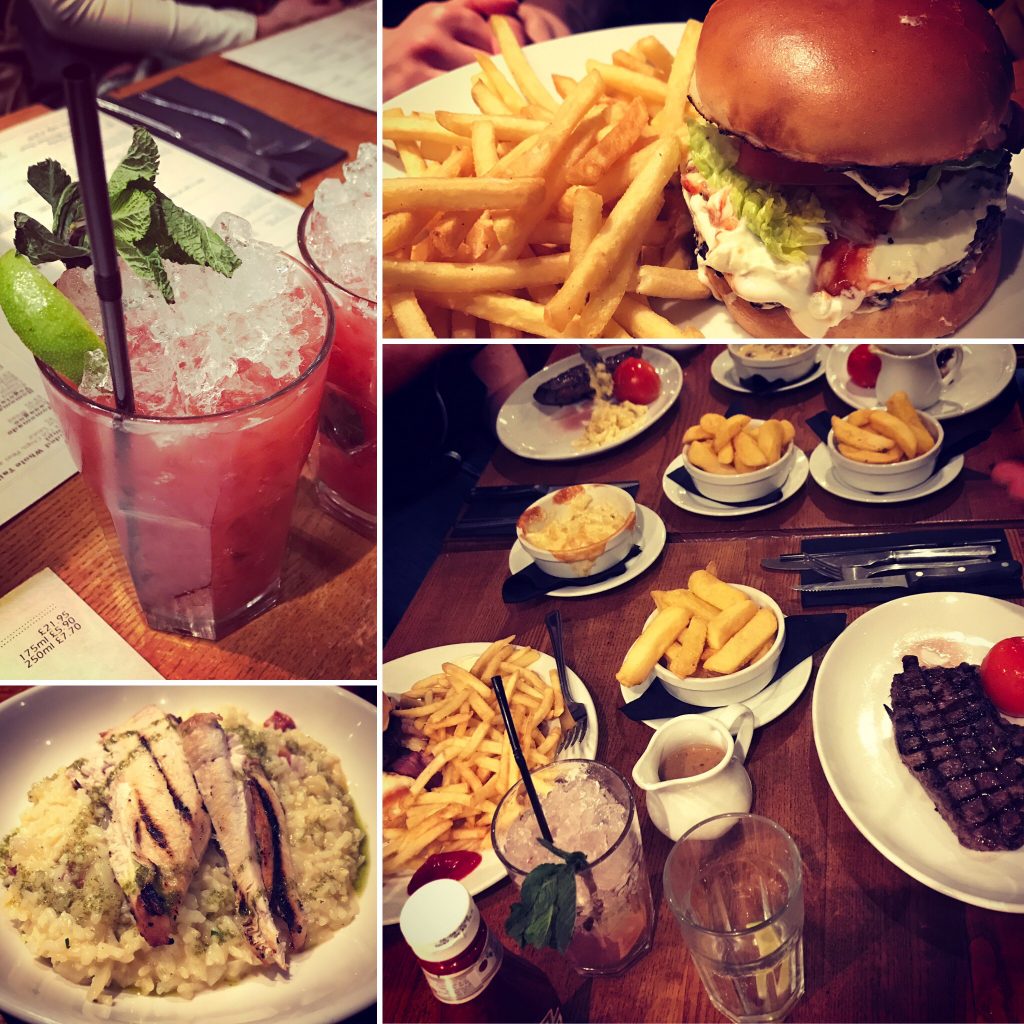 The New Conservatory has a happy “hour” every night – two for £5 on selected drinks from 5-10pm – and also a deal on steaks on Wednesdays. Thursdays they have open mic night (I’ve not been so can’t vouch for the talent but would be interested to go), as well as club nights on Fridays and Saturdays, and roast dinners on Sundays. 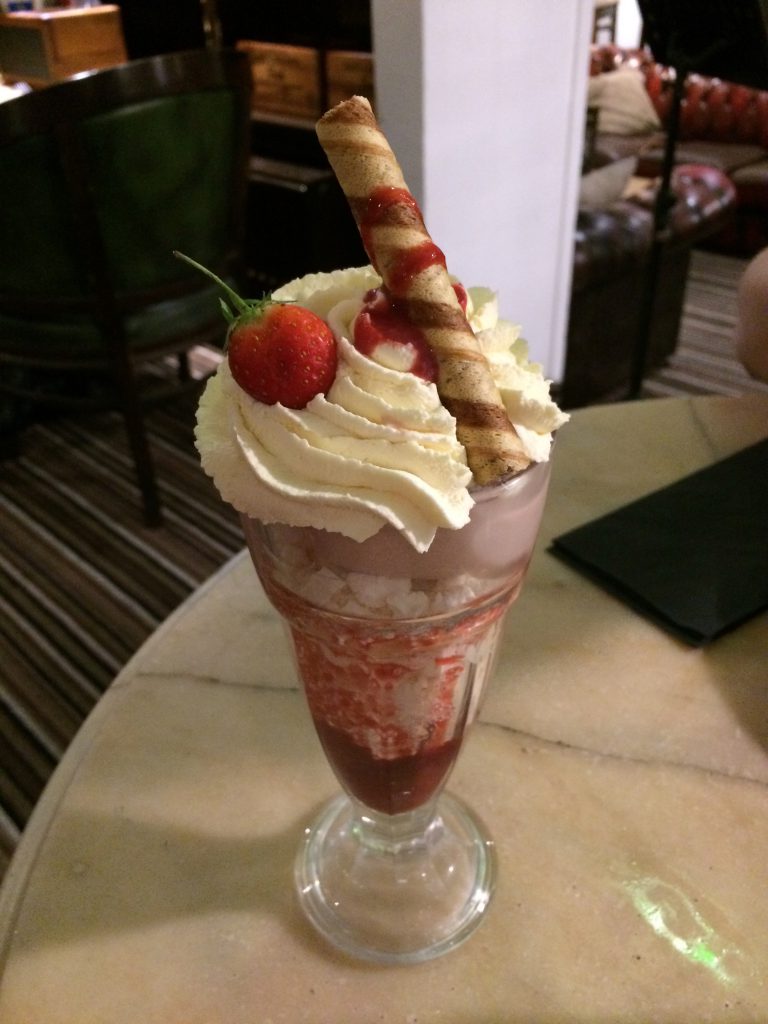 Our waiter was very good – putting up with a barrage of questions from a certain member of our party (you know who you are) – and I like the small touches there like the bill coming in an old children’s book.

The 50% off food deal is running throughout April so I’d recommend giving it a go if you’ve not been before (or going back if you have!)

Last month The Liquorist had a 50% off main courses deal, so it’s worth having a look round to see what offers are on. Distrikt – amaaazing tapas in a cool underground bar – have a half price offer on Wednesdays too, so that’s always a good bet.

I realise this isn’t my first blog post on books followed by food. If you’re a fan of browsing book stores and then going for a tasty meal afterwards, I’d recommend a trip to Headingley to peruse the Oxfam book store and then having a kebab from I Am Döner, just down the road.

*The answer is Gaston Leroux. You don’t get a point for saying “I’m sure it begins with G and then is like Garalaraoo or something”.