Going on a treasure hunt 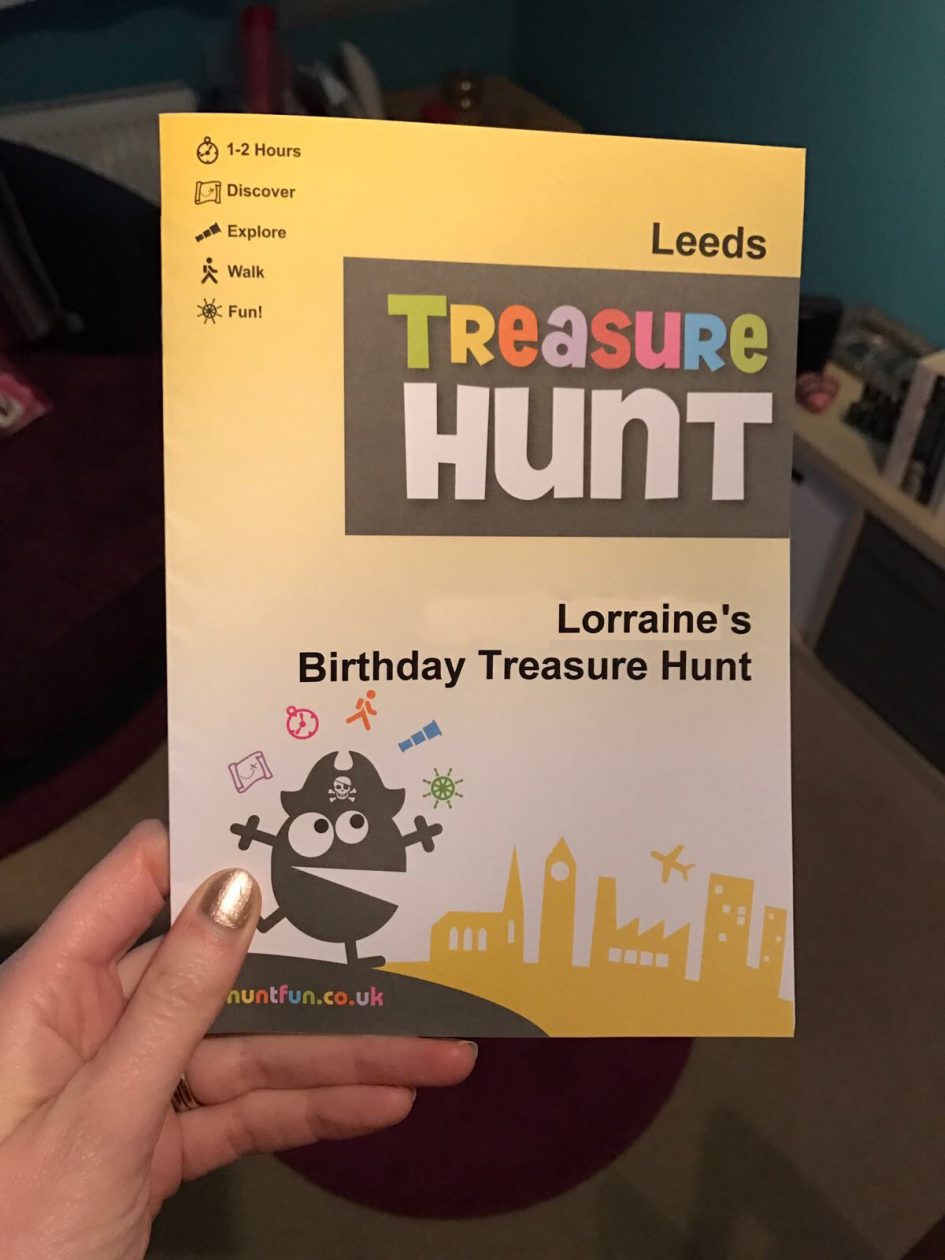 I’ve been on two treasure hunts in Leeds – both very different and lots of fun. One is more suitable for families, smaller groups and uses a traditional pen and paper approach, and the other is better for larger, older parties (perfect for hen do’s etc) as it incorporates lots of pubs and is more appropriate for tech savvy groups as it uses GPS and unlocks achievements on your phone. Today’s post is going to be on the more traditional treasure hunt for smaller groups.

Lorraine and I always get each other experiences for our birthdays, rather than tangible presents, so this year we and the James’s went on a treasure hunt around Leeds.

I found a Groupon Voucher for a personalised “Hunt for Fun” treasure hunt map. This was a booklet with Lorraine’s name on, containing a map, over 30 questions and also the answers in the back. Although I don’t think it’s quite worth the £15 retail price, it’s definitely worth getting if you find a discount for it, or if you go for the £6 printed version. 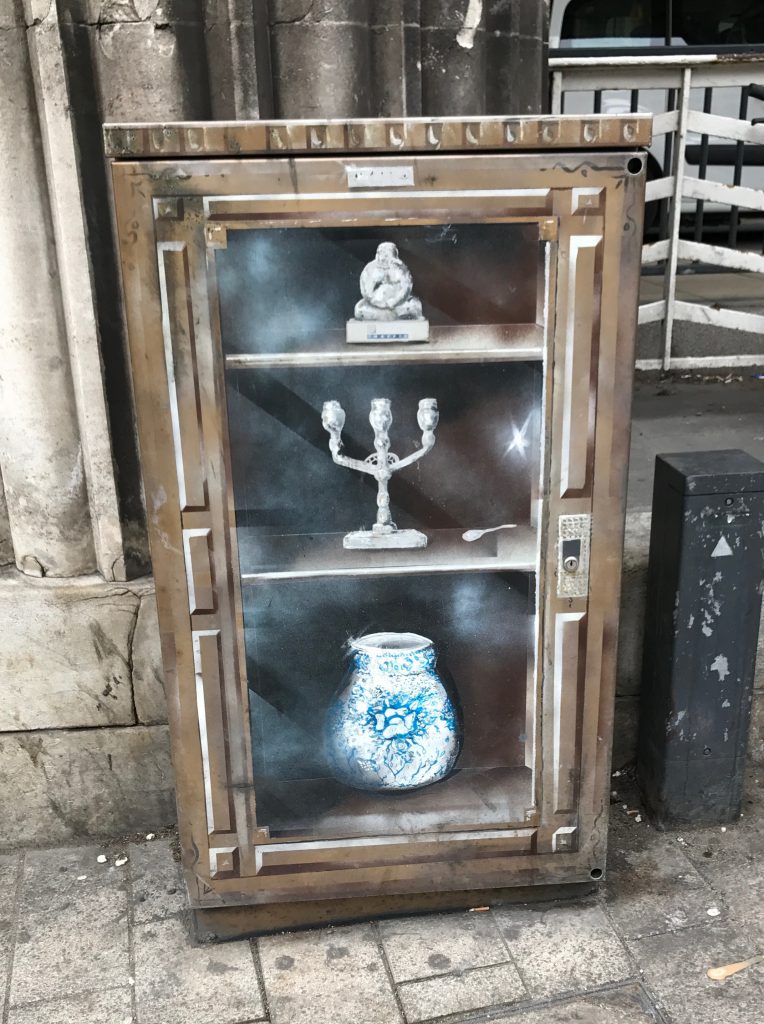 One of the unusual things we spotted en route

The treasure hunt started and finished at the train station. If you did it without stopping, it would probably take an hour to do (although you can extend this by going off to look at some of the “points of interest” on the route.)

We had lunch at The Adelphi about a third of the way into the trail and also drinks at the Slug & Lettuce near the end, so managed to make a full afternoon out of it. The Adelphi does excellent pub food and I’m also a big fan of it because it’s one of the few places I’ve found that serves Cawston Press cans. I am obsessed with these drinks (rhubarb is the best flavour) and am on a mission to find out where else I can get them from in Leeds. 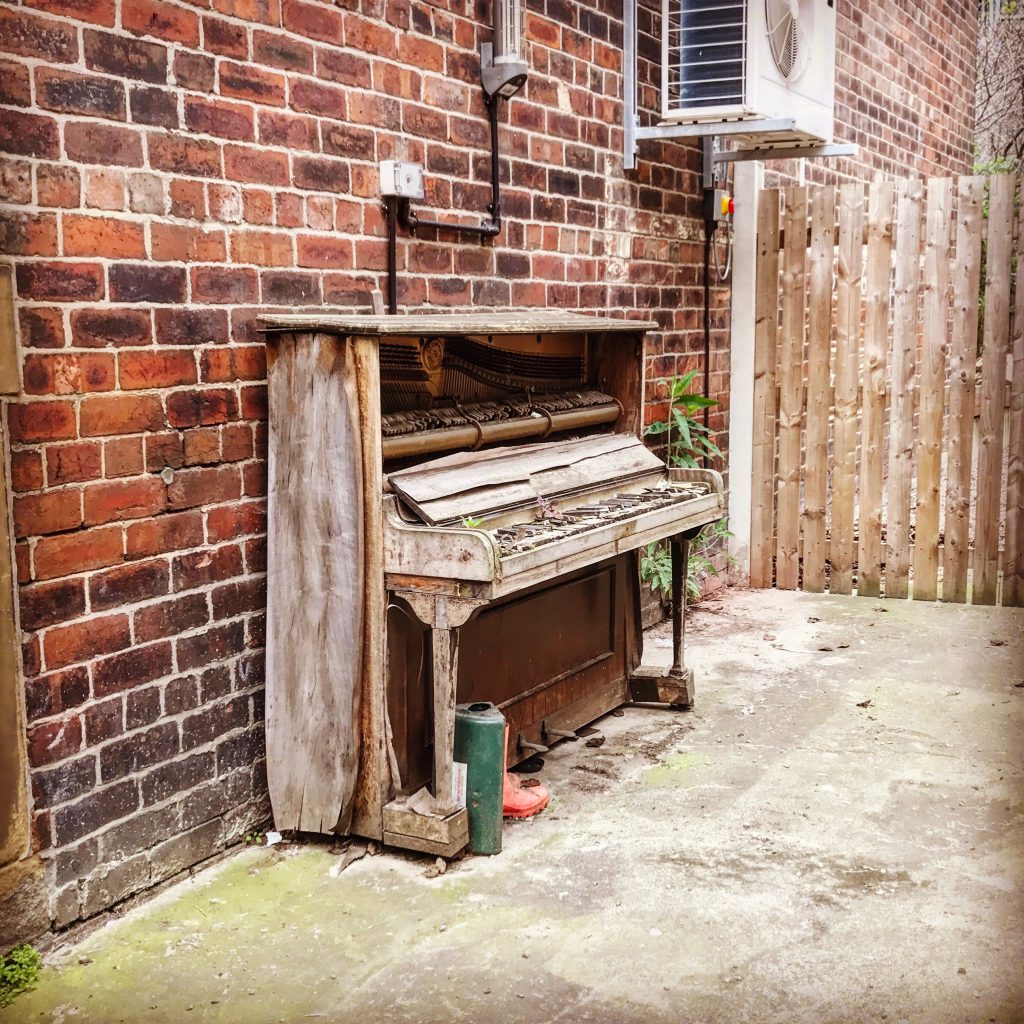 Random piano behind a gate

The plan was to also stop in at Wappentake (bakery and bar – what a fabulous combo) for cake and a drink but we were too full from lunch. If you wanted to do the treasure hunt later on in the day, you could easily incorporate dinner on Park Row/Greek Street.

It was a good trail, although two of the questions were outdated – one was regarding a pub near the start of the hunt which has since changed names, and the other was a question near the end – we were pretty sure the answer was on a building that was either covered up by scaffolding or had a new shop front. 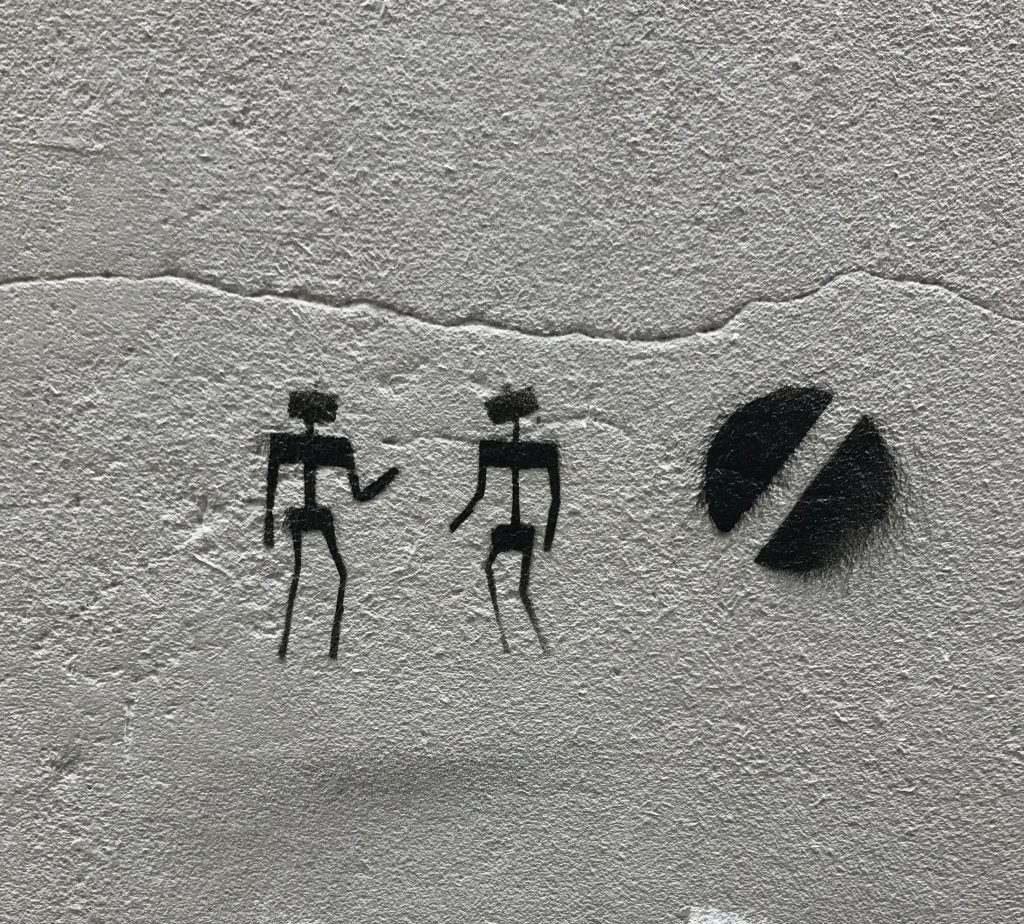 Another unusual find. (I have no idea if this is just random graffiti or if it means something. I’m hoping it’s not offensive or in support of some terrible group!)

The downside to this treasure hunt was the lack of treasure! Other than the satisfaction of getting the answers right, there was no prize. As it was a birthday present, I’d bought a few handbag-sized treats to plant along the way, but this mainly involved me putting the gifts on the floor two seconds before Lorraine approached the answer. If you were doing this with children, perhaps one of the adults could run ahead and hide treats somewhere a little less obvious. 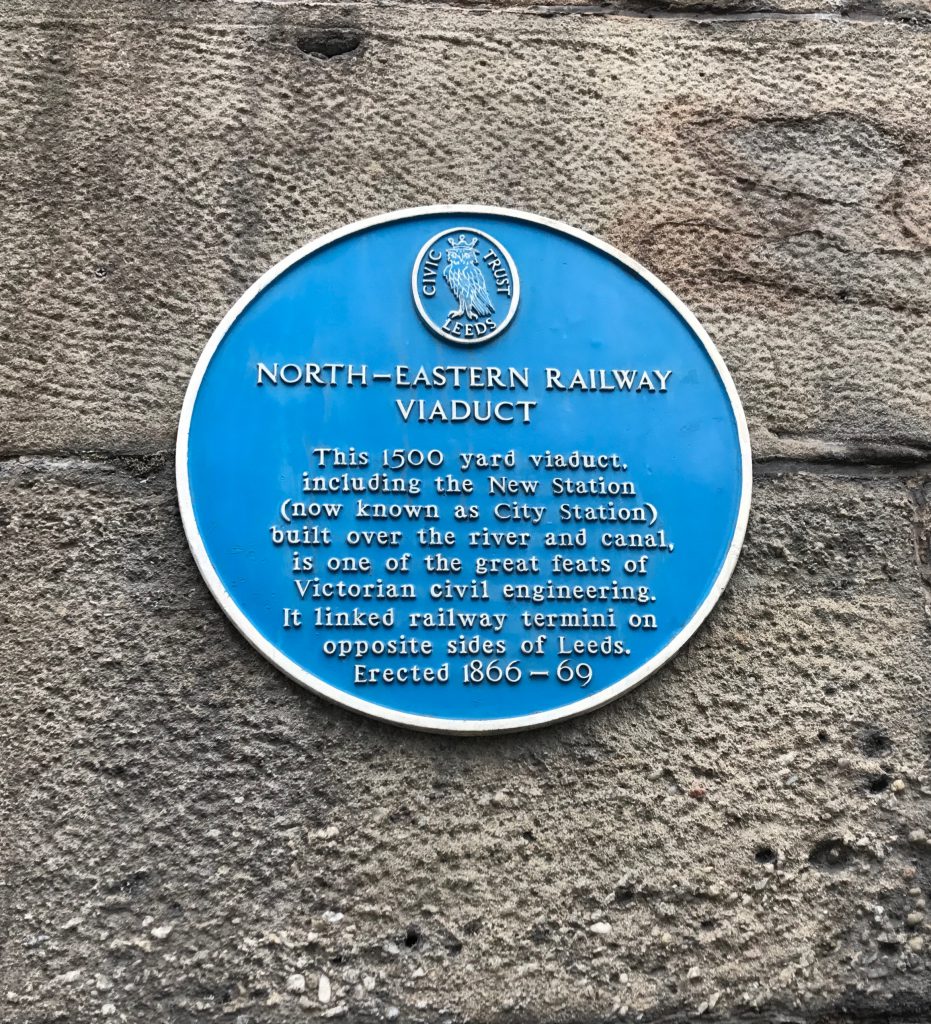 One of many, many blue plaques in the city

This trail took us along Dock Street, past Kirkgate market, across Briggate and down Park Row. It was a good route although just one small area of Leeds. If you had the time and were so inclined, it would be easy to create your own route and questions. I’d never realised how many plaques there were around Leeds! Look out for signs on buildings, tiles on bridges and unusual art on walls. There’s plenty of information about the area’s history if you just take the time to look. 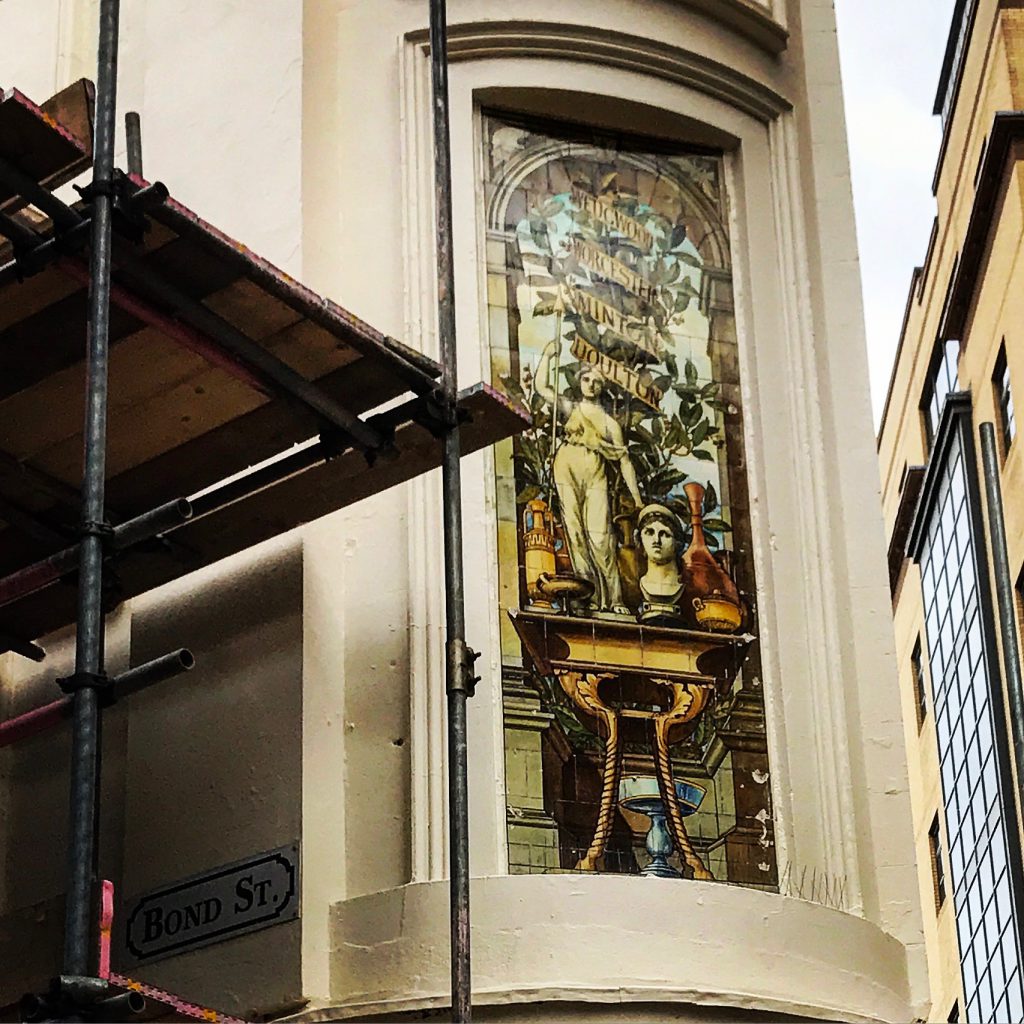 Something else I’d never noticed before.

Treasure hunts like this are a really good way to explore the city; you end up seeing things you’d never noticed before. It makes you look up a lot too, above the usual shop signs and on to the ornate building tops and unusual statues and symbols.

A very fun way to spend an afternoon in an amazing city!