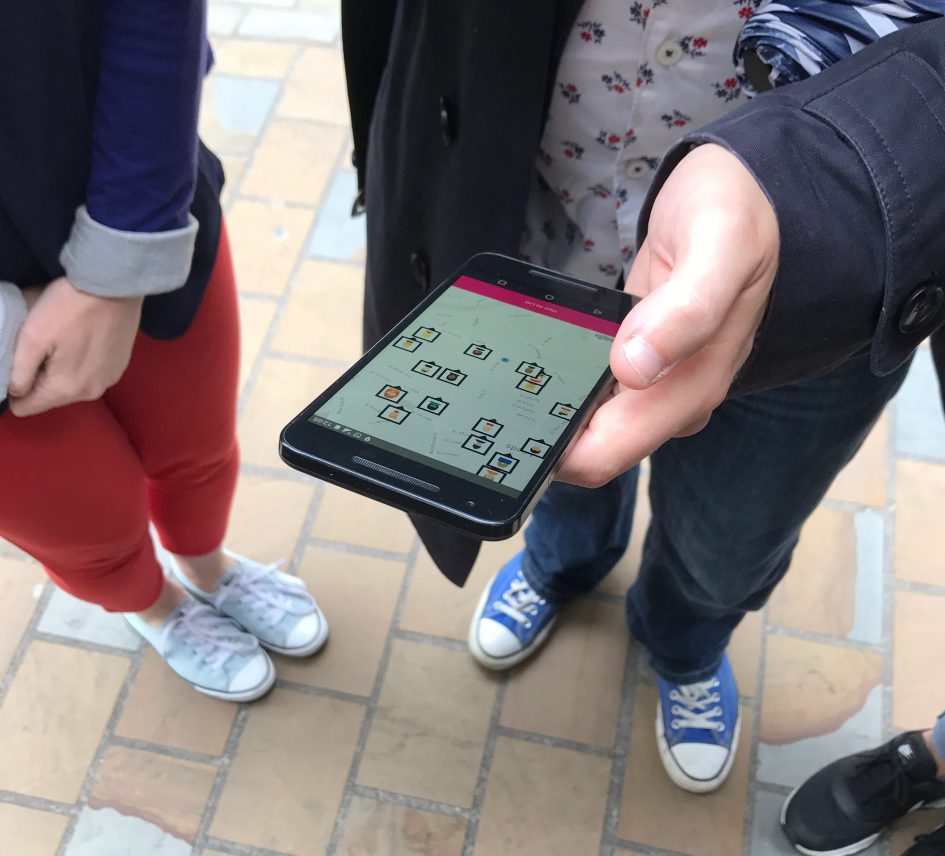 Having enjoyed other treasure hunts around Leeds, and knowing how much my friend Chloe likes a good murder mystery, I was pretty excited to see an event advertised on Facebook for a city-wide manhunt, promoted as a cross between Cluedo and PokemonGo!

Run by CluedUpp, these “manhunts” are taking place across the nation on different days. I went with a group of friends on Saturday to the Leeds event and we had a great time.

We were given instructions to download the app before the day of the event. It’s important to note that so far the game only works on Android phones, so if your group are all iPhone converts – you’re a bit stuck! It must be an Android phone.

CluedUpp advise setting off between 10am and 1pm in Trinity Shopping Centre. There is a leaderboard and prize for the fastest team, but this is based on how long it takes your team to complete the mystery, not the earliest time in the day, so it doesn’t matter when you start. Just make sure you don’t hit the start button until you’re ready to set off – read the instructions before you begin otherwise you’re just wasting valuable time!

We had 18 virtual witnesses to find, 14 possible suspects to eliminate and five murder weapons to rule out. The app included a map showing us where to go to get the witness statements. We had to walk to various different areas of Leeds to unlock the trivia questions which would reveal a testimony. The questions were all multiple-choice and Leeds based. Although you don’t need to know the location to follow the map, it does help if you have some general knowledge about the city so you can answer the questions. If you did the manhunt in a place you didn’t know, you could just guess and live with the time penalty for any wrong answers. 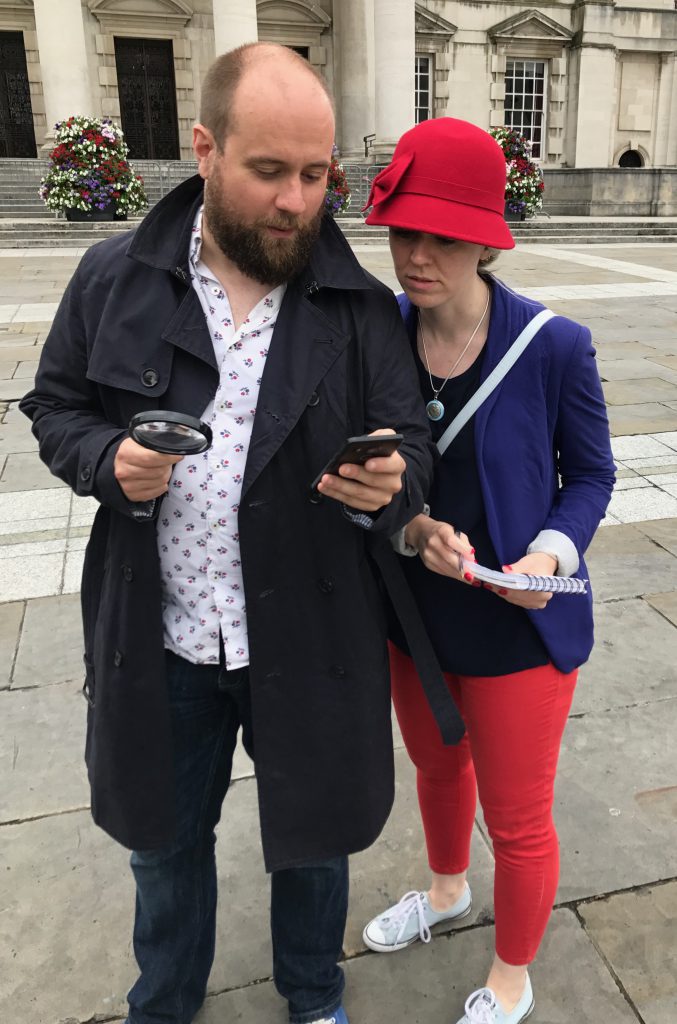 Detectives Downer and Scott – on the case. (I made them pose with the magnifying glass, but the film noir detective coat and Miss Marple hat were all their doing!)

It’s actually a really good way to explore a new city as you do end up walking quite far – I’d recommend that you wear trainers! It took us two hours to find the witnesses and we didn’t exactly dawdle. (In fact, our team took it rather seriously and there was barely enough time for conversation, photos or enjoyment of any kind in between finding the witnesses as we wanted to be in with a chance of winning!) If you were a bit more leisurely and included stops for drinks and cake (always a good idea) the event could easily take three to four hours. The winning team did it in just over an hour but they must have been running everywhere to find all the witnesses!

The app itself was really good; it was easy to use and the GPS was reliable. It was a bit hard to take in the information with just one member of the group reading out the facts (I’m one of those people who has to read things myself rather than just listening) but it was made a lot more fun by Ed’s various different witness accents. CluedUpp state that groups should have up to six members and I agree that you wouldn’t want any more – with a larger group it would be quite difficult to share the information and probably would be a case of too many cooks…

We were surprised at how many other groups we saw taking part. As it was just a one day event, unlike the birthday GPS pub treasure hunt I’d done which you can do any day, we saw lots of people in the city crowded around phones, many of them dressed up. (Prizes were offered for the best dressed team as well as the best team name and groups were encouraged to upload team selfies to the Facebook event page.)

Once we’d unlocked all the witnesses we put our heads together to try and work out who the murderer was. I must admit that we were all a bit disappointed in the ending (probably because we didn’t get it right until about the fourth try!) and felt like the answer wasn’t something we could have worked out. However, once we had guessed it and the app provided information on how you should have arrived at the right conclusion, we realised we’d made just one error which had thrown a spanner (not one of the murder weapons!) in the works. I’ve got some tips for how to approach the game in the right away at the bottom of this post. I don’t give anything away about the actual suspects, just some useful advice on how to play it properly, but you might want to stop reading after the line if you don’t want any help at all! 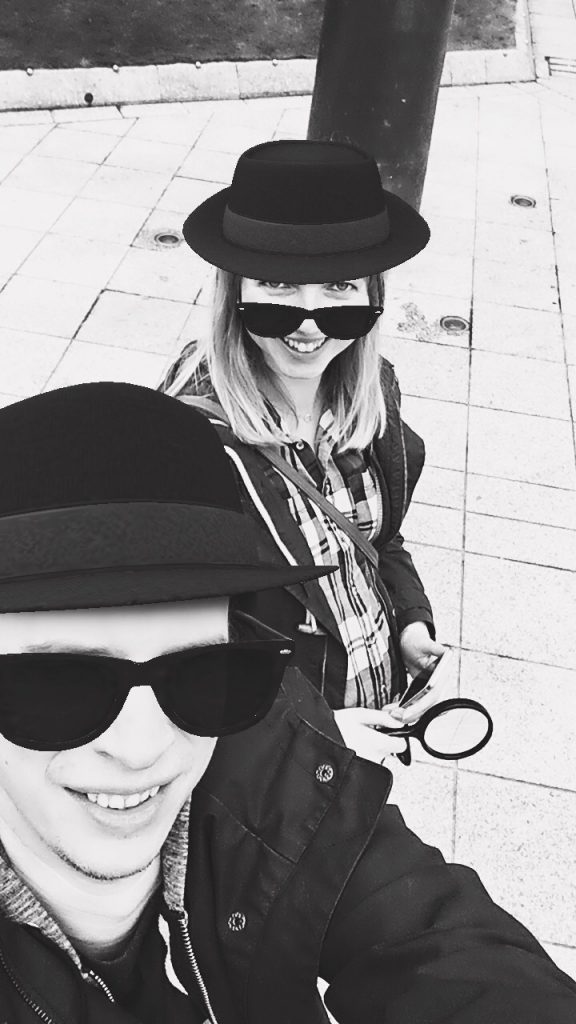 We signed-up at the early bird rate which worked out at £5 per person, and definitely felt like we got our money’s worth. It was good to be doing something different with friends, being outside, thinking in a different way, and exploring the city.

As you would expect from me, we started and finished the day with food in Leeds. We had an absolutely amazing brunch at Laynes Espresso and ridiculously naughty desserts at Kaspa’s, but both were so good I’m going to blog about them separately.

For those in West Yorkshire, the next CluedUpp Manhunt event is taking place in Huddersfield on 23 September and I’d definitely recommend it.

Tips for playing the game: