Treating my pregnant self 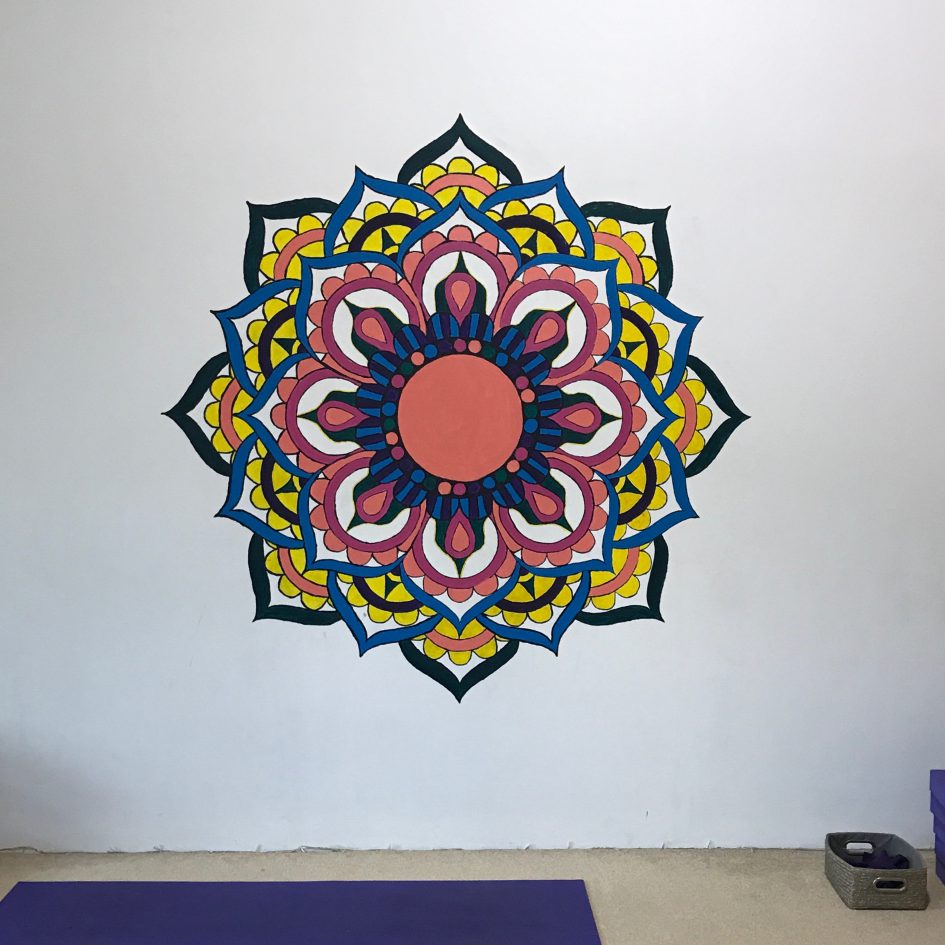 In true Han style, I’ve been ridiculously busy the last few months (mainly enjoyable stuff!) but have decided that at 33 weeks pregnant, now might be a good time to start slowing down and thinking more about what my body (and mind and spirit) needs, rather than my social calendar.

In the last week, as I finally had the time to do so, I tried three new activities in Leeds, but all related to looking after myself – so the best of both worlds!

Last Saturday I tried a pregnancy yoga class for the first time. I’ve done a couple of yoga courses at work before but never been to any classes elsewhere. This class was at Yoga Hero, down on the Dock, near the Royal Armouries. I’ve been wanting to go to Yoga Hero for a while now, and heard good things about it from friends, but never had the time to try it. It’s always looked like a very zen and inviting space whenever I’ve walked by and the variety of classes is really impressive. (And I know this shouldn’t effect your enjoyment of a yoga class, but I think the website’s really good and I’m more inclined to like something if they’ve got a decent web presence!)

I was a little nervous about the class as I’m always slightly apprehensive about doing something for the first time (Will I know where I’m going? What I’m doing? How much am I going to embarrass myself?) but Rachel, the instructor, was very welcoming. We spent the first 15 minutes lying on our backs or sides (depending on how many weeks we were / what felt comfortable) and did some relaxation breathing and visualisation – there’s a term for it but I’m not enough of a yogi to remember what it was. I wish all exercise classes including 15 minutes of lying down! The rest of the class was spent doing gentle strengthening and stretching exercises.

(I went again this morning and had another great session, this time themed around your senses and the elements. We started with meditative relaxation again and then did some movements and positions that just felt really great. I even forgot I was pregnant for a couple of minutes at one point. After the class I felt like I was ready to take on the world.)

If you’re worried about not being able to do certain positions due to various niggles or pains, Rachel can adapt the pose for you and there are also plenty of bolsters, blocks and blankets to make yourself comfortable. The class is suitable for both long-term yoga-goers and complete newbies; although Sanskirt is used, all the movements and terms are explained.

I ended up buying a block of 5 sessions (which I’ll just about fit in if Baby is on time!) although you can turn up on a drop-in basis too. (It’s cheaper if you buy a block of classes though.) There’s free parking on the roads around the Dock and it’s easy to find a space at that time in the morning. 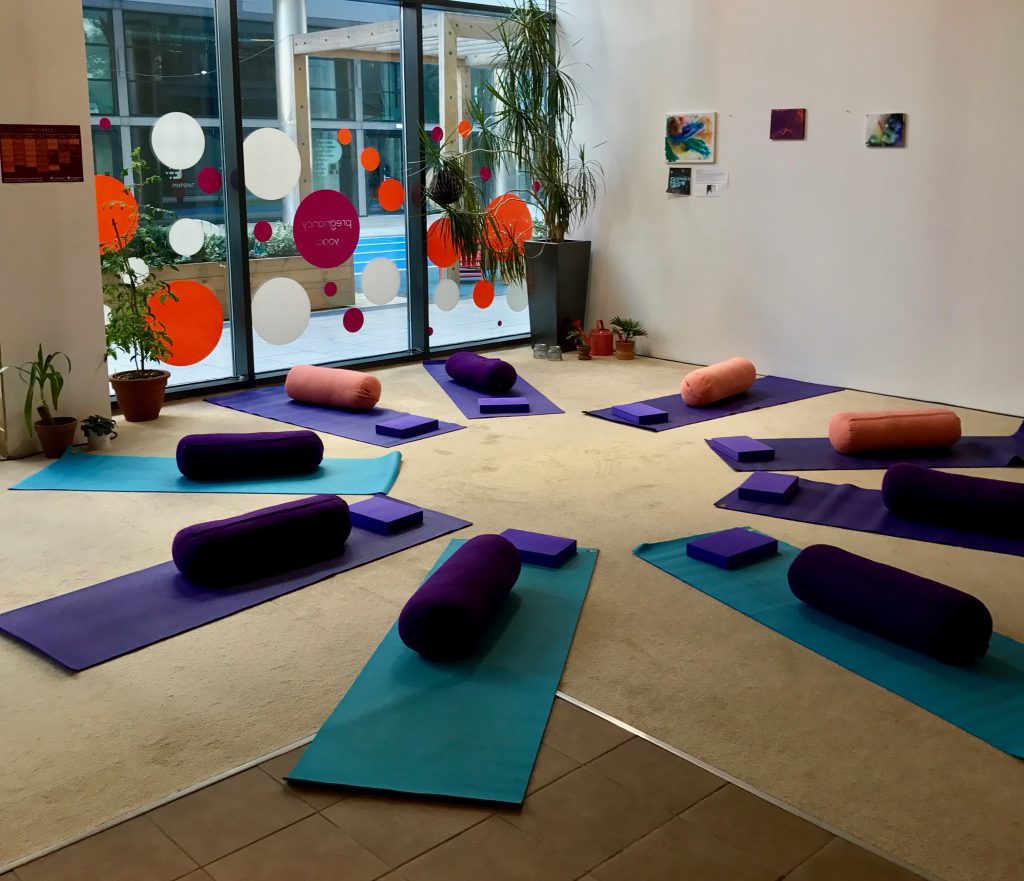 I had the Monday off work and originally had plans for a spa day. This ended up falling through but I decided to still treat myself to a massage. I’ve suffered from backache quite a bit during this pregnancy and probably would have benefited from a few massages earlier on.

I found Aroma Restoratives online (another good website) and booked through Treatwell which saved me about 20%. It’s located in L1 Performance, Wellington Place, next to the Good Luck Club and so is handily close to the train station and also a few car parks. The treatment room is within the gym, so you do hear the odd noise or two (also noises from outside where they’re working on the car park – lots of drilling) but Kathryn, Aroma Restoratives’ founder, has done a good job of blocking out most of the noise and light from outside and creating a nice, relaxed spa vibe inside the room.

You can choose between 30, 60 and 90 minute massages. I went for the half an hour one as I wasn’t sure what to expect and whether I’d enjoy it. I already have plans to book myself in for an hour’s appointment in a couple of weeks though!

As we were short on time and I’d specifically mentioned backache, Kathryn used some of her specially mixed pregnancy oils and focused on my back, shoulders and scalp. Next time, I’m looking forward to the same but my legs and feet as well – particularly if I’ve reached the “cankle” stage by then! (For those wondering how you get a back massage when you’re pregnant and have such a big bump, I was sat on a stool – like a drummer’s seat – and it was really comfortable.)

I felt really relaxed afterwards and much less achey.

I’ve been looking for a local aquanatal class for ages, but there’s been nothing in the area, or at least nothing when I’m free, so I was really pleased to hear a new class would be starting in the Nuffield Health Gym within The Light. The Blooming Babies aquanatal classes take place on a Wednesday lunch time, although there are other classes in Guiseley and Harrogate in the evenings too.

I went to the first class on my lunch break, again feeling a little nervous about doing something new. I’d not been in the Nuffield Health gym before – you’re more likely to find me in La Bottega Milanese, directly underneath Nuffield, eating a brownie rather than in the gym!

Annie, who runs Blooming Babies and all the classes, is a practicing midwife as well as a fully qualified aquanatal instructor, so you know you’re in good hands. I did feel a bit silly jogging around the pool and paddling around on a noodle (just saying that makes me giggle) but that feeling is outweighed by how nice it is feeling so light in the water and knowing that you are doing exercise without hurting your joints. I could definitely feel my muscles working for certain exercises.

As the course runs during lunch time, it’s only short – 35 minutes – but hopefully this will be extended for those who don’t need to rush back to work. I think 45 minutes would be ideal. Apparently the other classes are longer and allow for more social time as well. Feedback I’ve heard from other people is that meeting other expectant mums is actually one of their favourite things about the classes. There’s a Facebook group to join too and from what I’ve seen, it’s a good forum for asking questions and sharing advice.

If you’re interested in attending this class, here’s some practical info that might be useful to know: You need a padlock for the lockers rather than a coin; there are showers (not particularly powerful) and hair dryers, although if you tie your hair up in a bun you can get away without washing it as we didn’t go under the water at all; I’d recommend bringing flip flops – the changing room and side of the pool was really slippy; and there’s a place to hang up your towel by the pool if you’d rather be covered up for longer.

Again, you can tell I enjoyed it as I signed up for a block of 5 classes. Now I know what to expect, I’m really looking forward to the next class. 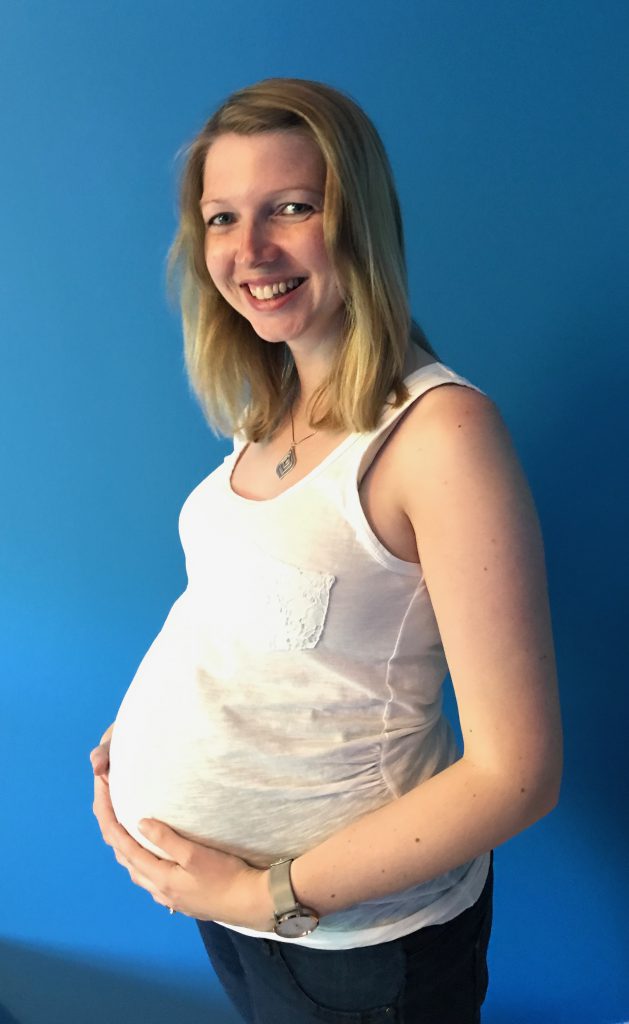 A very pregnant but relaxed and happy me

I thoroughly enjoyed my week of new activities and wish I’d found time to try them a little earlier on in my pregnancy. I’d definitely recommend all three to any other local mums-to-be.