How to do a beer festival right 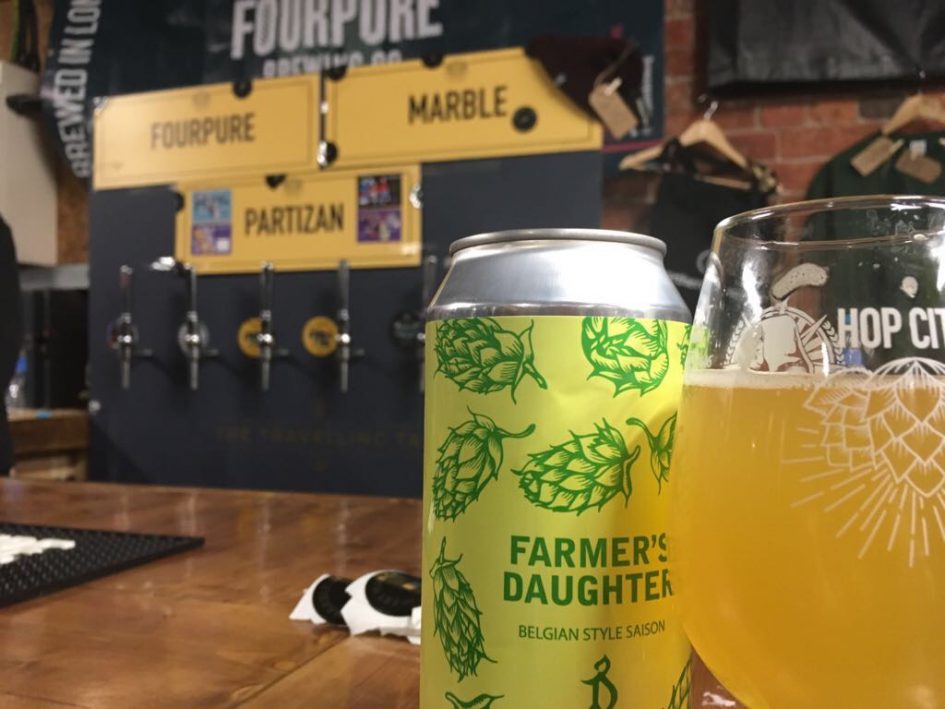 Earlier this year, Northern Monk Brewery hosted Hop City Beer festival. It seemed like a really cool event and was one a few of my friends were excited about, however it wasn’t something I was interested in attending as I don’t drink beer! Luckily, my good friend Kirsty is not only a fan of sampling different beers but she’s also an excellent writer and offered to write a blog post for me about the festival. It’s been a good few months since Hop City, but this weekend Northern Monk Brewery is hosting another innovative beer festival – Dark City – a festival combining “rock music, dark beer and fire”. The event launched yesterday and there’s an afternoon and evening session today (Saturday 4 November). I thought it would be a good time to feature Kirsty’s review of the Hop City Beer festival (which never made it to the blog at the time!), held back in Easter, to give you a flavour of what you might experience at this weekend’s event.

I’m particularly impressed that Kirsty managed to take notes right through to the very last beer and her summary of each drink wasn’t affected by the volume of alcohol consumed!

Leeds is fast becoming a beer-lover’s paradise: from the laid-back yet achingly cool Tall Boys to the legend that is North Bar, there’s probably enough choice and variety to keep you on a year-long bar crawl.

Before we go any further, a confession: hoppy beer is not my favourite kind of beer. What really makes me go weak at the knees is tongue-curlingly sour beers, wheat beers, goses and Berliner weisses. However, my boyfriend, Ed, is a total hop-head. When people ask him what beer he likes, he tends to answer in terms of the hops, then has to dial it back from ‘citra and mosaic’ to more common ground like ‘American IPAs’. But as Hop City started to announce its line-up, we both got more and more excited.

Not all beer festivals are created equal

The festival was a world away from the bigger beer festivals I’ve been to previously. For one thing, unlike the Leeds International Beer Festival, each beer was priced the same. It was a token per third, and each token cost £2.50. My friend Nick, an out-of-towner who also came to the festival with us, actually sounded the Yorkshire war cry of ‘HOW MUCH?’ when he looked up the cost. But in hindsight I think it was a really good system. Apart from a few cans all beers were served in thirds, with each of us collecting an elegant little third-pint glass as we arrived.

Hop City had five sessions, and we went to the last. Again, unlike larger festivals, there was no danger of any of the beers running out as each session saw a new keg of each beer tapped. One of my pet peeves about beer festivals is that if you end up at a later session, you sometimes arrive breathlessly at a bar just in time to see them flipping the pump clip round as the brew you had your eye on runs out. It’s disheartening, and I like that Hop City had the foresight to avoid it.

Also, with regard to the comparatively hefty price tags: there were some really, really good beers here. Plenty of them were unique to the festival, imported as a one-off or brewed especially for it. As well as some well-known breweries (Kernel, Brewdog) there were some smaller, further-flung breweries that I’d never heard of.

The festival made full use of the beautiful old flax store that houses Northern Monk’s refectory and brewery, with tables and bars set up across three floors, with a wide choice of food trucks outside. Perhaps because it was so well organised, it never felt overcrowded and there were no long waits for drinks or food. 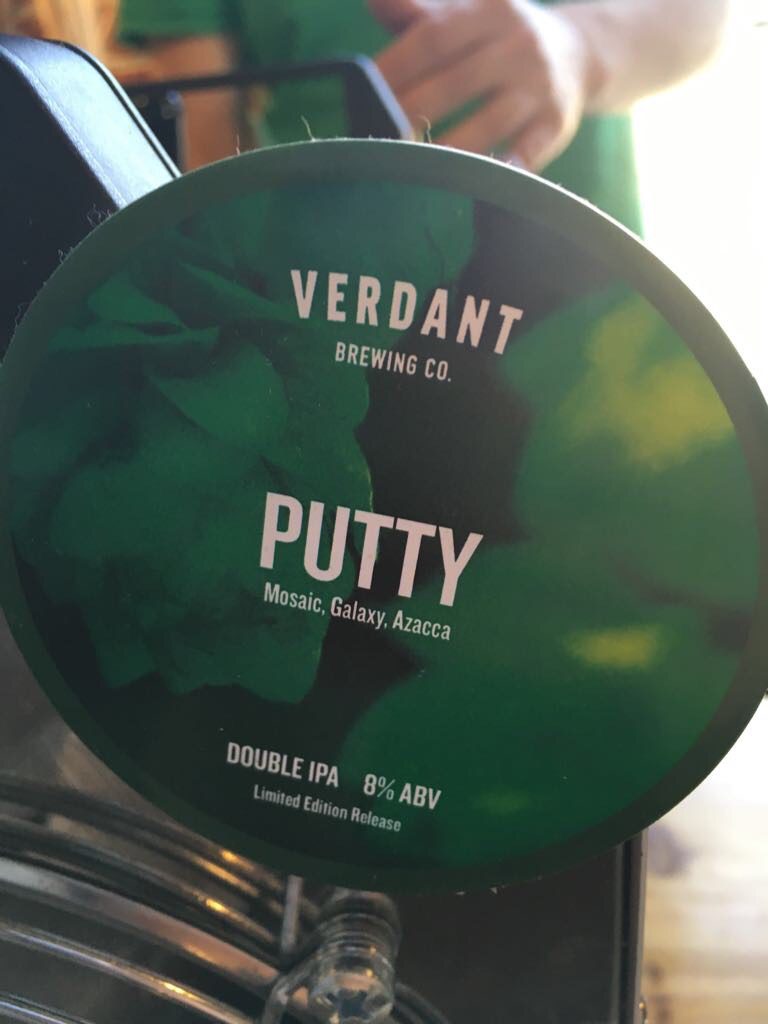 The weakest beer I drank was 4.7%. The strongest was 8%. And there wasn’t a single dud amongst them.

Here’s what I drank:

At beer festivals, choice can be overwhelming so my usual tactic is to start with a ‘walking around beer’, something light that I can sip on without paying too much attention.

But this wasn’t your usual festival, and a clean pilsner wasn’t really an option. Besides, I figured if I’m at a hop fest, I might as well start with something hoppy. This was a DIPA that was perfectly suited to the sunny weather we were blessed with – fruity, delicious and yes, hoppy.

This was my second beer and a bit of a let-down after the Verdant – maybe I’d peaked too soon? It was perfectly pleasant, light and with Belgian tones.

O/O Brewing is a small brewery based in Gothenburg, Sweden and now I have to go there. This beer was wonderful – an American style IPA that was hoppy with a slightly sour edge that made it one of my favourites of the night.

After stuffing our faces with food, we heading into the ground floor, where I’ve never been before: it’s usually a closed off world where the actual brewing happens: huge stainless steel tanks with the smell of hops drifting out. For the Festival a couple of fridges and a makeshift bar had been set up and that’s where I sampled a can of the Farmer’s Daughter, a saison I got along with very well.

I explained that I was also Kirsty, we high-fived, had a photo and I went on my way. Despite nominative determinism, this beer wasn’t my favourite. It smelled like coffee and tasted deeply savoury, putting it at the opposite end of the spectrum to my preferred witbiers and goses. Still: its name was KIRSTY! 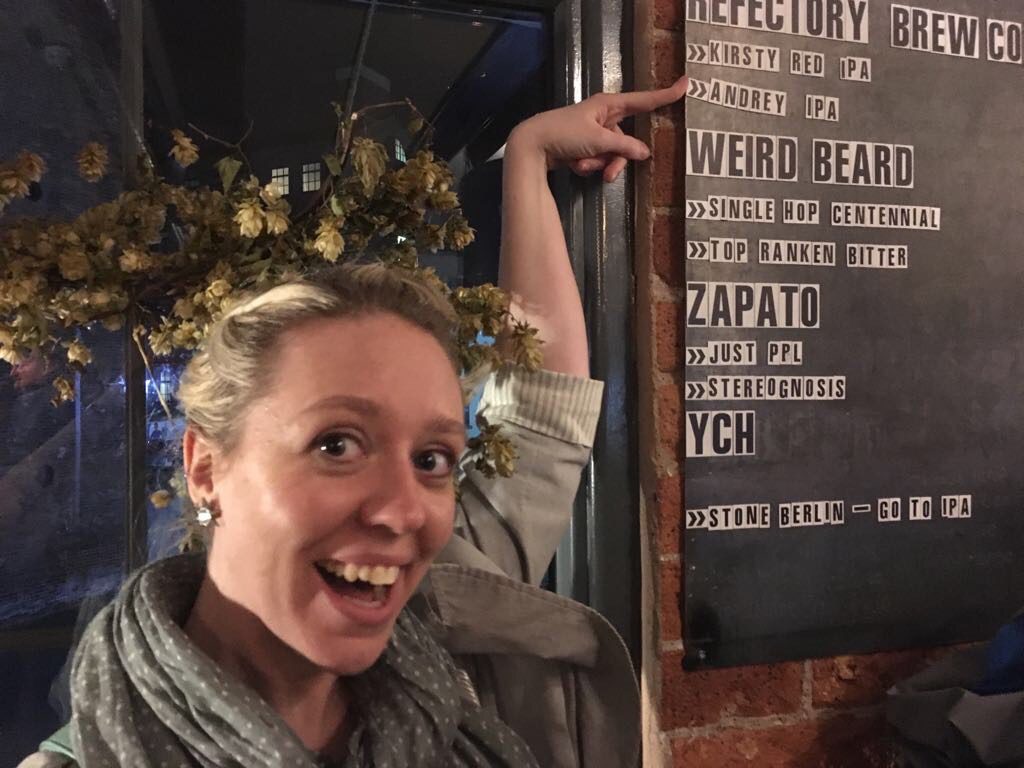 My last beer of the night, by which time I was pleasantly tipsy. Hoppy and fruity, with a slight taste of malty bread, this was a good one to end on.

The choice of beer was excellent, with some really special brews in the mix. Even our friend Natalie – not a beer drinker – found plenty to suit her palate, and I’d definitely be on the look-out for some of them in the future. Especially the Farmer’s Daughter.

I think we’re almost spoiled with street food in Leeds: between the monthly Belgrave Street Feast, the rotation of food trucks at Trinity Kitchen and countless events and pop-ups in between, there are so many opportunities to sample bits of cuisine you wouldn’t find in a restaurant.

The food selection at Hop City was excellent. Sadly I missed out on ParmStar, purveyors of a Teesside-born melted cheese and chicken concoction which is becoming my street food grail. But I managed to console myself with some Holy Crab crab balls (steaming hot seafood bites fresh from the fryer) and Dim Sum Su’s pork belly bao – a perennial favourite of mine: tender slow-cooked belly pork and veggies in a fluffy steamed bun.

You could also try Indian courtesy of Manjit’s Kitchen, burgers by Patty Smiths (the best burgers in Leeds for my money – they’re at the Belgrave), and My Thai which did, well Thai food.

I really enjoyed Hop City: it’s a fab addition to the Leeds beer scene, and provides a nice springtime counterpoint to the behemoth that is the Leeds International Beer Festival. You could tell that a great deal of care had gone into curating the line-up, with plenty of one-offs that you might struggle to find elsewhere.

I hope it comes back next year – not bigger, not better, but just as small and perfectly formed as it was the first time around.

Kirsty Scott took the images for this blog post as well as writing it. Cheers Kirsty!