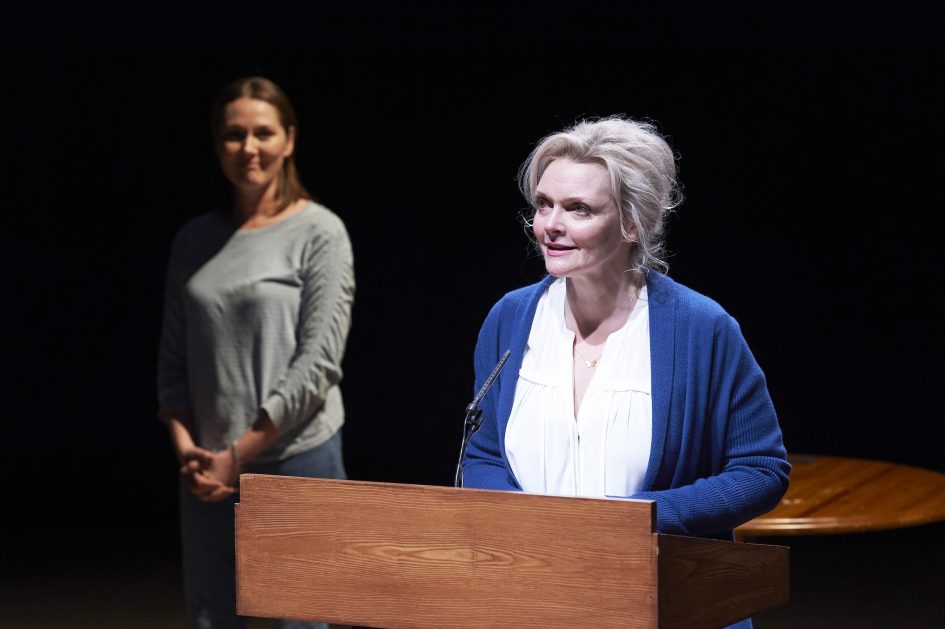 Ruth Gemmell as "herself" and Sharon Small as Alice. Photograph by Geraint Lewis.

Having enjoyed reading Still Alice a couple of years ago (as much as you can enjoy reading about something so sad) I was pleased to see that The West Yorkshire Playhouse was putting on a production of it, and even more pleased when I was invited to come and watch it.

Still Alice is about a highly intelligent and successful Harvard professor who is diagnosed with early-onset Alzheimer’s. The story follows her journey as the disease progresses, exploring both her relationship with her close family and also her mind.

The book is told in the first person and you can see how Alice’s forgetfulness develops over a couple of years through specific incidents, as well as Alice’s own awareness of the disease. This is done expertly on stage through the use of a second actor – Ruth Gemmell – playing Alice’s inner voice.

Alice is played by Sharon Small who is fantastic in this role. She is on stage for pretty much the entire show and plays the part with great sensitivity. There is no interval, which must be exhausting for Small, and also means that the audience gets no relief from the drama. You are completely captivated by the issues Alice and her family are facing and never break away from it. 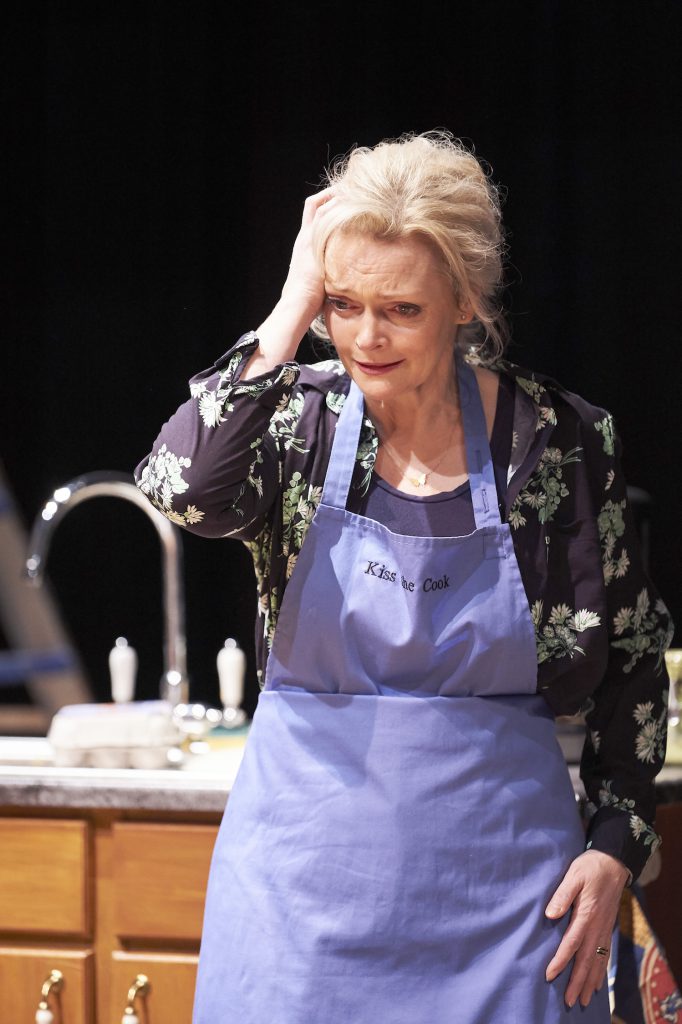 Through various incidents you get a real feel for how devastating this disease is. It begins with Alice starting to forget words and not knowing where she is on her regular running route. This intensifies when she doesn’t remember someone she was introduced to just a few minutes ago and when she ends up getting lost in her own house. Eventually, she doesn’t even recognise her own children at times and starts to forget who her husband is.

The furniture and household props play a big part in revealing the state of Alice’s mind in this production. At the start of the show, the stage is very busy with lots of furniture showing the different areas of Alice’s life. As the play progresses and her memory loss intensifies, pieces of furniture and everyday items are moved around, showing how Alice is losing the fixed certainties in her life, and are eventually taken away, leaving just two beach chairs on the stage.

One of the great things about this play is it shows the need for support for both the carers and the individual suffering from Alzheimer’s. In Still Alice, you see family members not knowing what to do, both in looking after Alice but also in leading their own lives. Through the use of an actor playing Alice’s inner voice, you also get a better idea of the frustration the individual with dementia feels, being talked over for example, or having people make decisions for them. In one scene Alice comments on how there’s no information for the person with Alzheimer’s, just support for carers. 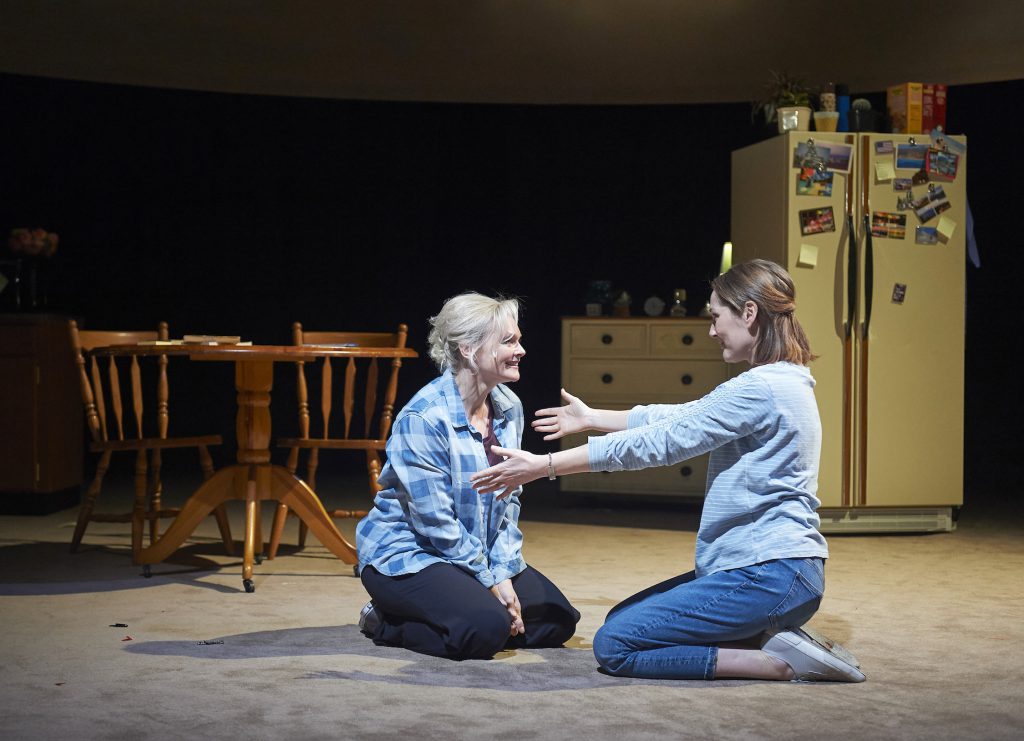 The production is part of the West Yorkshire Playhouse’s “Every Third Minute” programme – “A festival of theatre, dementia and hope.” The festival includes a range of productions which, in the words of James Brining, the Playhouse’s artistic director,  hopes to show “that a diagnoses of dementia is not necessarily something that should be looked at as ‘the end’…” This is echoed by the Playhouse’s consultant on Still Alice, Wendy Mitchell, who has experience of living with young-onset dementia. In the printed programme, Wendy says “It’s certainly a bummer of a diagnosis but in order to cope, I see it as the start of a different life, a life of adapting but one which can also be filled with laughter and new adventures.”

This hope does come across in Still Alice too. You really feel the confusion, panic, horror at the loss of dignity, frustration and sadness, but despite all this, there is some humour in the play and some moments of light relief. As the lights came up at the end though, you could see at least half of the audience wiping their eyes, so do be prepared for tears!

The Playhouse has developed dementia friendly performances (where technical and front-of-house adaptations include a quiet room, clear signage, additional staff trained to welcome people living with demential and their supporters, and a relaxed attitude to audience responses and movement in the auditorium) and has been working closely with people living with dementia.

Still Alice is a beautiful production. The cast are all brilliant (particularly Sharon Small), the staging is very clever, and the story manages to be informative without preachy, as well as emotive and relatable. It is on in The Courtyard Theatre at The West Yorkshire Playhouse until 3 March 2018. You can buy tickets here. 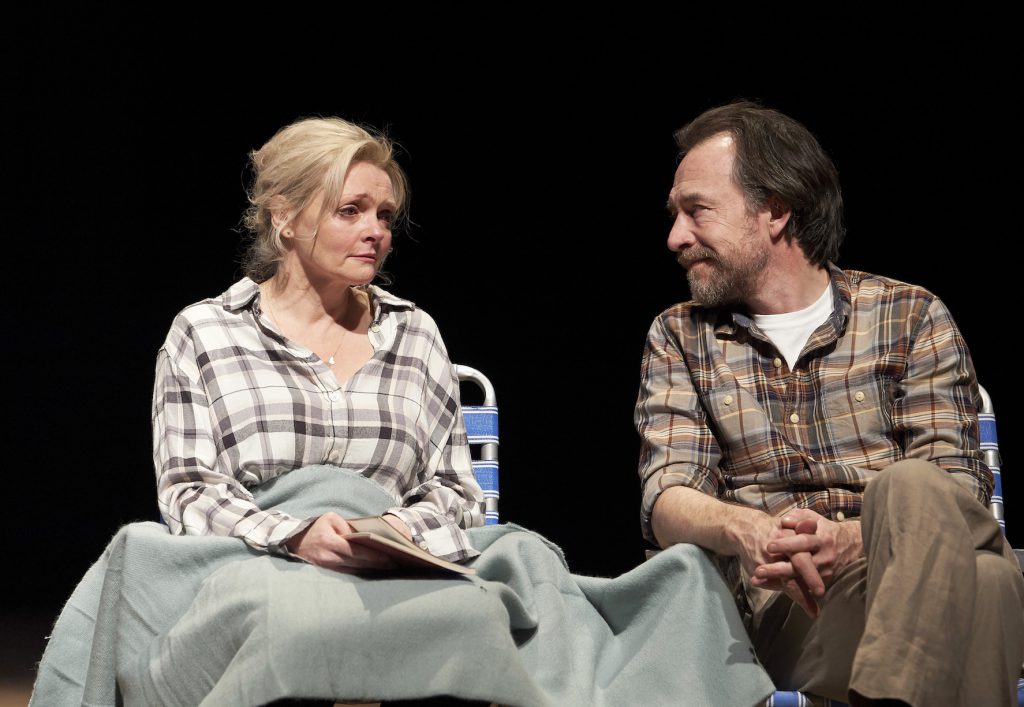