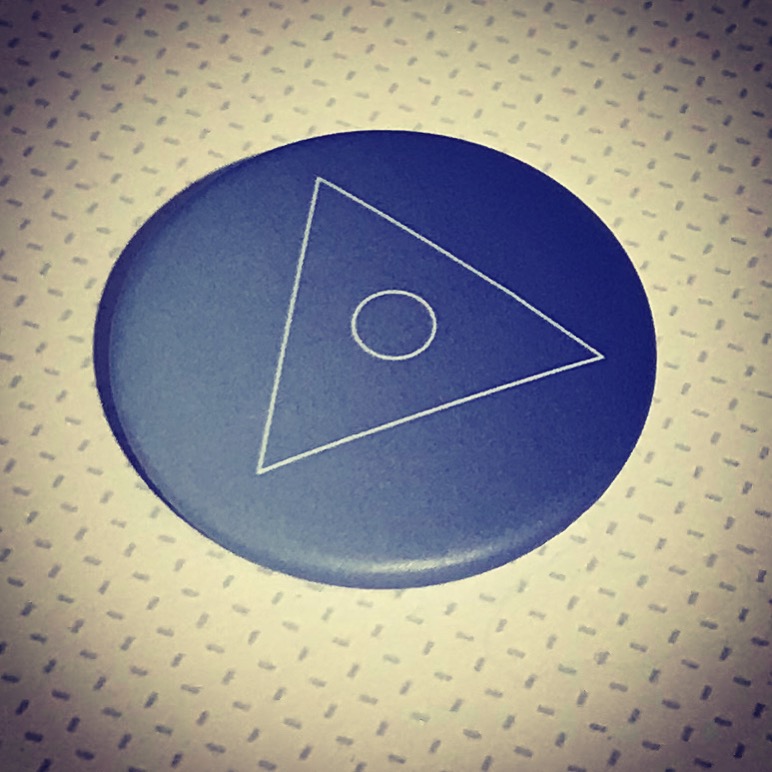 I have been doing something bizarre. Fun, and a little unnerving, but mainly bizarre. Before I continue, I should warn you that this is a long blog post, so go get yourself a cup of tea and a biscuit (take two – no one’s watching) and get comfy.

A couple of years ago, the innovative theatre company Riptide invited me to an immersive theatre experience in a warehouse. It was an unusual but fun evening, so when the company got back in touch recently to let me know about their latest project, I was intrigued.

Billed as “part theatre, part video game, part escape room” the month long experience – “The Lucky Ones” sounded unique. At £40 a ticket, it was quite a lot of money to pay up front considering I didn’t know any of the details, but I took a leap of faith and it’s been worth every penny.

After signing up, I kind of forgot about it to be honest, until one day I received a package in the post. Opening it up, I found a bunch of red carnations (really pretty!) with a card saying “Dear Hannah, Hope you have a lovely day, L x” and nothing else. Seeing as I don’t normally receive presents from secret admirers, I assumed that this was the start of The Lucky Ones. 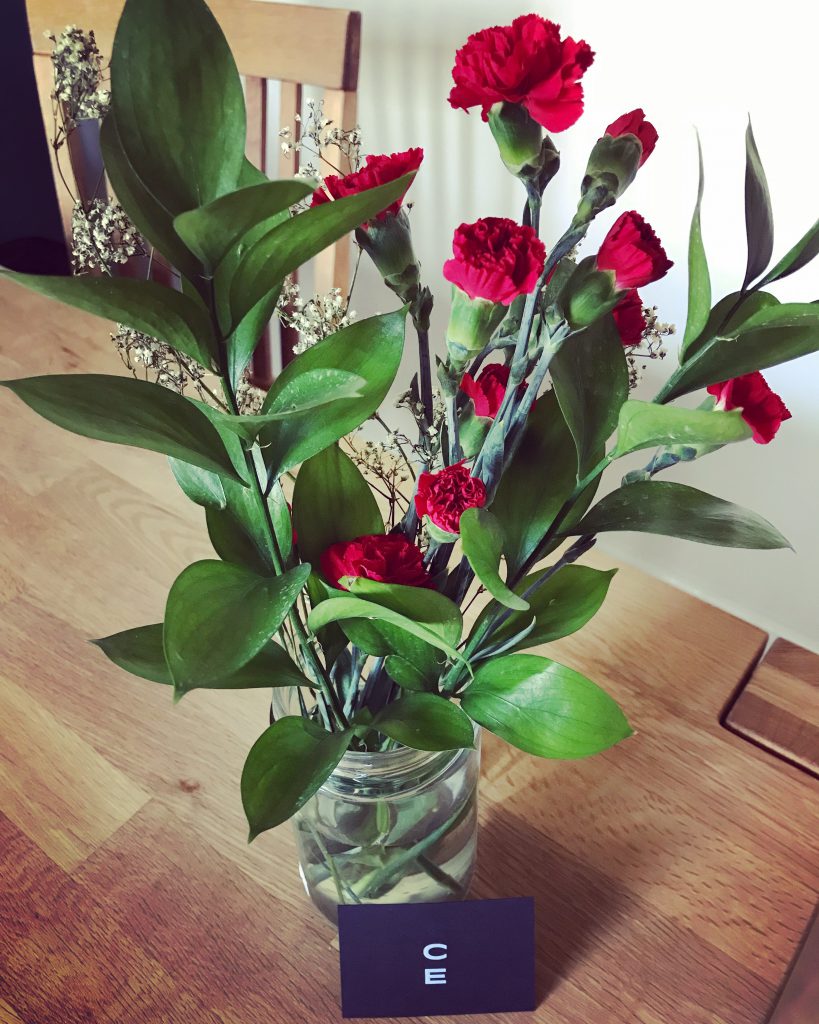 Receiving the flowers gave me mixed feelings that carried on throughout the experience. I felt excited and happy – who doesn’t like getting surprise flowers in the post?? – but also a bit unnerved to be receiving things at my personal address. (I did give my address – it’s not like the company stalked me to find it out!)

I then got a text from “Lucy” (the L on my card) saying that she was my Relationship Manager at Capital Experience and that my happiness was their primary concern.

A couple of days later I then received another text saying Capital Experience had something for me and asked if I could make it to Leeds Central Library. I told James what I was up to (you shouldn’t go off meeting strangers without telling anyone where you’re going!) and he said it sounded like the 1997 film The Game, starring Michael Douglas, where the main character is invited to take part in an experience that will change his life, blurring the lines between reality and fiction. We only got half way through before I had to get to my meet-up, at the point where Michael Douglas has been drugged and wakes up in a tomb in Mexico, so I was a little freaked out about taking part in this game, not knowing what I was getting myself into!

I got to the library and received a text telling me to enter the Local & Family History section and find a seat facing the clock. It was really weird wondering who was a player and who wasn’t (particularly the drunk guy on the steps trying to light up a joint!). It was quite exciting to know I was playing a game when there were other “ordinary” people around me just going about their daily lives. I did feel really self-conscious just sat there though, knowing I was being watched. I should say at this point that my absolute worst nightmare is audience participation, so this was probably not the best experience for me! When James and I went to see TapeFace at The Carriageworks, James ended up getting picked to go on stage, and I don’t think I’ve ever sweated more than when I saw TapeFace coming towards us pointing his finger in our direction.

At least Leeds Central Library is such a beautiful building. It was nice to be in it and admire the gorgeous ceiling and lovely shelves full of books and displays. I should have made the most of looking around, trying to suss out who else might be acting in the game, but I just felt too awkward.

A woman then approached me asking “Hannah?”, and after I confirmed that’s who I was, she gave me a brown envelope and then left. Giving myself a second to smile at this latest development, I then opened the contents. 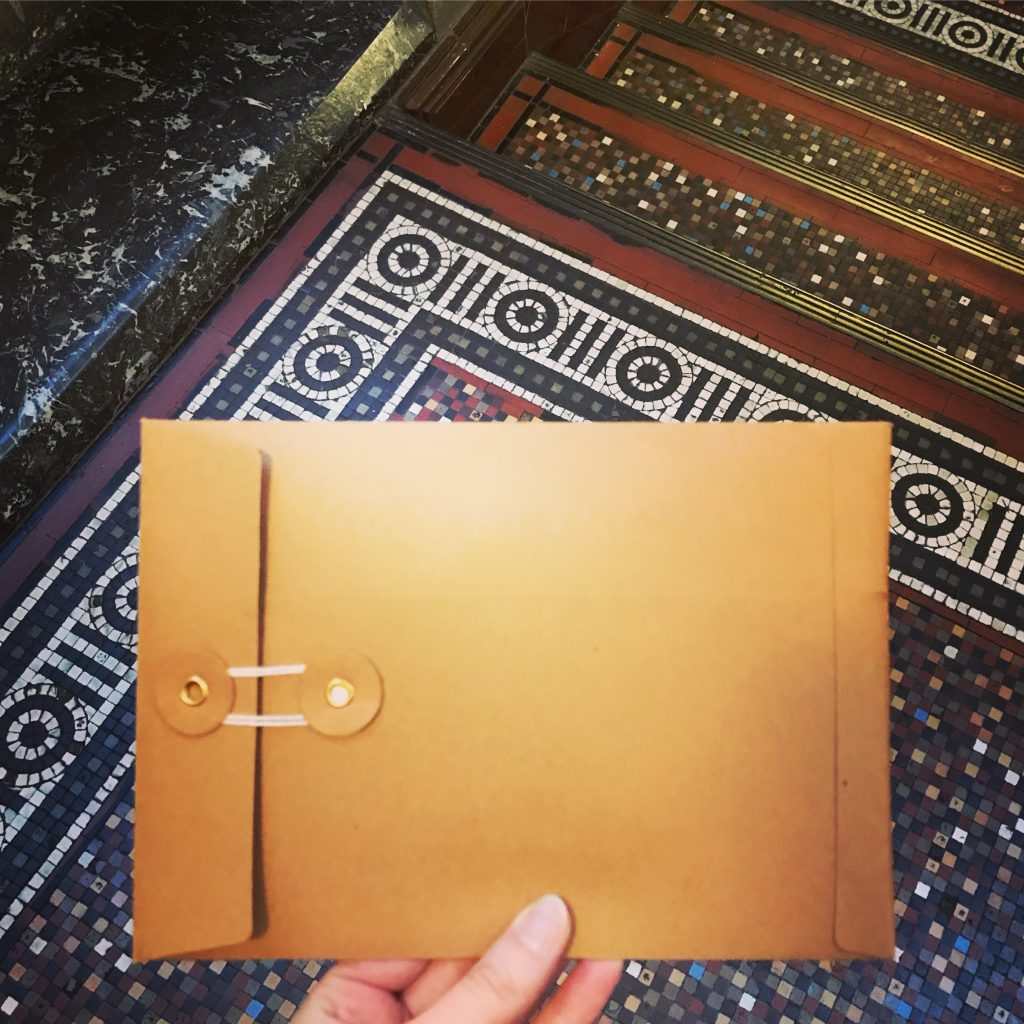 Inside there was a badge, a bar of my favourite chocolate (Lindt – make a note of that for future reference), part of a script, and two envelopes. The script was brilliant, just two pages, starting on page 5, outlining what had just happened. “…The camera settles on someone’s shoulder. It’s a woman’s. She’s nervous and looking around her… She’s meeting someone, but she’s unsure of where they are, or who they are… She feels a little unsure… She checks the messages on her phone… The woman notices someone coming towards her…” All so true! I was excited now.

One of the envelopes had someone’s address on, with a message on the other side saying “do not open” and the other had my name on with “please don’t mention this, L x” written on the back. I opened the latter up and saw that it contained a postcard with carnations on and a message written in code on the back. I was meeting friends to do the Waterstones book quiz and have a meal at George’s Great British Kitchen afterwards, so didn’t have much time to ponder over it.

Later that evening, I received an email from Lucy with an audio file saying that I had been chosen as one of the lucky ones, and that my life was about to change. Intriguing!

When I got home, I showed James the code and he immediately started trying to crack it. (I found it hard to get into, but he’s a gamer and loves these kind of things.) As soon as I realised how he was doing it, we were both on the case. Satisfyingly, we managed to work out the message, apart from a phone number (we knew it started with 077 and had another 0 in it, but that wasn’t much use!)

The message said that Lucy wasn’t around anymore and that I had to act quickly and ring the phone number, someone would then explain everything to me. Frustratingly, although we’d worked out the text very quickly, I couldn’t work out a way to decipher the phone number.

In the mean time, I had the second envelope which had “do not open” written on it, and the Leeds address of someone called “Max” on the front. I ummed and ahhed about opening it, and then decided not to – I’m not a rule breaker! – and I was a little intrigued as to how the story would continue if I didn’t open the secret envelope.

I text Lucy to let her know I’d cracked the code (apart from the number) and she replied saying she didn’t know what I was on about. From a separate number I then received a text saying that I shouldn’t have mentioned the code, and that I’d get what I need to crack the code when the time was right.

A couple of days later I received a handwritten note from Lucy telling me that Capital Experience was watching her (and me) and that she’d been acting against her better judgement. She also gave me a phrase that she’d use in case she was every compromised.

Nothing happened for a few days and then I received a text from Lucy at Capital Experience with the secret phrase, so I knew they were on to her, and a text from Lucy’s other number with a Reddit link to the code deciphered. This was the only frustrating part of the experience so far – I wanted a way to work out the number rather than just be given the answer, so I don’t know whether there was something I missed or whether it was always their intention to give the deciphered code.

I now had the phone number I’d been told to ring, but I didn’t make the call straight away. After audience participation, my second least favourite thing is ringing people I don’t know! Not knowing what to expect, I did pick up the phone the next day and called first thing in the morning, but there was no answer. Later in the afternoon, I received a call from someone named “Max.” He said that he was helping Lucy, who’d had to go underground, and that Lucy needed me to get something from her flat (are alarm bells ringing for you yet??). Getting into character, I said I’d do whatever I could to help Lucy and expose Capital Experience.

Max text me later asking when I could go to Lucy’s flat, and that he’d send further details on the day. Whilst this was going on, I also received a message from “Adam” (are you keeping track of the characters?) saying that he was my new Relationship Manager, my happiness was still their primary concern, and that previous employees may have “overstepped the mark” and that it was being dealt with internally. I played along and thanked him for the update.

The day had arrived for me to go to Lucy’s flat. By this point, I’d told a few friends about the game I was playing, and a lot of them sounded horrified. They thought it sounded very dodgy to turn up to a location I was only given on the day, on my own, to meet someone I’d never met before, to do I don’t know what. Now I’ve written that out, I can see why they were a little concerned! 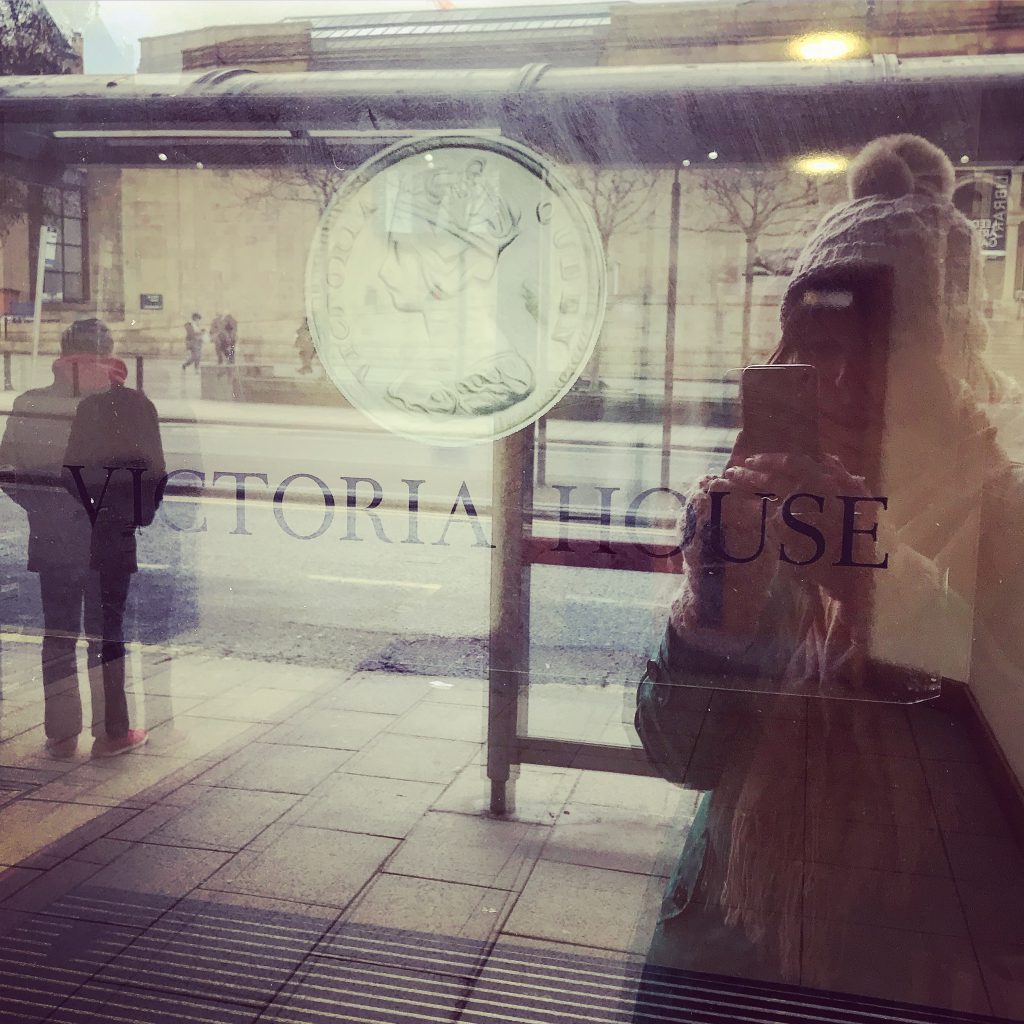 Max told me to go to Victoria House (part of a building opposite the Art Gallery which I’ve never noticed before) and to enter the door code he provided at exactly 12:30. Inside, his contact would be waiting for me. I hovered outside the door, pretending to be all nonchalant at the bus stop, and when the time came, I entered the four digit code and stepped inside…