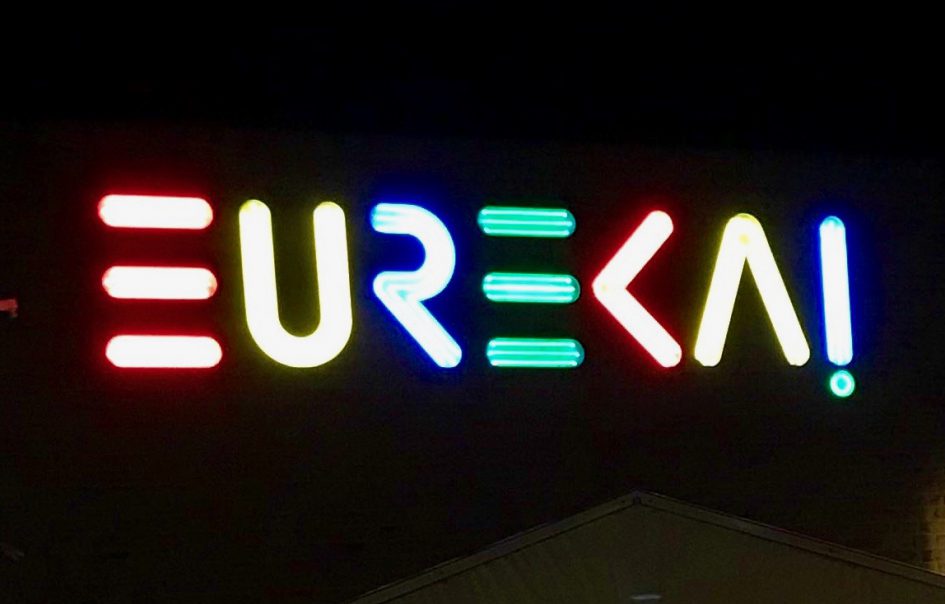 If you’re from Yorkshire, it’s likely that you will have visited the award-winning children’s museum Eureka! at least once. You will probably have very fond memories of the place, and will be able to recall favourite parts of the museum, whether it was standing in the giant teeth or pretending to be a grown-up in the mini supermarket.

Now that I’m a parent, I’m really looking forward to being able to take my son to Eureka!, and joked on Twitter that the only reason I’d had a child was so that I could go back to the museum. Sophie from the Eureka! comms team replied saying that they now put on adult-only events and that the next one was coming up. (So if you were planning on having kids just so you could visit, hold off for now – going to an adult-only evening is much easier and less painful than labour and raising a child!)

Not only was there a Late Night coming up, but it was Crystal Maze themed – even better! Eureka! put on its first “Late Night” back in October last year, and held a second one – “Lates in Space” – in March. I wasn’t planning on writing a blog post about the Crystal Maze Late Night, with it being in Halifax rather than Leeds, but we had SUCH a fun evening and I had so many friends tell me afterwards that they were gutted they didn’t know about it, I thought I’d best write a post to share the word.

Luckily my mum was around when the Late Night was on so she kindly babysat for us so both James and I could go (two lots of babysitting in one visit – thanks Mum!). We met up with our friends Kirsty and Ed who are the perfect team to play games like this with – Ed for his level-headedness and Kirsty for her general excitement and enthusiasm.

As soon as we walked up to the museum I got excited. I really did just feel like a kid again. Waiting in line and seeing Archimedes lowered into the bathtub made me feel like it was Christmas.

There were eight Crystal Maze style games dotted around the museum, each led by a member of the Eureka! team. I’d told myself that I wasn’t actually that bothered about the games and was happy enough just to be in the museum again. But I’d forgotten how competitive I get, particularly when I’m with Kirsty, and the night was no longer about having fun – IT WAS ABOUT WINNING!

The first game involved one of us moving boxes from one area to another, but having to follow strict rules. James took up the challenge of physically moving the boxes whilst we loudly shouted instructions at him. (Luckily we’ve been playing some Nintendo games together recently and so are On It with understanding brief instructions barked at each other.) One game down, one “crystal” unlocked.

For the next game, we were each given an aerosol can which we had to use sparingly to see where a laser beam was and then go under or over without touching it at all. Ever since I watched Entrapment with Catherine Zeta-Jones I’ve wanted to do something like this. All of us set off the alarm by accidentally touching a laser apart from Ed who managed to do it and win another crystal (we were at two for two at this point.) Even if we hadn’t won a crystal, it would have been worthwhile as it was hilarious. Seeing the commitment Ed and James gave to the task, walking like goblin crabs, was amazing.

After a break for some food and drink, we then moved on to task number three – moving a ball around a maze with a remote control/iPad. Definitely James’ game! With no help from us, he scored us our third crystal.

The fourth task we went to was a robot reading riddles. Riddles! This would be where Kirsty and I could shine! We’re good with words! And yet… it was the only task that night that we failed. Oh the shame! Some of the riddles were slightly smutty, which was perfectly in keeping for an adult-only event after a couple of drinks. Some riddles we got, some we didn’t, but the most frustrating one was where all of us shouted out the wrong answer and then a split-second later KNEW it was wrong. (“How many months have 28 days…”)

Never mind, on to the next game. This was a matching-pairs game and luckily Kirsty and I aced it, redeeming ourselves from our previous epic failure.

Our sixth task was a shooting game, which Ed completed with style, winning us another crystal.

For the penultimate task we had to rummage through a box with balls in (cue childish sniggering) to find a ball with a combination written on it, and then try the combination to open a locked box.

I took the lead for the last game which was inside the bank section of the museum. I had to read out clues on each safe to get a numeric answer to crack the lock. Another win for Team (oh, we didn’t have a team name. That’s not like us! We’ll come up with a post-event team name and I’ll get back to you).

We just managed to finish in time, and had our victory photo taken, pleased with our seven out of eight crystals. 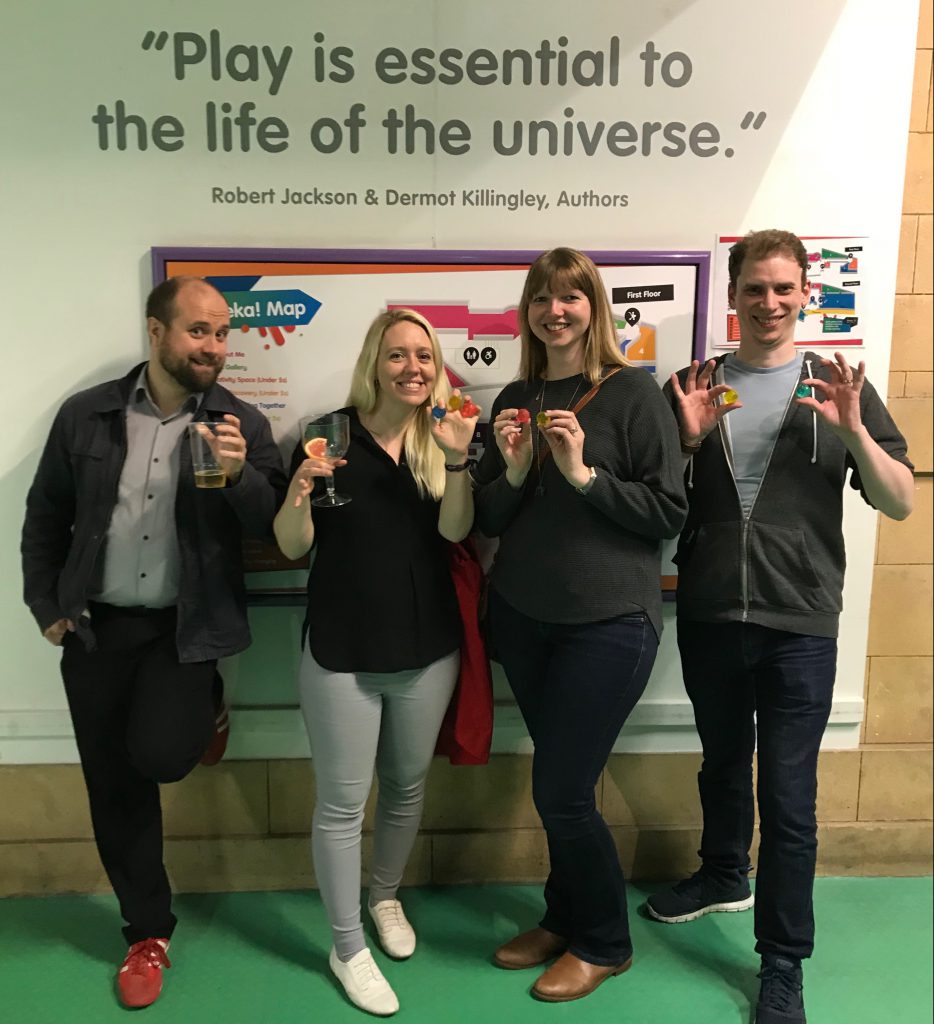 In between playing the games, we managed to fit in some time to explore the museum. Despite having to go to the supermarket as an adult and hating it, it is still so much fun to play shopping! I enjoyed running around with a mini trolley whilst Kirsty loved playing on the tills. We had great fun taking lobsters and baguettes up to the cashier’s desk. Being in the bank (something I loathe in “real life”) was equally fun.

The whole evening was brilliant: the staff were friendly, enthusiastic and confident leading the games; the food was amazing – it was both delicious and good value (I actually assumed it was an external vendor but it turns out it was by the museum’s on-site cafe!); it was nice to be able to enjoy a drink or two (and felt suitably mischievous to be drinking alcohol in a children’s museum); and even the 90s music was perfect and just added to the atmosphere. I think it’s the first time I’ve heard Jessica Simpson’s “I Wanna Love You Forever” in well over a decade – what a song.

We had a brilliant time at the Late Night. If you’re a massive Crystal Maze fan you might have been a little bit disappointed – you don’t get members of the team being locked in if they fail a task, and there’s no big money grab in a windy crystal at the end, but if you like escape games, childish fun, and just doing something a little different, you would love this.

If you fancy visiting Eureka! on one of their normal days, it’s a great family day out, suitable for 0-11 year olds (although I’ll probably wait until JJ is at least 2 before I take him). They also have events for just toddlers and clubs for disabled children. Visit their events page to see what else they’re doing throughout the year.

The next Late Night will be held around Easter time next year. To be one of the first to hear about it, sign up to Eureka’s Late Nights mailing list.

Escape game, Out of Leeds